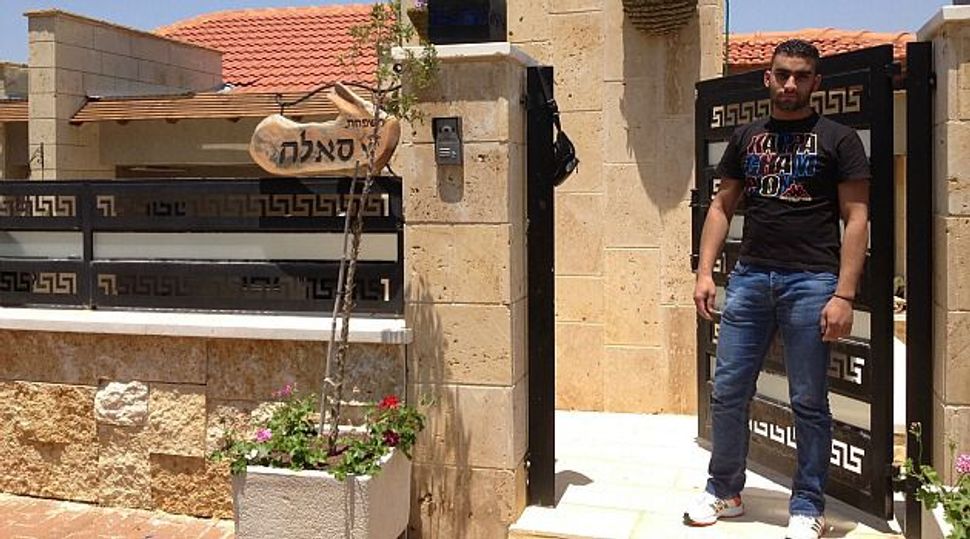 The founding ethos of this town in the Lower Galilee, adjoining the ancient city of Nazareth, hits the visitor upon arrival.

The town looks down directly on Nazareth, a large Arab-populated city.

The two municipalities are divided by Zionism Street, a road decked with large Israeli flags — the type normally seen on a border crossing. And indeed, psychologically this is a border. It demarcates the line between the old Arab city and the new state-built city.

But today, Nazareth Illit, which was conceived and developed by Israel’s first generation of leaders explicitly to counter the majority Arab presence in this part of Israel, is in reality an ethnically mixed city. With a population of 40,600, the percentage of Arabs living within its boundaries — 17.6% — is not much less than that of Haifa, a long historically mixed city that is 19.5% Arab.

But no one would ever confuse the two cities’ stances toward their respective demography.

At the end of May, Haifa named a square after the Arab author and politician Emile Habibi, whose previous honors include the Al-Quds Prize from the Palestine Liberation Organization. The city unfurled its newly named square during the local Arab Cultural Festival.

Just 30 miles away in Nazareth Illit, even library books in Arabic are considered too large a concession to the non-Jewish minority.

In one of the city’s well-stocked libraries there are plentiful collections in Hebrew; in Russian, for the large immigrant population, and even — despite the rarity with which it’s spoken here — English. But when I asked the librarian if there are any Arabic books, she stared down at her computer with a curt “no.” Any plans to get some? “No.”

Though Israel’s Central Bureau of Statistics, the government demographics authority, has formally designated Nazareth Illit as a mixed city — a label the bureau gives to just seven other cities — the town’s mayor, Shimon Gapso, insists otherwise, regularly and publicly.

“‘Nazareth Illit is a Jewish city.’ I say that a few times every day, and everyone who wants to come here needs to know that,” he told the Forward.

The Arab minority in the 57-year-old city has grown significantly over the past two decades and continues to grow. By virtue of the fact that courts here no longer tolerate racial or ethnic discrimination in housing, there is little Gapso can do to change this.

Gapso’s stand has nevertheless pushed against the constraints of Israeli civil equality laws to create a distinctive anomaly: The city provides individual and household municipal services equally to its Arab and Jewish residents, from trash collection to social services. But when it comes to the public sphere, Arabs are invisible wherever the law allows.

“The municipality wants us to treat Nazareth Illit like a hotel,” said Raed Ghattas, one of the city’s two Arab councilmen. “It wants us to sleep here, [but] wake up and conduct our activities, in schools, offices and in culture, outside of Nazareth Illit.”

Most of the Arabs are Christians, but one wouldn’t know it at Christmas time. In 2010, Gapso stopped a plan that would have placed Christmas trees in some public places. “As long as I’m mayor, there won’t be Christmas trees or any other non-Jewish symbol,” he said at the time.

The biggest complaint in the Arab community is that it doesn’t have a school. Israel’s public education system is divided into Jewish and Arab sectors. And while Arabs are free to enroll in Nazareth Illit’s Jewish-sector Hebrew-speaking schools, most prefer Arab-sector Arabic-language schools. But there aren’t any in Nazareth Illit. Building and opening new schools is a municipal responsibility. As a result, some of Nazareth Illit’s 1,900 Arab children spend as much as three hours on connecting buses each day getting to and from school in Nazareth.

The Association for Civil Rights in Israel has taken up the local Arab residents’ battle to establish schools. “Arabs have the right to be there, so they should have the full right for education, which means schools in their language,” said Auni Banna, the group’s attorney, in an interview.

But Gapso has vowed to oppose their establishment, and told the Forward, “There will never, never be an Arab school in Nazareth Illit.”

For critics, Gapso’s bold assertion raises serious questions about local democracy in Israel. But Gapso insists he’ll hold firm no matter how much his town’s Arab population grows. He said rhetorically, “If the population of Nazareth Illit is 99% (Arab) and I will be mayor, there won’t be an Arab school.”

The situation in Nazareth Illit should not be confused with the one existing in Jerusalem. There, the Arabs, who make up about 30% of the population, mostly don’t have Israeli citizenship, while Nazareth Illit residents do; high poverty levels also afflict Jerusalem’s Arab residents, and a vast disparity in municipal services is evident between the city’s Jewish and Arab sectors.

“We pay council tax and get services,” said Sliman Salach, standing outside his family’s $1 million-plus home.

Like many of Nazareth Illit’s Arabs, the Salachs are wealthy émigrés from Nazareth, where property is in short supply and the city has little room to expand, in part due to government land expropriations that originally made Nazareth Illit possible. Disappointed by what they regarded as poor municipal services in Nazareth, the Salachs came to Nazareth Illit simply looking for good homes in well-kept neighborhoods.

“In Nazareth we paid council tax and didn’t get the services,” added Salach, who is in his 20s and works in the family’s manufacturing business.

Many would view the scene of Sliman Salach making his way to work each morning as the pinnacle of a peaceful and desirable Israeli Arab prosperity. With his modern dress and gelled hair, Salach departs from an expensive home in a mostly Jewish neighborhood where he doesn’t trouble his neighbors.

But Gapso’s perspective finds clear support among at least some of Nazareth Illit’s Jewish residents. One local woman, who spoke to the Forward as she waited for a bus, but on condition of anonymity, said that the situation was simple. “I don’t want Arabs, it’s a Jewish city,” she explained.

Teacher Dovi Holtz was happy to go on record. “I don’t believe they should come,” he said. “If a Jew went to buy a house in Nazareth, they would stone the person, but there’s supposedly no problem when they come to take over a Jewish city.”

Unable to stop Arabs from moving in, Gapso today speaks, instead, of diluting their presence. With various other loopholes for restricting residency to Jews closed today, there’s only one legal way to do this: Designate new housing for the Jewish ultra-Orthodox; it’s a practice permitted under Israeli law as a kind of affirmative action for a minority — Haredim — as opposed to prohibited exclusivity for the general Jewish majority.

And so, when driving through the city, you see a huge construction site where, starting in 2014, 3,000 Haredi families will take residence. They will, in all likelihood, represent a lower socio-economic stratum than the Arabs who move in, but Gapso believes it is good for the future of his city.

“I prefer Haredim,” the mayor said, adding that with the coming of these families, “it will stay a Jewish city.” Under Gapso’s plan, the neighborhood will eventually expand to house 18,000 Haredi families.

The insistence that Nazareth Illit is Jewish has been drummed into locals since its establishment. The city was established in the 1950s specifically as a Jewish city, a routine practice in planning and development back then. Designed as part of a broad mandate to “Judaize the Galilee,” Nazareth Illit was planned in such a way that it restricted the growth of Nazareth and other Arab locales nearby. Israeli leaders intended for the town to help counter the huge demographic presence of Arabs in the area.

Holtz, who previously lived in Modi’in and moved to Nazareth Illit in 2009 out of an ideological desire to strengthen the city’s Jewish character, cites local history as justifying the effort to keep Nazareth Illit Jewish. “Ben-Gurion built this city to make sure there is a Jewish presence in the Galilee,” he said. “Since the whole point of building the city was to have Jews in the Galilee, people who talk about it no longer being a Jewish city defeat the object of building the city in the first place.”

But Arab residents say that only the narrowest reading of history can be used to support the case for a Jewish Nazareth Illit. Most of the land for the city was expropriated by the state in the 1950s from Nazareth and from other neighboring Arab villages, including from private landowners. The private owners were entitled to compensation in accordance with the British mandatory law that Israel inherited — just below the pre-expropriation value of the land. But the efforts of their representatives to challenge the expropriation through legal channels failed.

“Why a Jewish city?” asked Ghada Arbid, a retired Arab teacher who has lived in Nazareth Illit since 1985. “It’s built on Arab lands.”