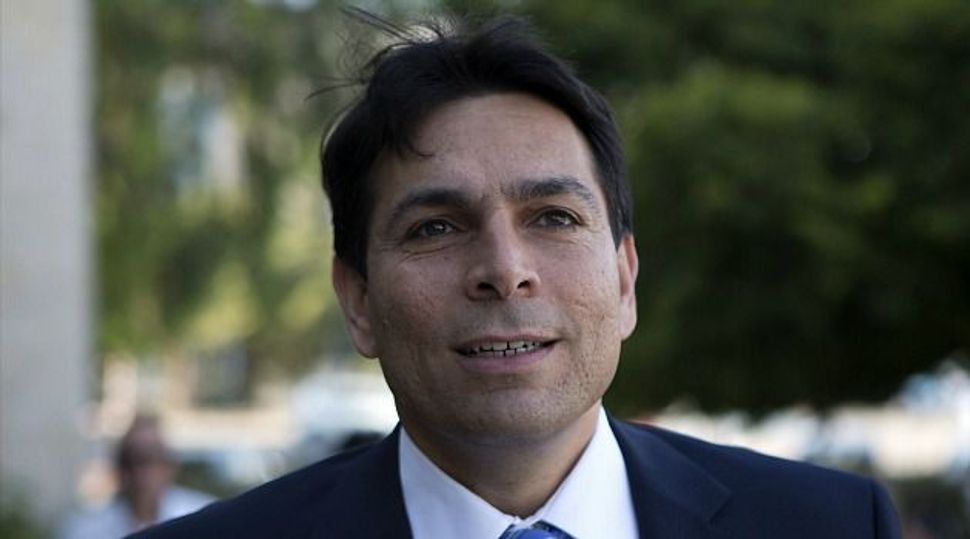 As Secretary of State John Kerry desperately tries to kick-start a renewal of negotiations for an Israeli-Palestinian peace agreement, a newly crowned King of Likud is intent on sabotaging its realization.

Internal Likud elections held in late June underscored an emergent paradox: While Prime Minister Benjamin Netanyahu insists that he is interested in pursuing a two-state solution that would create a Palestinian state, by some reports on as much as 90% of the West Bank, he’s being sidelined within his own party by a man who has left no doubt that his aim is to build the party as a barricade against a peace deal.

“The Likud party is still the party of the national camp of Israel, still the party that believes we have rights to the land in Judea and Samaria, and I think that the majority of the party still isn’t supporting the idea that there will be a Palestinian state in our backyard,” said Danny Danon, Israel’s outspoken deputy defense minister, who became chairman of Likud’s central committee after the June internal elections.

Danon, who replaced a Netanyahu ally, has embarrassed the prime minister repeatedly with comments that openly flout the government’s official line on peace negotiations. In an interview with the Forward, Danon’s first international media interview since assuming the party leadership role, Danon did not back away from his positions.

“I understand the importance of political power, so I will use my strength and influence to convince as many people as I can within the party and outside the party that a Palestinian state is bad news for Israel,” he told the Forward.

Danon is no outlier. In the recent Likud elections, all the major positions in the party infrastructure went to Likudniks significantly to Netanyahu’s right — some of whom propose the annexation of large parts of the Israeli-occupied West Bank. This political dissonance could, in the event of a peace process breakthrough, catapult internal Likud politics to international center stage from a domestic game of political inside baseball.

Danon himself is resolute that any peace proposal must go for a vote before the central committee — and he is “sure” that the party won’t accept any deal that matches the international community’s expectations for a two-state solution, namely one based broadly on 1967 borders and involving a division of Jerusalem.

During his interview, which took place July 2 in his Knesset office, Danon tried to maintain a restrained tone regarding his ideological foe Netanyahu, saying that they will cooperate for the good of the party. But with what seemed to be a pointedly chosen reminiscence, he explained his desire for “political power” — and implied that his eagerness to become a lawmaker in the first place stemmed from a need to stop Netanyahu from making concessions.

He recalled the run-up to Netanyahu’s 1997 agreement with the Palestinians to pull back Israeli military presence in Hebron, saying: “There was an event in the Knesset, and [then-Likud lawmaker] Benny Begin spoke very nicely about the rights of Jews in Hebron, and at the end of the speech, I asked him, ‘Mr. Begin, what do we do tomorrow, the next move? [Begin said:] ‘I spoke, I did my share,’ and then I realized that in order to make an influence, you need to speak about your rights, about what you believe, and you also need to have the political power to promote your ideas.

“That is the reason I’m active politically in the party and not only speaking and writing books. I do that also, but I understand the importance of political power,” he said.

Danon was a strong opponent of the state’s evacuation last year of Migron, a West Bank settler outpost erected without government authorization on privately owned Palestinian land. He fought against other West Bank evacuations as well. In addition, Danon has promoted various legislative initiatives that critics have decried as anti-democratic, including a law imposing sanctions on Israelis who speak out in support of boycotting settlements.

Danon wants Israel to annex significant parts of the West Bank, as does the new head of Likud’s ideological committee, Zeev Elkin, the deputy foreign minister.

Despite Danon’s confidence that Likud will block a peace deal, he concedes that he could have a fight on his hands, as a deal on the table would seem tempting to some Likudniks. With “a prime minister endorsing such an accord, it will not be easy, ” Danon said.

Of course, Danon’s barricade plan relies on Netanyahu actually taking any draft peace agreement before the central committee. But couldn’t he short-circuit the committee? This is a simpler scenario than the much discussed possibility of Netanyahu ditching his party and setting up a new one, like Ariel Sharon did to facilitate the 2005 Gaza disengagement.

This is a gray area. There isn’t actually any written clause that Netanyahu would need to take a peace deal to the central committee. After all, the Likud party was established by people who were ideologically opposed to territorial pullbacks and who didn’t dream of formulating clear rules for a scenario in which the party’s leader might back such plans. The trail for clues as to how the process may play out leads to the Tel Aviv law office of Michael Kleiner, president of Likud’s internal court.

Kleiner, a lawmaker for the best part of two decades from 1982, was newly selected as court president in the recent elections. He adjudicates on violations of party process, and therefore, if Netanyahu pushed forward on a peace deal without going to the central committee, he would rule on whether this is acceptable — or assemble and determine the membership of a panel of five Likud judges.

Kleiner is secular, but in his office hangs a large portrait of the late Lubavitcher rebbe Menachem Mendel Schneerson. Nearby, there is a bumper sticker with a saying attributed to the rebbe: “The passing of territories — danger to Jews.” On another wall there is a picture of Jerusalem with the Golden Dome erased and the Third Temple rebuilt where it stands.

During an interview, he said that he has “limited” his freedom to promote his own political opinions in order to take up his new post as party justice, and that he refuses to pre-empt and pass judgment on the question of the central committee’s role in a draft peace agreement, as it is a possible future case. However, he pointed out that the Israel-Egypt peace treaty of 1978 was approved before the central committee. He knows this because he was actively opposing it at the time. And he made it clear that his desire to preside over the party court stems from his belief that Likud is a “tool” for a “strong Israel.”

Kleiner strongly opposes a Palestinian state, believing that the “arguments against the two-state solution are much stronger than the arguments against the one-state solution” and that while Israel faces a demographic threat, “it’s better to have a million Arabs in our pocket than a million Arabs behind our back”. Still, he sees less of a prospect than Danon that it will become a real possibility.