Ron Dermer, New Israel Envoy, Not Shy To Boast of Ties With Netanyahu 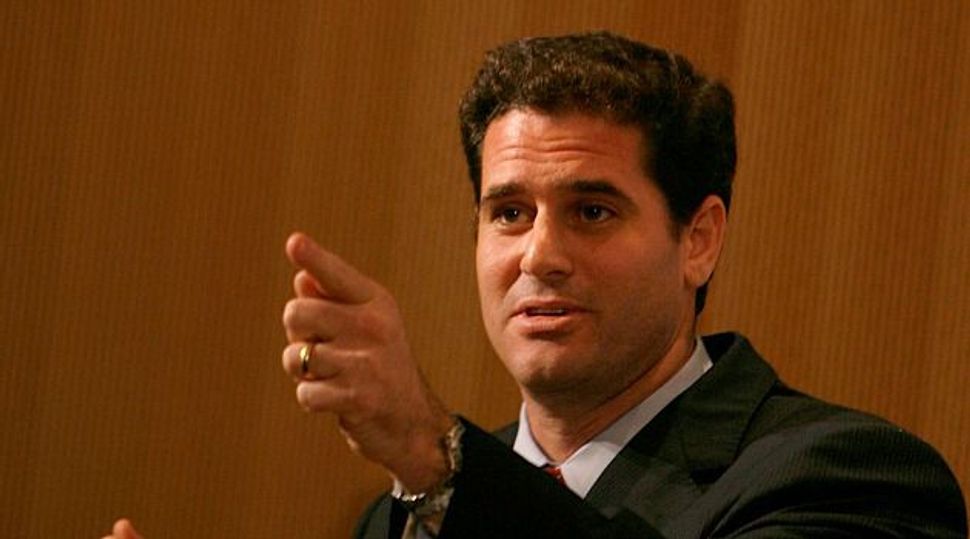 Bibi?s Guy: Ron Dermer is famously loyal to Benjamin Netanyahu. Is that a problem now that he is representing all of Israel as the ambassador to the U.S. ? not just one man? Image by jta

(JTA) — “I was with him when…” was the theme of Ron Dermer’s speech to the 2009 American Israel Public Affairs Committee conference.

Dermer used the phrase five times in the first five minutes of the speech — the “him” being Benjamin Netanyahu.

“I can shed a little insight into the mind of the Israeli prime minister,” Dermer told the crowd. “Because on that I’m something of an expert.”

Two elements of the address, made just weeks after Netanyahu assumed office, explain Dermer’s ascension this week to the country’s most important diplomatic post, the ambassadorship to Washington.

Dermer has a closeness to Netanyahu so steadfast that it does not inhibit his brashness in boasting about it. And Dermer utterly buys into Netanyahu’s most cherished notion about himself — that he has been right when others have been wrong.

“He’s a man of basic core convictions who has time after time been willing to stand against the current when it was not popular,” Dermer told AIPAC.

Born to a family of conservative Democrats in Miami — his father and brother are both former Miami Beach mayors — Dermer, 42, served as Netanyahu’s top adviser from his assumption of office in March 2009 until his new term began in March of this year.

But Dermer is known for more than just loyalty to his boss. His reputation is as a brash political player dismissive of those with whom he disagrees.

He is rumored to be the one responsible for news stories about Obama’s supposed snub of Netanyahu during his 2010 White House visit. And Obama administration officials believe he was behind Netanyahu’s perceived tilt toward Mitt Romney in last year’s presidential election.

“To me, it’s not an ideal choice as he’s seen as extremely political and as someone who has repeatedly gone to the press with negative stories,” a former Obama administration official told JTA. “You want someone trusted and discreet to be your ambassador.”

Dermer’s reputation raised eyebrows when his name first surfaced earlier this year as a possible replacement for Michael Oren, the historian turned diplomat who will wind down his tenure in Washington this fall. But leaders of mainstream Jewish groups, which lavishly praised the pick on Tuesday, said those muddied waters were under the bridge. “He’s coming here as ambassador to the United states, not to get involved in partisan politics,” David Harris, the American Jewish Committee director, told JTA. “The prime minister knows it. He knows it.”

Abraham Foxman, the Anti-Defamation League’s national director, noted that Dan Shapiro, Obama’s envoy to Israel, once was closely identified with positions that upset the Netanyahu government. In his previous position, as the top Middle East official on the National Security Council, Shapiro took the lead in pressing Israel to freeze settlement expansion.

“The relationship is bigger than political nuance,” said Foxman, who added that since Obama’s successful March visit to Israel, the tensions that once divided the governments have passed.

Passed, perhaps, but difficult to forget. Unlike Shapiro and other functionaries turned ambassadors, Dermer made the case for his boss in an abrasive tone. In 2011, he declined a New York Times request for an Op-Ed in a letter that was later leaked to The Jerusalem Post.

“It would seem as if the surest way to get an Op-Ed published in The New York Times these days, no matter how obscure the writer or the viewpoint, is to attack Israel,” Dermer wrote.

Dermer immigrated to Israel in 1997 after several years of involvement in Republican congressional politics. He drew close at first to former Soviet political prisoner Natan Sharansky, co-writing with him “The Case for Democracy,” a book that President George W. Bush later cited as a major influence. In the book, Sharansky treats Dermer as a full partner in shaping its ideas.

Through Sharansky, Dermer met Netanyahu, and they also forged an immediate closeness. Netanyahu, the finance minister in the mid-2000s, sent Dermer to Washington as economic consul.

Dermer lets little stand in his way. Oren — also U.S. born and beloved by the U.S. Jewish community — wanted to keep his job, insiders say, and the only reason he was removed is that Dermer wanted the envoy post.

Long before Dermer was formally named as the new ambassador, he was taking calls from Jewish schools and synagogues in Washington eager for his membership.

Oren and his two predecessors, Salai Meridor and Daniel Ayalon, made outreach to the U.S. Jewish community a hallmark of their tenure. Oren in particular was sensitive to anger in the Jewish community over Israel’s perceived discrimination against women and helped broker a tentative compromise that would allow for egalitarian prayer at the Western Wall.

In 2009, Dermer said he considered cultivating ties with the American Jewish community’s liberal wing a waste of time. Dermer is believed to be behind the liberal lobby J Street’s inability to secure meetings with high-level officials during its Israel trips. Oren, by contrast, has forged low-level ties with the group.

Dermer also led efforts in the Prime Minister’s Office to ban foreign funding of human rights groups in Israel, likening the groups that accepted such funding to agents of foreign powers. Some of the groups have the support of leading Jewish liberal benefactors from the United States.

Dermer’s defenders in Washington say those issues are dwarfed by the immediate challenges facing Israeli-U.S. interests in the Middle East.

“He will be an effective representative of the State of Israel generally, and Prime Minister Netanyahu specifically, as we are in a crucial period of U.S.-Israel relations with the need to stop Iran from developing a nuclear weapon,” said William Daroff, who directs the Jewish Federations of North America’s Washington office.

Unprompted, Foxman, Harris and Daroff all made the same point: Dermer’s closeness to Netanyahu is what will make his time in Washington a success.

“The most important thing for any ambassador in Washington, especially any Israeli ambassador, is that he brings the full trust of the prime minister,” Harris said. “That’s an asset you cannot put a price on.

“What it says to the host country is that I am sending someone in whom I have full confidence, so when you talk to him you have a direct conduit to me.”

Ron Dermer, New Israel Envoy, Not Shy To Boast of Ties With Netanyahu