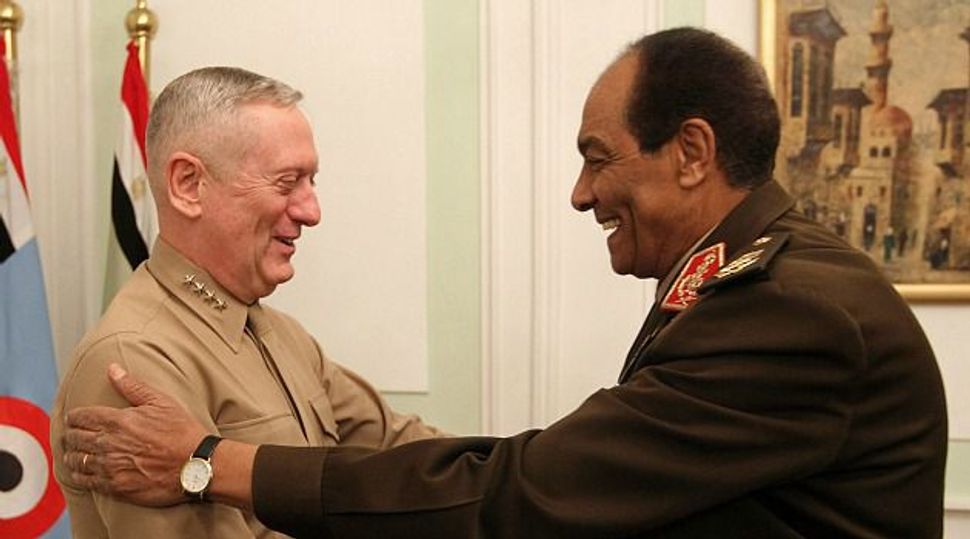 Gen. James Mattis greets Egyptian military leader Hussein Tantawi in 2011. After Mattis suggested that America?s friendship with Israel is a problem in the Middle East, some are questioning if top brass Image by getty images

The comment by the general who, until recently, ran America’s military command in the Middle East was startling in its bluntness.

“I paid a military-security price every day as the commander of CENTCOM because the Americans were seen as biased in support of Israel,” James Mattis told an elite audience at the Aspen Security Forum in Aspen, Colo., on May 20.

The comments by Mattis, who took off his uniform for good only this past May, were part of a one-hour interview in which Mattis was equally blunt about the crucial importance of Secretary of State John Kerry’s current effort to move forward the long-stalled Middle East peace process.

“The current situation is unsustainable,” he said. And chances of achieving a two-state solution “are starting to ebb because of [Israel’s West Bank Jewish] settlements and where they’re at.” If current trends continue, Mattis warned, Israel “ceases to be a Jewish state or you say the Arabs don’t get to vote — apartheid. That didn’t work too well the last time I saw that practiced in a country.”

Mattis is not the first general to voice concern about the impact of Israeli policies and U.S. support for Israel on American security interests. One retired top Israeli general went so far as to describe some of these commanders as “brainwashed” as a result of their having served in Arab countries. They come to believe that “Israel is the reason for hatred toward America in the Arab world,” said the former commander, who would speak only on condition of anonymity due to the sensitivity of Israei-U.S. military ties.

But several American defense experts argued that Mattis and several other generals who have voiced critical perspectives on Israel do not reflect any broad disaffection with the U.S.-Israel relationship among top American commanders.

“I don’t think this is a feeling among top brass,” retired Marine Gen. Anthony Zinni — himself a former CENTCOM commander — told the Forward in a July 26 interview.

Pro-Israel activists have, over many years, devoted the lion’s share of their efforts to the executive and legislative branches of America’s government. And those branches of government support Israel solidly on a bipartisan basis. But the country’s top military brass has always been harder to characterize.

On the one hand, military-to-military ties between the United States and Israel have long been extremely tight. Yet on the other, officers serving in the region have proved to be attentive to a worldview prevalent among Middle East leaders, one that points to Israel and its conflict with the Palestinians as a prime cause of instability in the region.

In 2010, one of Mattis’s predecessors in CENTCOM’s command, Gen. David Petraeus, shocked his Israeli friends when prepared testimony he was to give to the Senate leaked before he appeared. The prepared remarks, which were based on a study that his staff conducted of American security interests in the Middle East, stated: “The enduring hostilities between Israel and some of its neighbors present distinct challenges to our ability to advance our interests in the [region]…. The conflict foments anti-American sentiment, due to a perception of U.S. favoritism for Israel.”

Petraeus dialed back on his remarks somewhat when he actually gave his Senate testimony. Among other things, he clarified that he did not seek to put any blame on Israel. But he stood behind his observation that Israel’s conflicts with its neighbors “present distinct challenges to our ability to advance our interests in the area of responsibility.”

In 2008, the retired general James Jones also became a focus of concern for Israelis as he prepared to assume the post of national security adviser to President Obama. Jones, according to press reports, supported the deployment of an international force in the Israeli-occupied West Bank instead of the Israel Defense Forces. He also reportedly opposed Israel’s demand to retain extensive security control over the territories even after a Palestinian state is established.

Unlike Petraeus and Mattis, Jones never served as head of CENTCOM. During the George W. Bush administration, he was, in fact, appointed as a special envoy for Middle East security to work with both Israelis and Palestinians on security issues. Last year, Gen. Martin Dempsey, chairman of the Joint Chiefs of Staff, also warned sternly against a military strike against Iranian nuclear facilities, which Israel was widely reported to be considering.

Taken together, such comments have created an impression among some that views critical of Israel are common among the military’s top commanders. But according to Heather Hurlburt, executive director of National Security Network, a progressive-leaning think tank: “The comments of these officers [about Israel] are a bit misinterpreted. They were not making a comment on the conflict, they were describing the terrain features they encounter.”

Zinni, who took on a role as special envoy dealing with the Israeli-Palestinian conflict after leaving his CENTCOM command, rejected Mattis’s claim that Israeli policies are forcing American troops in the region to pay a price. “We sacrifice for allies,” he said, pointing to America’s military engagement in Europe during World War II and in support of South Korea. “That’s what we do for allies.” Zinni added: “I have never experienced anyone who made life more difficult for CENTCOM because of our relations with Israel.”

Military ties between the two nations run deep and include joint exercises, intelligence sharing and programs for Israeli officers attending military training schools in the United States. Zinni recalled that upon arriving in Israel he met with then Defense minister Shaul Mofaz, who years earlier had been his student at a Marines officers training course.

A source involved in military ties between the two nations also noted that American top officers are in favor of promoting cooperation with the IDF, because “Israel is an easy sell in the Pentagon,” where civilian leadership supports strengthening of the ties.

One reason that some commanders who deal with the Middle East come to view Israel’s impact on America’s security interests critically could be structural, some sources say. America’s Central Command includes the entire Middle East but excludes Israel, which was put under the responsibility of the European Command. Therefore, top CENTCOM commanders deal on a daily basis with Arab governments but do not have any interaction with Israeli counterparts or leaders. The recent decade’s wars in Iraq and Afghanistan have put even more officers in the region, creating, according to Hurlburt, “a generation of Americans who have experienced firsthand the dynamic that Mattis is talking about.”

Moving Israel to CENTCOM, an idea that had been discussed in the past, is viewed widely as risky, since it could undermine the trust between America and its Arab allies, who would hesitate before sharing information in forums that include Israel. Similar concerns have led America’s military to separate neighboring India and Pakistan into different commands, placing India in the Pacific Command and Pakistan in CENTCOM.

Reaching out to top generals and making the case for Israel among military leaders has traditionally been seen as a secondary priority for pro-Israel advocates in the United States. Most lobbying efforts and dollars are directed at elected officials and at holders of key positions in the executive branch, including the Pentagon’s civilian leadership.

Reaching out to officers has been left largely to one program operated by the Jewish Institute for National Security Affairs, a conservative-leaning organization focused on defense and military issues. For the past 31 years, JINSA’s program has taken a dozen retired generals and admirals to Israel annually to meet with Israeli officers and to view firsthand the country’s security needs and concerns. In addition, it organizes a yearly visit of cadets and midshipmen.

Mattis’s remarks, said Michael Makovsky, JINSA’s CEO, “raise the need of educating the generals that deal with all the Arab countries but don’t know Israel.” Makovsky, a former Pentagon civilian official, was recently chosen to head JINSA after several years in which the organization experienced instability and a bumpy leadership shift.

Now, Makovsky says, there is a need to expand the programs in order to expose more senior officers to the Israeli viewpoint. “The remarks of General Mattis betray a lack of historical understanding,” he argued. At the same time, Makovsky said he’d “love to take General Mattis to Israel and have him meet Israeli commanders.”

Despite the recent uproar created by Mattis’s remarks, top generals on both sides minimize their impact on the future of Israeli-American defense ties.

Zinni, when asked about the lasting impact of remarks such as those made by Mattis on American policy toward the Middle East, jokingly shrugged off the notion of any possible effect. “Trust me, there’s no impact,” he said.

Zinni ruefully recalled his own attempts to warn the Bush administration against going to war with Iraq. “Retired generals are invited to social events, but no one wants us to talk about policy,” he said.