How White House Push to Jews Spurred Shift on Syria 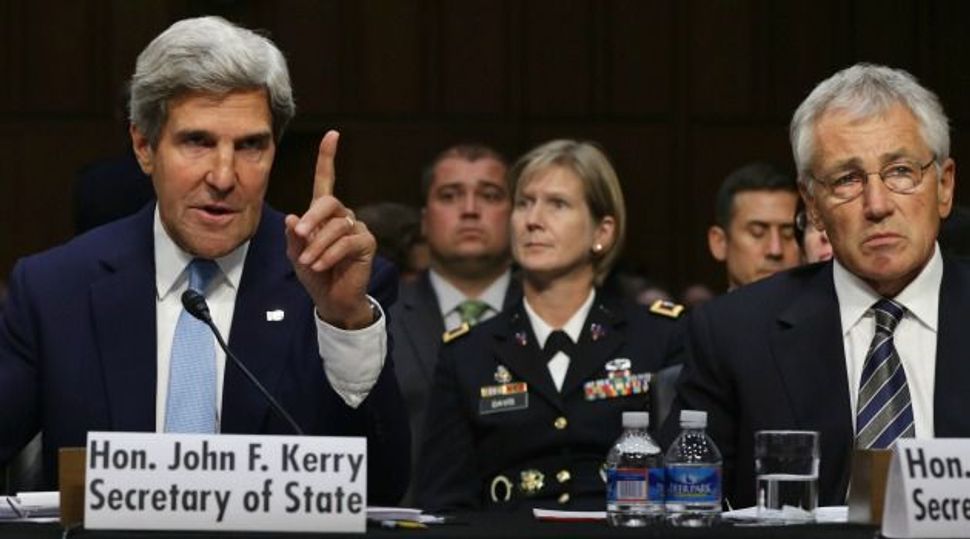 Push for Action: As Secretary of State John Kerry and Pentagon chief Chuck Hagel pushed Congress with a hawkish message on Syria, aides were calling pro-Israel groups to demand an open message of support. Image by getty images

The message from the two senior administration officials to Jewish leaders during a large conference call September 3 was clear: The Obama administration, said deputy national security advisors Ben Rhodes and Tony Blinken, believed that congressional approval of military action would send an important message to Iran, Israel’s most feared rival in the region.

“It is very important for us that we achieve a supportive vote in Congress,” said Blinken.

The two officials stopped short of directly calling on the Jewish community to put its weight behind President Obama’s request to authorize the use of military power against Bashar al-Assad’s regime in Syria. But the message was loud and clear, and at the call’s conclusion, Malcolm Hoenlein, executive vice president of the Conference of Presidents of Major American Jewish Organizations, promised his umbrella group would issue a supportive statement.

But he also cautioned the two advisors: “We don’t want to turn this into an Israel-centric issue.”

Hoenlein asked his fellow Jewish leaders, who had for the most part up to then avoided taking official stands, to back the administration’s congressional resolution authorizing military force in Syria in terms of American national security and not “to tie it to Israel.”

A statement put out by the American Israel Public Affairs Committee, the powerful pro-Israel lobby, shortly after made this point clear. “Simply put, barbarism on a mass scale must not be given a free pass,” the statement said.

The AIPAC statement emphasized that the lobby’s decision to support the resolution was based on the need to respond to the use of chemical weapons and on the importance of maintaining America’s credibility especially with Iran watching. Israel was not mentioned even once in AIPAC’s statement.

Other Jewish groups also quickly fell in line with the new consensus supporting an attack against Syria. The Anti Defamation League issued its own strong statement of support for Obama and urged Congress to “act swiftly” to approve the resolution. The Republican Jewish coalition, in a rare show of support for the president, issued a call to its members to reach out to their elected officials and “ask them to support the upcoming resolution.”

It was a long road for the pro-Israel community before it publicly came out in support of the attack. While expressing outrage over Assad’s use of chemical weapons, the Jewish community was initially reluctant to speak out in favor of an attack, fearing the move would play to the hands of those accusing the community of pushing America to war.

But several factors changed the calculus of Jewish leaders — most significantly the Obama administration’s emphasis on the importance an affirmative vote in Congress would have on Israel’s interests in the region and the White House’s implicit message that pro-Israel activists should take this point to heart.

Demonstrating the sensitivity of dealing with such requests was an article published on September 2 in the New York Times that quoted an unnamed administration source who seemed to be prodding AIPAC to weigh in and lobby for the resolution. The reference to AIPAC was later removed from the article with no explanation.

Requests from the White House for AIPAC to help with legislation on Capitol Hill are rare, but not unheard of, especially when this might give chary members of Congress the assurance they are not crossing the lobby’s will. In the 1980’s the administration asked AIPAC to lobby in favor of an arms deal with Morocco and for aid to the government of Lebanon. In both cases the lobby did just that, after making sure these requests did not interfere with Israel’s interests.

“These things happen,” said former AIPAC chief lobbyist Doug Bloomfield. “I used to get calls from people down town saying they need help to drum up a vote.” Bloomfield also noted that requests for help also came from members of Congress, when they felt they needed the pro-Israel community to speak up and make the case for an issue they intended to vote on.

“Based on past experience,” added Steve Rosen, another former top AIPAC official, “I can pretty confidently predict that the White House not only contacted AIPAC, but also gave them a very specific list of members that need to be approached.” Rosen said that while AIPAC was probably reluctant to take the lead on the issue, it had little choice.

“The simple reality is that a defeat for the president would be a defeat to everything the pro-Israel lobby believes in,” he said.

Another factor that helped AIPAC and Jewish groups come out in favor of Obama’s plan was its winning of bipartisan support. After meeting with Obama on September 2, Senate Republicans John McCain and Lindsey Graham made clear they backed the resolution and were willing to work for its passage. The next day the Republican House Speaker John Boehner plainly stated: “I’m going to support the president’s call for action.”

Majority leader Eric Cantor, the only Jewish Republican in Congress, also announced he would back the plan.

In a letter sent on September 3 to its supporters, AIPAC stressed the now-bipartisan nature of the request for authorization for use of force against Syria, telling its activists: “We need your help to persuade members of the Senate and House to join Speaker Boehner, House Majority Leader Cantor, House Democratic Leader Pelosi, House Democratic Whip Hoyer and many other in both chambers, in support of this bipartisan resolution.”

Maintaining bipartisan support has been AIPAC’s mode of operation for decades, although some critics have accused the lobby in recent years of veering closer to the Republican side. Still, it is not all that clear which side will require more persuasion from AIPAC on the issue of Syria.

There are currently two groups in Congress viewed as difficult to convince to vote for a military attack: The Tea Party Republicans who tend to oppose any increase in government action, even overseas, and the liberal wing of the Democratic Party, known to be averse to military intervention. AIPAC holds strong ties with both groups.

It has shown remarkable success in convincing fiscally conservative Republicans to support aid to Israel despite their political inclination to cut spending, and has also proved to be effective in working with all Democrats, including those closer to the left. In recent years, legislation regarding sanctions on Iran strongly supported by AIPAC but opposed by Obama won massive support from Democrats, despite the fact that a Democratic president was against them.

“Now the White House expects AIPAC to help him with the Democrats,” said Rosen, who believes that the lobby’s ability to deliver will be directed mainly at the Democratic side. But a former Obama administration official argued that it is the Republicans who will have more to gain from the pro-Israel lobby’s decision to step in, since it can provide Boehner and Cantor with the political backing they need in the face of congressional Tea Party resistance.

Meanwhile, J Street, the dovish lobby often at odds with AIPAC, has yet to weigh in on the debate. A spokeswoman for the organization said that J Street has not taken a position on the president’s request for authorization of military power. In a statement issued on August 29, J Street said that Syria must be held accountable, but called on President Obama and world leaders to make sure that “any action taken should aim to minimize the loss of civilian life, deter the further use of chemical weapons and avoid regional spillover.”

How White House Push to Jews Spurred Shift on Syria