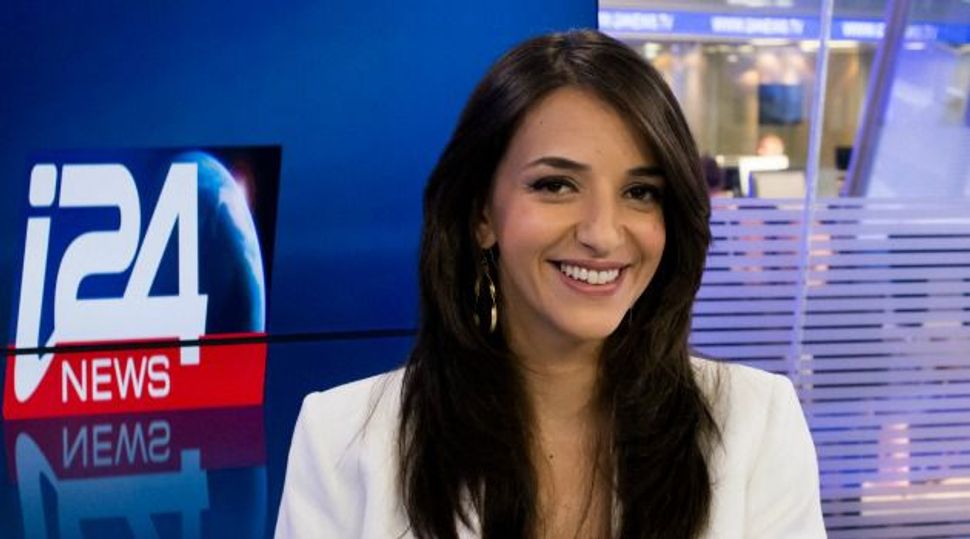 The brand new studios housing Israel’s only 24-hour news channel have an amazing view of the Jaffa port, but the channel owner’s decision to broadcast from a city shared by Jews and Arabs is about symbolism, not scenery.

The founders of i24 News, which launched in late July, say they mean to provide a broad and diverse Israeli perspective on regional and international news that will represent more than just the Jewish majority to an international audience. This is why i24News airs simultaneously in English, French and Arabic — no Hebrew. Its target audience is not Israeli.

The channel is the brainchild of former French diplomat Frank Melloul, who, as media advisor to former Prime Minister Dominique de Villepin, served as head of France 24, the country’s international news channel — a similar project to the one he has recently launched. Like France 24, i24news’ target audience is international, not local, with roughly 70% percent of coverage dedicated to international news and 30% to Middle East coverage.

He added: “I’m sharing this channel [as] diplomacy. I want to target people who hate Israel because they don’t know anything about [the country].”

To do so, Melloul has hired over 150 journalists — mostly bilingual and hailing from all over the world — including at least eight who made the jump from the United States, and 25 correspondents stationed globally. Adar Primor, now editor-in-chief of i24News Internet and multimedia, left a long career as a print journalist for Haaretz to join Melloul’s team.

For Primor, i24News is filling a gap in coverage often ignored by other media outlets covering the Middle East. “Israel is not only war, not only disputed territory,” he said. “The idea was to show a different Israel, the complexity of Israel.”

The network is available by satellite in Europe, Africa and Asia, and via a live stream hosted on its website. Plans are in the works for a U.S. launch sometime in 2014.

The broadcaster’s launch last month was touted throughout the American media as an Israeli response to Al Jazeera — the Qatari state-sponsored broadcaster whose name has become almost synonymous with Middle East coverage — which announced in January that it would expand its operations in the United States with Al Jazeera America.

Melloul, for one, rejects that comparison. “First, because we don’t share the same values,” he said. “I think that it is important to have a different voice in the Middle East, especially from a democracy.”

Melloul is also quick to stress that unlike Al Jazeera, which is funded by the Qatari monarchy, i24 is an independent entity, privately backed by Jewish Franco-Israeli businessman and telecommunications mogul Patrick Drahi. The two met roughly eight months ago, he said, when Drahi asked Melloul to spearhead a project similar to what he had accomplished with France 24 — creating a space for the Israeli perspective in international news. The difference, he noted, was that it would not be state-backed.

“It’s a private channel first,” Melloul explained. “Most of the international news channel[s], the owner is the government. I don’t receive any money from the Israeli government [or] any political party.”

Still, though Al Jazeera carries little, if any, criticism of the Qatari monarchy that sponsors it, its Arabic language channel is known for scathing, uncensored coverage of other governments throughout the Arab world — coverage that is widely credited with having broken the information monopoly many of those governments exercised over their domestic airwaves. Among other things, Al Jazeera’s continuous live coverage of the 2011 Tahrir Square protests in Egypt, and the efforts of the government of President Hosni Mubarak to squelch them, is credited with having rallied many Egyptians to support the protestors.

In the 2004 documentary about Al Jazeera, “Control Room,” Samir Khader, the channel’s senior producer and later chief editor, claimed explicitly that one of the network’s purposes was to shake up the rigid infrastructure of Arab society, which he believed had fallen behind because of social intolerance to other cultures and perspectives.

Will i24 countenance comparably critical coverage of Israel?

“There’s no question of censorship of any kind,” said Primor. “Arabs and Jews and foreigners write for the same site what they think of [a given] situation. This is important and that’s what was promised to me from the start.”

A look at the channel’s website shows a fairly wide range of opinion, though nothing outright anti-Zionist or in favor of moves such as boycotting Israel or Israeli products from Jewish settlements in the occupied West Bank: op-eds by Colette Avital, a dovish politician of the opposition Labor Party, and by Lily Galili stand alongside one by vocal West Bank settler Karni Eldad and a piece criticizing government policy concerning the Bedouin and Palestinian presence in the Negev by Anas AbuDaabes.

But perhaps the best example of i24’s effort to emphasize Israel’s diversity is 32-year-old Lucy Aharish, a fluent Hebrew speaker and Israel’s first prime-time Arab-Israeli news anchor, who hosts the English-language news program. Originally considered for the Arab-language broadcast, Aharish insisted on auditioning in English, reluctant to be pigeonholed within the organization because of her origins.

It’s still early to talk about any hard numbers in terms of satellite audience. But according to Melloul, critics skeptical of whether citizens of Arab countries will tune in to an Israeli channel may be disappointed. “Through the website, I can tell you that we are watched in Saudi Arabia, Iraq, Egypt, Jordan and Algeria,” he said.

One month in, he added, roughly 20% of the channel’s web-based live stream audience is from the U.S.

Among media experts, the verdict is still out on what this Israeli player will mean for coverage of the Middle East, and more importantly, whether there is an appetite in the American market for additional international coverage.

Josh Friedman, a Pulitzer Prize-winning journalist and former director of the international program at the Columbia University Graduate School of Journalism, said that the people inherently interested in the Israeli station could ensure i24 a reliable viewership.

“You don’t need that many,” he said. “TV is becoming like FM rather than AM. You just need a niche market, and there are people who are concerned with the Middle East: Jews, Arabs and Christian Evangelists.”

But Arch Puddington, vice president of research at Freedom House, said that what attracts viewers to Al Jazeera is its ability to provide “information and images that I’m not going to get anywhere else.”

Similarly, he said, i24 should make use of Israel’s diverse array of experts and commentators “to provide the listeners with opinions that they’re not going to get on other stations.”

Alex Safian, associate director of the Committee for Accuracy in Middle East Reporting in America, a pro-Israel advocacy group, said that in-depth analysis of international affairs could win i24 another prize, one beyond audience size: “They can influence the influentials here,” he said.

Nonetheless, Puddington stressed that compelling content can only get a station so far. i24’s first challenge will be financial. “I think you really have to have some deep pockets in order to compete with other stations,” he said. Indeed, he added, one of Al-Jazeera’s primary advantages is the Qatar monarchy’s almost limitless resources, both for the financial depth this provides and the ample staff it can buy.

The second challenge, Puddington noted, will be one of perspective. “I think it’s going to be a challenge for an Israeli station,” he said. “There’s just this notion out there that the Israelis have their own axes to grind and people will regard an Israeli global station with initial skepticism.”

“But there is a place, I think, for [i24],” he added. “I think there’s a need for a better coverage of the Middle East than what Al Jazeera and the U.S. stations provide. If i24 can broadcast in a way that will capture my interest and the interest of people like me, then I think the answer is yes, [it can work]. I’m not committed to Al-Jazeera.”