Kotel Conflict Grounded in Modern Issues, But Roots Go Back Thousands of Years 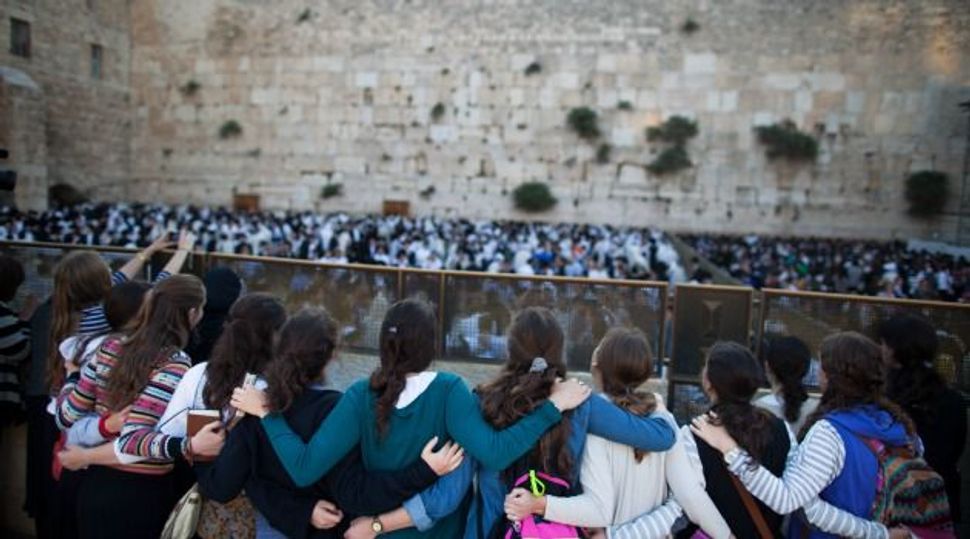 JERUSALEM (JTA) — The scene is familiar to us all. Women of the Wall come to the Kotel to worship in the shadow of the Temple Mount. Haredi Orthodox worshippers respond by disrupting their prayers, sometimes pelting them with eggs and other objects.

Underlying these clashes are distinctly modern issues – the conflict between liberal and traditionalist Jewish movements and the proper place of religion in the Jewish state, among others. But the controversy surrounding women’s prayer at the Western Wall hearkens back to events that occurred but a few yards away some two millennia ago.

The Mishnah (Sukkah 4:9) relates: “On a certain occasion, [a certain priest] poured out the water over his feet and all the people pelted him with their etrogs.”

The traditional interpretation of this passage explains that the priest in question was a heretic who rejected the Oral Law. As such, he was opposed to the ritual of the water libation, which has no source in the written Torah. Spilling water on his feet was an act of contempt for the received Jewish practice, and the people, incited by what they saw as a sacrilegious act, assaulted him with their etrogs, the citrus fruit used on the festival of Sukkot.

Understood this way, one might describe the Mishnah’s brief account as the “ultra-Orthodox” perspective. In this view, the priest not only rejected but mocked the divine command, and the people’s actions were not just understandable but perhaps even warranted.

But there’s another version of this story. The Talmud (Sukkah 48b) includes a description of the aftermath of the etrog uprising: “The horn of the altar became damaged and the Temple service was halted until they brought a chunk of salt and put it there, so that the altar would not appear damaged. For an altar which lacks a horn or a base is invalid.”

In their righteous rage, the people ended up damaging the sacred altar, leading to a temporary cessation of Temple rites. Attending priests quickly repaired the damage and restored the Temple service, but the scars remained visible to all: Crude pieces of salt replaced the regular polished stone of the altar.

In the Talmud’s account, the priest is still a heretic who has committed a grievous sin. But this version is more nuanced than the Mishna. It shows us that the people’s assault on the priest, even if justified, came at a high price. Indeed, they too violated the sanctity of the Temple, perhaps even more than the priest.

Though the rabbinic texts portray the priest negatively, the priest himself certainly did not see himself as a heretic. The contemporary scholar Jeffrey Rubenstein has attempted to reconstruct the priest’s perspective on these events. He suggests that in spilling the water at his feet, the priest did not intend to mock the traditional Temple service. Rather, according to the teachings he had received, spilling the water was the correct way to perform the ritual.

In this reading, the etrog throwers were seeking to impose their interpretation of Jewish tradition on the priest and delegitimize any other understanding of the proper way to conduct the service. The priest can now be viewed as a victim, if not a hero, and the people as the villains.

Finally, Flavius Josephus, the first-century Jewish historian, records a very different account of what is apparently the same incident. In his “Jewish Antiquities,” he relates that the priest was none other than King Alexander Jannueus, of the Hasmonean dynasty. In this version, the etrog riot was not a result of a theological dispute. Rather, it was a political protest expressing the people’s rejection of Alexander as their leader. This suggests a far more cynical understanding of events: The Temple is not a closed sacred space but a stage on which larger political conflicts are played out.

How little has changed. The holiness of the Temple Mount and its environs continues to generate conflict and violence as well as inspiration and unity. Like the great etrog riot of ancient times, the story of Women of the Wall has been told from many perspectives. Some vindicate the haredi Orthodox and vilify the women, others do the opposite. Some see both sides as behaving disreputably, or see the whole matter as a political conflict masquerading as a religious dispute.

Whatever the case, the similarities between these two conflicts, ancient and modern, should serve as a warning to us all. The rabbis teach that violent incidents at the Temple ultimately led to its destruction. In our own day, it is important to remember that no single story captures the full complexity of real-life events and that even the stories told by those whose practices and beliefs we reject can be as coherent and compelling as our own.

Such awareness will not resolve these controversies, but they may help prevent them from consuming us.

Moshe Simon-Shoshan teaches Judaic Studies at the Rothberg International School at The Hebrew University and is the author of “Stories of The Law: Narrative Discourse and the Construction of Authority in the Mishnah” (Oxford, 2012).

Kotel Conflict Grounded in Modern Issues, But Roots Go Back Thousands of Years