Israel Pushes for Boost in U.S. Aid to More Than $3B a Year 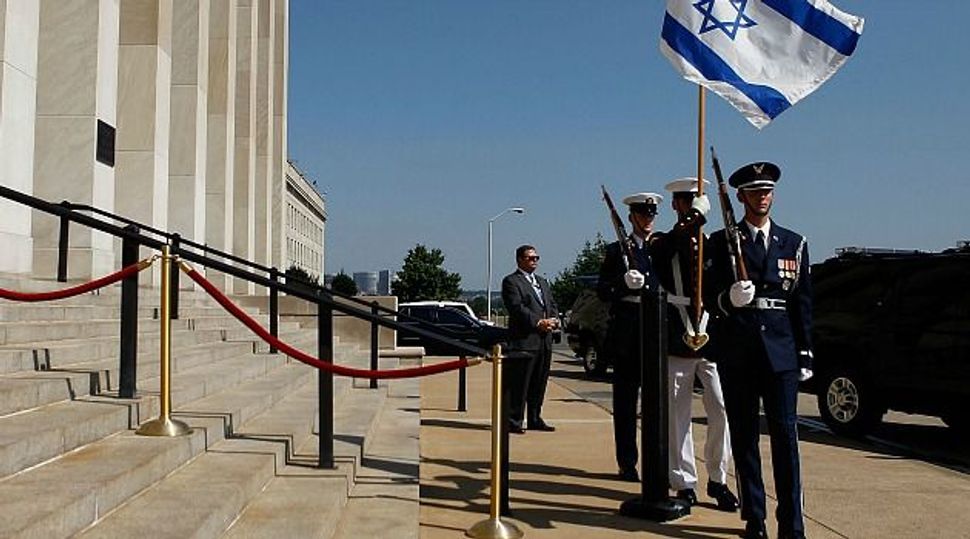 Upping the Ante: The U.S. provides a river of aid to Israel, as reflected by the honor guard welcomed at the Pentagon. Israel is pushing for an even larger package of future assistance. Image by getty images

Israel’s 10-year assistance agreement with the United States doesn’t expire until 2017. But in Washington time, that’s not too far away for Israel to argue now for increasing aid levels when the agreement is renewed.

Citing the ongoing instability in the Middle East, Israel is already pushing for an increase in U.S. military aid to address new challenges and to ensure Israeli military superiority in the region.

More specifically, in renewal talks that are ongoing between the two countries, Israel is pointing to, among other things, recent sales of advanced American weaponry to Saudi Arabia and the United Arab Emirates. Under a doctrine stemming from statutory language in earlier legislation, the United States, Israeli officials point out, is committed by law to ensuring that Israel maintains a “qualitative military edge,” — known more commonly as QME — over any of its Arab neighbors.

The 2008 law, seen as mainly declarative at the time, could provide the legal basis for increasing aid to Israel in order to ensure its military edge.

“Naturally we are talking about our needs, and as we get closer to 2017 we will discuss the details of what the next package will include and under what conditions,” an Israeli official briefed on the discussions said. Still, opposition to an increase exists, and it comes, in some cases, from some surprising places.

“There’s a diminished threat from the Syrian army and no increase in the power of the Egyptian army,” noted Elliott Abrams, deputy national security adviser in the Bush administration. Abrams, who is generally regarded as hawkish, said that, for now, Syria and Egypt are preoccupied with war on, or repression of, their own rebellious citizens and thus pose less risk to Israel, with consequent implications for Israel’s military aid requirements. He noted also that Egypt’s military is not expected to receive any boost in its current level of American aid.

As for the recent American arms sales to Saudi Arabia and the UAE., Dov Zakheim, a former top Pentagon official who sat in on many discussions about military aid to Israel, said, “If you look at the issues, Israel and the Gulf states are on the same page.”

He noted that Saudi Arabia, the smaller Gulf countries and Israel share the same concerns regarding Iran’s nuclear program and the spread of extremist Islamic forces. “So as long as the Gulf countries become more sophisticated in protecting their territories, this will cause more difficulties to Iran, and that’s a good thing,” Zakheim said.

An August 15 article published in Defense News first reported that Israel is seeking an increase in the foreign aid, which reached $30 billion in the decade-long agreement signed in 2007. Israeli officials confirmed to the Forward that informal talks are already taking place, but they said intense detailed discussions are not planned for the near future.

Much has changed since the last military aid deal was signed, in 2007. Israel’s neighborhood has become even more volatile, as the Arab Spring toppled or threatened long-standing authoritarian regimes. This has deprived Israel of a certain regional predictability it enjoyed, even with regimes with which it remained in a state of war.

Meanwhile, the U.S. economy is still struggling to recover from its worst slump since the Great Depression, forcing the federal government to cut back on all government expenses, and raising new doubts about the affordability of a robust foreign aid program.

While other nations struggle to receive American taxpayer dollars, Israel rarely faces resistance. Strong support in the administration and Congress, coupled with favorable public opinion and a strong lobby advocating for the cause, has made sustaining and increasing military aid to Israel an easy sell. This time around should be no different, officials and experts knowledgeable about the process say, despite the changed environment.

“It is not a matter of arm-twisting,” Zakheim said. “There is a long-standing commitment to Israel’s qualitative military edge that has been accepted by the United States for good reasons.”

In preliminary talks, Israel began to lay out the principles it would like to see guide the next aid package. One will aim to put a dollar sum on the cost of maintaining Israel’s QME. This estimate will take into account what it will take to ensure that Israel’s armed forces are always one step ahead of their adversaries — or those Israel argues are adversaries — in the region. The second will be to include missile defense programs, currently funded through a separate Pentagon budget line, in the foreign aid program managed through the State Department’s budget.

“We’re looking at a holistic Middle Eastern picture, which includes growth of missile arsenals in Lebanon and Gaza; the strategic situation in Sinai; the Syrian situation as it impacts us and other countries, including Jordan,” Israel’s ambassador to Washington, Michael Oren, told Defense News. “Therefore, we will be looking for a long-term [memorandum of understanding] that will address all of the issues that are routinely raised in our very close and high-level consultations with our American counterparts.”

American and Israeli officials who were involved in past aid negotiations described a process driven by needs, not by the total dollar amount of the aid package. It begins with Israelis presenting the threats they believe they’ll face in the coming decades and the weapons systems they’ll need to address these threats.

Before the last Memorandum of Understanding was signed in 2007, the deal was first finalized between President George W. Bush and Israeli Prime Minister Ehud Olmert and only then handed down to the lower levels where the details were worked out.

The American Israel Public Affairs Committee, the mainstream pro-Israel lobby, is deeply involved in the process, mainly in convincing Congress, once the administration makes a decision on the aid levels, to approve the assistance year after year and to make adjustments throughout the 10-year period if needed. “There’s a pretty good system in place,” said a former pro-Israel activist who was involved in those discussions. “AIPAC people know all the details and make sure the best package for Israel is approved regardless of who controls the committees.”

As discussions begin on the next assistance deal, Israel is looking for America’s help with a different set of concerns. Iran’s nuclear program remains the main issue for Israel, which is seeking advanced American weapons systems to deter Iran and possibly to take action against it. But according to an Israeli official, who spoke on condition of anonymity, short-range rocket threats from Hamas and Hezbollah now make up a bigger part of Israel’s plea, given the experience of recent years and the need to bolster missile defense systems.

New elements have also been brought into the calculation. These include Israel’s fear of instability in Egypt, where the military recently ousted a democratically elected Islamist government. Though the new government is actually friendlier to Israel than the ousted one was, the shakeup has stoked Israeli fears of an eventual full or partial revocation of the 1979 Camp David peace treaty between the Egypt and Israel. Jerusalem is also concerned about diminishing security along Egypt’s Sinai border with Israel, as the turmoil in Cairo has given terrorists in that area freer rein.

Israel also worries that Syria’s civil war may spill over; or that the country could break up, with nonconventional weapons falling into the hands of Islamist extremists using the country as an operating base; or that Jordan, Israel’s most trusted neighbor, which has kept the eastern boarder quiet for decades, could also see upheaval due to internal unrest and a huge influx of Syrian refugees.

The financial downturn that has plagued the United States since 2007 could change the backdrop of the upcoming aid talks, although assistance to Israel enjoys widespread support within the American public and in Congress.

After many deliberations in Jerusalem and Washington, Israel and its supporters decided not to seek an exemption from the across-the-board budget cuts known as sequestration. Israel agreed to take a cut of more than $150 million to its annual aid rather than be seen as seeking special treatment at a time when the American people are suffering the consequences of sequestration.

Asking for an increase in aid at a time when America is still struggling could come across as insensitive, but the Israeli official said this was not the impression Israel has gotten from its American counterparts.

Abrams, on the other hand, proposed in an interview with the Forward a dramatic change to the pattern of military relations between Israel and the United States: Doing away with U.S. aid to Israel altogether. “You can’t have Israel becoming richer and richer and then coming to America to ask for foreign aid,” Abrams said, pointing to Israel’s recent natural gas finds that are expected to create a huge cash surplus for the Jewish state in coming years.

Abrams argued that Israel can pay for the weapon systems it buys from the United States, just as Saudi Arabia does, and that military to military ties can remain strong, even without a foreign aid component. “I think it would be advantageous to the relations,” he said. [Any discussion about cutting the aid should be done privately, he added; otherwise, anyone proposing it would be accused by political rivals of not standing behind Israel.

“Israel’s popularity in the United States is tremendous,” he said, “and it might grow even more if foreign aid is taken out of the discussion.”

Israel Pushes for Boost in U.S. Aid to More Than $3B a Year