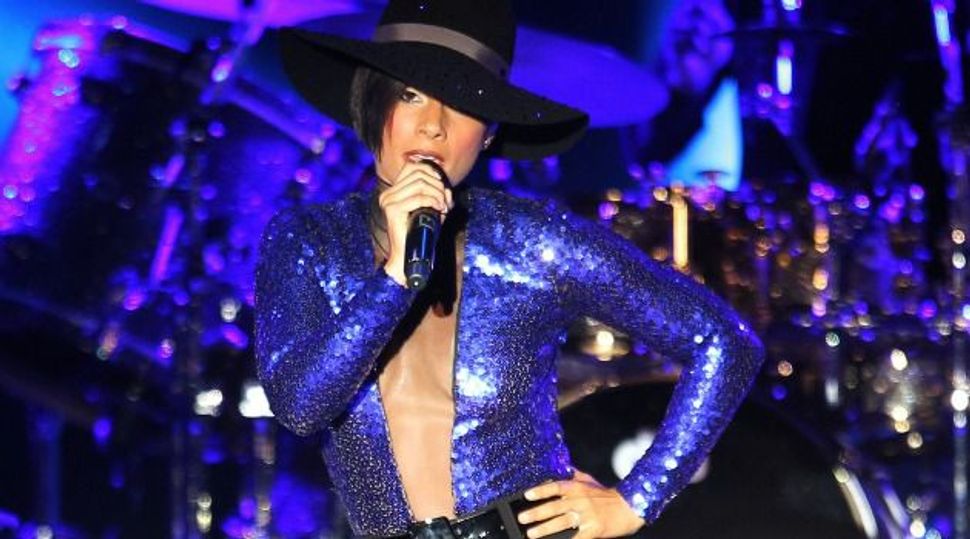 The Keys To Boycotting a Boycott: Alicia Keys played Tel Aviv on the 4th of July Image by Getty Images

For activists on both sides of the battle over boycotting Israel, there’s no business quite like show business.

The Boycott, Divestment and Sanctions movement, which aims to isolate Israel because of its occupation of the West Bank, has often had trouble gaining traction on other fronts. But the performing arts have emerged as the one field in which calls to boycott the Jewish state have yielded some response. Roger Waters, Elvis Costello, Annie Lennox and Stevie Wonder, among others, have responded to calls from grassroots activists by canceling dates in Israel or declining to play there, or at Israel-related events, even as other performers, including Lady Gaga, Alicia Keys, Bob Dylan and Madonna, have pointedly ignored such calls.

But lately, a group opposed to BDS has been taking a notably different approach. Unlike its opponents, who focus on building grassroots pressure by fans, from the bottom up, the Creative Community for Peace has assembled an impressive roster of top entertainment executives supportive of Israel who are seeking to influence artists from the top down to perform there.

“Because our members work within the industry, we are able to use our personal contacts to proactively reach out to artists and their representatives to provide balanced information about Israel,” said Lana Melman, CCFP’s director. “We prepare them for the possibility of a boycott campaign, educate them about Israel and the artistic freedom there, and work to arrest potential cancellations.”

CCFP, which formed in 2011, does not yet have its status as a tax-exempt charity recognized by the Internal Revenue Service. But while awaiting the processing of its application, it has partnered with StandWithUs, a group widely perceived as being on the far right of the pro-Israel spectrum. Pending acceptance of CCFP’s application, donors to the organization send their contributions to StandWithUs, an already recognized public charity. StandWithUs channels these donations to the newer group. This enables CCFP supporters to claim their donations as tax deductions. CCFP also currently shares office space with StandWithUs.

These are legal and commonly used practices for new groups in the not-for-profit world, according to tax experts. But CCFP’s choice to partner with StandWithUs — a group that has co-produced videos with Israel’s foreign minister, Danny Ayalon, rejecting the notion that the West Bank is occupied — has moved critics to question its real agenda.

“Why not align themselves with an organization that is closer to their projected position as apolitical?” asked Andrew Kadi of the pro-boycott U.S. Campaign to End Israeli Occupation.

CCFP’s founding member David Renzer, in an email to the Forward, said his organization has “always operated independently” of StandWithUs and that “there is no day-to-day relationship” with the group.”

The criticism has not stopped CCFP from bringing together an impressive roster of Hollywood heavies behind its banner. They include, among others, Ben Silverman, a former co-chair of NBC Entertainment; Jody Gerson, co-president of Sony/ATV Music Publishing; Gary Ginsberg, executive vice president of Time Warner; Samuel Schwartz, co-founder of the music talent agency Gorfaine/Schwartz, and Ron Fair, chief creative officer and executive vice president of Virgin Records and former chairman of Gefen Productions. Fair has also produced albums for acts such as the Black Eyed Peas and Christina Aguilera, and these high profile connections underline the kind of personal and professional relationships the group can bring into play.

The latest show business clash over Israel involved Grammy award winner Keys, who performed in Tel Aviv on July 4 despite a massive mobilization of critics that organized a petition signed by 16,000 people, calling on Keys not to “play apartheid Israel.” The protest was joined by Pink Floyd musician Waters and by author Alice Walker, who wrote a series of personal open letters to Keys appealing to her to boycott Israel.

In response, the music industry executives on CCFP’s advisory board contested Walker’s comparison of Israel to apartheid-era South Africa. The group also organized a counter petition in which more than 18,000 signatories called on all artists to proceed with their plans to perform in Israel and to allow “the power of your music to help bring hope and peace to the region.”

At the end of the day, it was the pro-Israel activists who won this battle when Keys went ahead with her July 4 performance.

The group’s website offers a view of Israel aimed at pop artists and their followers, showcasing Israel’s cultural diversity and technology. But it touches only briefly on issues relating to Israel’s conflict with the Palestinians, the topic at the core of the boycott campaign.

The website describes CCFP as a group composed of members with diverse political views about how Israel can attain peace. But it also takes positions that appear to be held by only a narrow spectrum among Jews who support Israel. Among other things, it argues against the notion that settlements are an obstacle to peace with the Palestinians though Secretary of State John Kerry recently stated that “the United States of America views all the settlements as illegitimate.” A recent survey of American Jews by the Pew Research Center found only 17% of American Jews believe that settlements help Israel’s security.

As does StandWithUs, CCFP also disputes the use of the term “occupation” — a description that even right-wing Israeli leaders such as Ariel Sharon have acknowledged as accurate — to describe Israel’s hold over the West Bank.

The group’s success is hard to measure. Its website is packed with photos of internationally acclaimed artists performing in Israel and posing on the streets of Tel Aviv or at the Western Wall in Jerusalem. It also boasts testimonials and videos of artists that have visited Israel, from Dylan to Justin Bieber.

Still, it is not clear how many artists have been swayed by CCFP’s pro-Israel campaign, or what role CCFP or other activists played in ensuring that artists include Israel in their world tours.

David Siegel, Israel’s consul general in Los Angeles, has no doubts. “They are effective because they work from inside the industry,” he said. “They have gained a lot of resonance, and they are, essentially, the only organization focused on the cultural boycott.”

In terms of assets inside the entertainment community, groups on the other side of the battle can mainly deploy Waters, the former frontman for Pink Floyd. Waters not only supports the boycott, but has also taken it upon himself to reach out to fellow performing artists to convince them to scratch their Israel concert plans.

Last December, it was Waters who wrote to Wonder, calling on him to reconsider his performance at an event hosted by Friends of the Israel Defense Forces, in Los Angeles. Wonder canceled the planned gig. BDS supporters also took pride in convincing Costello to call off his performance in Tel Aviv.

But while the public battle has focused on artists already scheduled to perform in Israel, a music industry insider who has been involved in bringing top-of-the-line artists to Israel noted that the greater concern rests with those who have not yet scheduled their concert tours.

“It is difficult to bring artists to Israel as it is,” the industry executive said, noting the relatively small market Israel represents. “But politics makes it even more complicated. These people don’t like to get involved in it.”

Siegel, Israel’s top diplomat involved in reaching out to the entertainment industry, underscored this point. “We’re talking about artists that are used to having everyone love them, and now they are getting hate mail and petitions,” he said. “That’s why the best way to talk with them is from within the industry.”