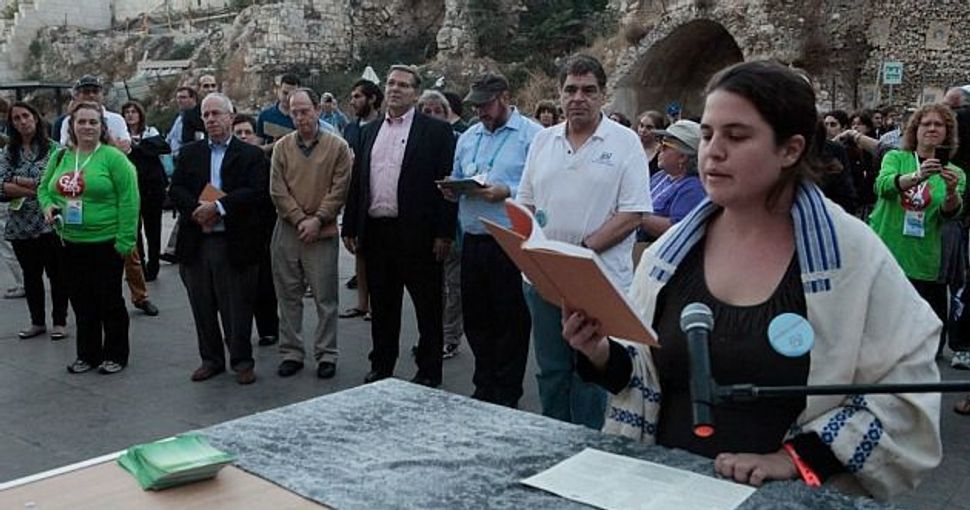 The Jewish Federations of North America capped their convention in Israel with a march to the Western Wall. Their prayer at the egalitarian prayer section of Robinson?s Arch was symbolic of their push to ease Orthodox control of religious affairs. Image by jfna

Defying predictions, America’s Jewish federations mustered to mount an unabashed show of strength when they gathered in Jerusalem November 10 for the annual General Assembly of the Jewish Federations of North America (JFNA). It wasn’t exactly the sort of defiance their Israeli hosts were accustomed to seeing at an American Jewish philanthropists’ convention.

Prime Minister Benjamin Netanyahu opened the three-day meeting with fiery call to arms against Iran. His defense minister, Moshe Yaalon, delivered the same stern message the next day. Such Israeli battle cries are usually the cue for American Jewish activists to line up for duty.

But Iran was not the enemy the delegates had come to Israel to confront. Their main targets were closer at hand. Target No. 1 was Israel’s system of strict Orthodox control over Jewish religious affairs, which offends many liberal Jews who are the charities’ main support base. No. 2 was the waning Jewish loyalty of their own children, the next generation of American Jews. These threats aren’t physical, but they’re seen nonetheless as mortal threats to American Judaism.

Open controversy is something North America’s 153 local Jewish charity federations have strictly avoided since their emergence a century ago, mostly for fear of alienating donors. Their traditional attitude was captured in the iconic slogan of their erstwhile national fundraising arm, the United Jewish Appeal: “We are one.”

The new tone was evident in the assembly’s opening moments, shortly before Netanyahu’s speech. In brief comments welcoming the delegates, the American co-chairs of the assembly, Washington, D.C., federation leaders Michael and Susie Gelman, said that they “look forward to the day when Israel will realize the dream of being a Jewish, democratic and pluralistic state.” Susie Gelman delivered her remarks in fluent Hebrew, which was then translated into English by her husband.

In speaking of pluralism, code among Jewish activists for diversity of religious denominations, the Gelmans were issuing a challenge to the Israeli system. That challenge would be the topic of the assembly’s two most heated sessions, one on Orthodox rabbinic control of marriage in Israel, the other on women’s prayer at the Western Wall. Both sessions generated spirited, at times angry discussion that spilled out into the hallways for hours.

“We got a real debate going about a serious issue,” JFNA president Jerry Silverman told the Forward. “And that’s what we intended to do.”

But the Gelmans made another opening-night pledge that went unfulfilled. “In the coming days,” they said in their Hebrew-English tag-team delivery, “you will have the opportunity to confront the most important issues facing the Jewish state and the Jewish people.”

That didn’t happen. One of the most important issues facing Israel and world Jewry was strikingly absent from the program: the Israeli-Palestinian conflict and peace process. Silverman had told reporters in October interview that the conflict wouldn’t be on the agenda, arguing that since the federations and the Israeli prime minister agree on a two-state solution, there’s nothing to discuss.

In fact, this is one of the most fraught and divisive issues on the agenda of organized American Jewry. Beyond substantive questions like settlements and Jerusalem, Diaspora Jewish federations are constantly forced to reexamine the limits of permissible debate within their own walls. The debate over debate is bitter, nationwide and relentless. Jerusalem might have been just the place to discuss it, with the federation movement’s top leadership present and Israel’s leading diplomatic and military minds available.

But it was left out. The closest the assembly came to the topic was a series of how-to sessions on best techniques for defending Israel’s image.

Another challenge was sounded immediately after the Gelmans by the assembly’s Israeli co-chair, entrepreneur and social activist Ronny Douek. Referring to Israel’s massive anti-government economic protests two years ago, he said: “The social protests of 2011 and the results of the last election demonstrate that the Israeli public demands a new social and economic agenda.” He invited delegates to address it.

But the debate over that new agenda—over questions of economic and welfare policy, as crucial to the federations’ work as any topic imaginable—never happened. Like the peace process, economics and poverty were discussed only in how-to sessions on techniques for coping with the current dismal reality. The tax, regulatory and welfare policies that underlie Israel’s dilemmas—and America’s—were off the table.

Blandness and conflict avoidance are often blamed for a much-discussed malaise plaguing the federation system. The malaise is starkly visible in the network’s central mission, raising funds to support the many educational, cultural and social-welfare institutions under the federated umbrella. The annual fundraising campaign had close to 900,000 individual donors nationwide at its peak in the late 1980s. Today it has half that number, some 450,000.

Revenues are declining, too. The annual campaign peaked in 1974, following the Yom Kippur War, at $683 million. That’s equivalent to about $3 billion in today’s dollars. The next year, with the war crisis over, it dropped to $465 million, equivalent to about $2 billion today. From there it rose steadily, but more slowly than inflation. This year’s total will be around $900 million. Even ignoring the 1974 postwar emergency, that’s a drop of more than half in real dollars in four decades, despite an explosion in individual Jewish wealth.

With its donor base aging and fewer young Jews coming forward, federations have made up the difference by building massive endowment funds. They currently hold some $14 billion in assets, yielding about $1.4 billion yearly in interest income for programs in addition to the $900 million in donations.

On top of their other troubles, the federations face a decline in the appeal of Israel. Israel was for decades the federations’ calling card and received between half and two-thirds of their combined revenues.

Today Israel is a first-world country, less desperate for aid than it once was. Its share of federation campaigns is down below one-fourth. Moreover, debates over its policies make it as often a divider as a uniter. Paradoxically, while the federations’ task in supporting in domestic welfare and Jewish education is more critical than ever, but they lack the simple mobilizing message they once had.

The General Assembly, begun in 1933, was for decades the most visible institution in the national federation system. It attracted thousands annually, including federation staffers, donors, politicians on the make and an endless parade of independent activists looking to influence community policy or grab a share of the income.

Beginning in the early 1990s, as part of a strategy to reenergize the system, the central body—then known as the Council of Jewish Federations—decided to reclaim ownership of the event by barring outsiders. The plan backfired. Instead of reenergizing the assembly, it turned it into a professional seminar.

This year’s assembly represented an attempt to recapture some of the old spirit. It faced a huge challenge, beginning with low attendance. Registration, traditionally above 3,000, was below 1,000 just weeks before the opening. In the end only 1,500 delegates came from America and Canada. In the final days JFNA scrambled to fill the seats with Israelis, offering registration fees as low as $15.

It worked. About 1,500 Israelis joined the 1,500 North Americans, bringing the total to a respectable 3,000. No less important, the scramble brought in new Israeli faces unlike the government and Jewish Agency officials who traditionally attended the assembly. Many were small-scale, innovative social entrepreneurs of the sort who used to show up at assemblies in America and liven the discussions—social protesters, community organizers, experimental Jewish educators, settlers, peace activists.

Somehow, the combination clicked. The participation of the newcomers, combined with the energy generated by the few genuine debates, created an atmosphere of excitement and determination that hadn’t been seen at a General Assembly in years.

“What happens here is important,” said British-born kibbutznik Gary Levy, 39, who runs an educational program in the rural Galilee. “We will be a light unto the nations only when we’re a light unto ourselves.”