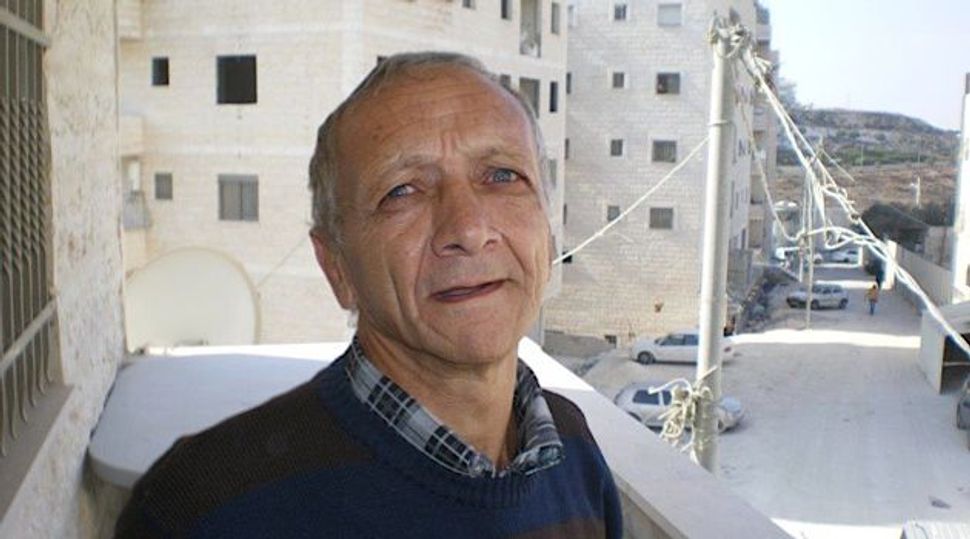 In a Neglected Neighborhood: Israel has initiated demolition proceedings against eleven high rise buildings including the one where Said Abu Asab lives. Image by Ben Lynfield

Ras Khamis, a poor neighborhood in a neglected part of Jerusalem, might be mistaken for being outside the city altogether. It lies beyond the separation barrier that Israel has erected to fence itself off from Palestinians in the occupied West Bank, and the neighborhood’s Palestinian residents receive almost no city services.

They burn their own garbage, among other things, because the municipality conducts no garbage pickups in the district.

But one day in late October, Daoud Sabha, who recently put his life savings into buying a high-rise apartment in Ras Khamis, discovered that the municipality had not forgotten about his new neighborhood after all. Posted to his high-rise building, he found a copy of a government request, filed recently with a Jerusalem court, to demolish the building and 10 other high-rise apartment buildings nearby.

If it’s carried out, that will be the largest demolition project implemented in Jerusalem since Israel won control of the city’s eastern Palestinian sector from Jordan in the 1967 Six Day War. More than 1,000 people could lose their homes.

“This whole neighborhood is poor people,” said Sabha, who worked in maintenance at the Jerusalem Post for 19 years. “Where will they live? In an alley?”

Sabha said that he had put all his severance pay into buying his apartment. And he still had to go into debt to afford the buying price of over $85,000. But the city says it is simply enforcing the law and protecting public safety, because the entire complex was built without a permit and in disregard of engineering and building codes.

“It’s the municipality’s obligation to make sure all buildings are safe,” said the Jerusalem municipal government spokeswoman Brachie Sprung. “What is going to happen if something happens to the building? We’ll be held responsible.”

Sabha snorted at this explanation. “All of a sudden the municipality remembers it’s without a permit,” he said. “They should have said so from the beginning… This is racism against poor people who need houses. It is great tyranny to put people into the streets.”

Dovish Israeli advocacy groups say that Palestinian residents in East Jerusalem are forced to build illegally because of discriminatory zoning and licensing practices designed to protect the city’s Jewish majority.

“One hundred percent they were forced into this,” said Sari Kronish, an architect at Bimkom – Planners for Planning Rights. “It is ridiculous that the state keeps insisting Palestinians in East Jerusalem who build without permits are criminals. They live in neglected and dense neighborhoods, and they don’t have an opportunity to build legally because of discrimination.”

But Sprung denied that the municipality discriminates. “The municipality on a regular basis provides building permits in the west and the east,” she said.

Currently the ethnic makeup of Jerusalem is about two-thirds Jewish and one-third Palestinian. Though the Palestinians have certain rights as residents of the city that Palestinians in the West Bank are denied, they are not Israeli citizens and, by and large, don’t wish to be. Israel’s 1967 annexation of the city’s eastern sector is not recognized by the international community, including the U.S., and under the Oslo Peace Accords of 1993, the city’s final status was to be settled in negotiations between Israel and the Palestinian Authority. The Palestinians of East Jerusalem, including Ras Khamis, boycott municipal elections, in which they could vote, on the grounds that their participation would be seen as endorsing Israeli sovereignty. They also do not serve in positions of city political leadership or participate in the local political process that makes decisions affecting their lives.

Why the city chose to act against the buildings only now and not five years ago, when the high-rise construction began in plain and open sight, is a matter of dispute. Sprung said the city did not enforce the law earlier because of Ras Khamis’s unique geographic position and security situation. Due to its position beyond the separation barrier, which can be crossed only via a checkpoint, city workers require a police escort to enter Ras Khamis. It is otherwise not safe for city employees to work behind the daunting grey separation barrier, said Sprung. That is also why the municipality has not provided the area with municipal services, such as garbage removal and street cleaning, she said.

“This is not like any other neighborhood in Jerusalem,” said Sprung. “It is challenging for us because we can’t go in whenever we want.”

Yehudit Oppenheimer, head of Ir Amim, a group that advocates for Palestinian rights in East Jerusalem, said the city did not act against the construction immediately because it was pleased that Palestinians were moving out beyond the barrier. “They were happy to turn a blind eye and push people to move out of the center of Jerusalem,” Oppenheimer said.

Israel holds that its annexation of the city’s eastern sector has made Jerusalem today a unified city. But the separation barrier’s path right through the city seems to belie this claim when it comes to Ras Khamis and several other Arab neighborhoods.

Jerusalem Mayor Nir Barkat has said that Arab neighborhoods beyond the separation barrier should not fall within the Jerusalem municipal boundaries in the future, and that the city boundary should be “identical” to the barrier’s route.

In late 2011, Barkat proposed that the municipality stop operating in Ras Khamis and other Arab neighborhoods beyond the barrier altogether. Responsibility for these areas, he said, should be transferred to the Israeli military body that runs the West Bank, the civil administration. This was seen by some as a bid to unload the area’s 70,000 Palestinians and thereby shore up Jerusalem’s Jewish majority.

Amid the city’s de facto absence from this area within its own boundaries, building regulations have not been enforced at all. High-rises have sprouted in recent years and become a magnet for lower income Palestinians from elsewhere in the city.

Said Abu Asab, who worked for 26 years as a projectionist at cinemas in West Jerusalem, also drew on all his severance pay, like his neighbor Sabha, to buy an apartment in Ras Khamis. He said it was either buy in this neighborhood or stay with his wife and three children in a crowded basement dwelling in the Shuafat refugee camp.

“My wife sold the gold of her dowry so we could buy this place,” he said in his living room, decorated by a calligraphic inscription from the Dawn chapter in the Koran, which refers to taking refuge in God from “the mischief of created things.”

Since the demolition announcement was posted in the neighborhood, “I don’t sleep at night,” he said. “I’m thinking where will I go? Where will the kids go?

“My house in the camp was beneath the ground and had no windows. For 10 years I lived there. I got asthma. Why did I stay for 10 years? No money,” he said after serving his visitor sweetened coffee.

“I see Israeli people satisfied, the wife has a car, the children have cars, they go shopping, they go on trips abroad,” he said. “My dream was just to have a home and they take it from me. For me this is a five star hotel.”

Jamil Sanduka, the head of the Ras Khamis residents committee, said his group had hired a lawyer and filed a motion with the court objecting to the city’s demolition request. That has halted its implementation, for now.

But Sprung denied that the city’s demolition request was aimed at demolition at all. The idea of posting copies of the request in the neighborhood, she said, was to get residents to step forward for court proceedings that would finally resolve the district’s status. “These are not demolition orders,” she said. “We are saying, ‘Come to court, let’s understand what is going on here.’ The municipality is not saying, ‘Come we want to destroy your home.’”

But the notice obtained by the Forward says explicitly: “The honorable court is asked to use its authority according to clause 212 and issue a demolition order.” This was necessary, the notice said, because there was no approved building plan for the structure and failing to issue a demolition order would send a “message to the public that it is possible to violate the laws of planning and building… and thus harm the status of the law in society.”

Sabha, the former Jerusalem Post employee, said he has no plans to hire a lawyer of his own. “I won’t do anything because I rely on God only,” he said.