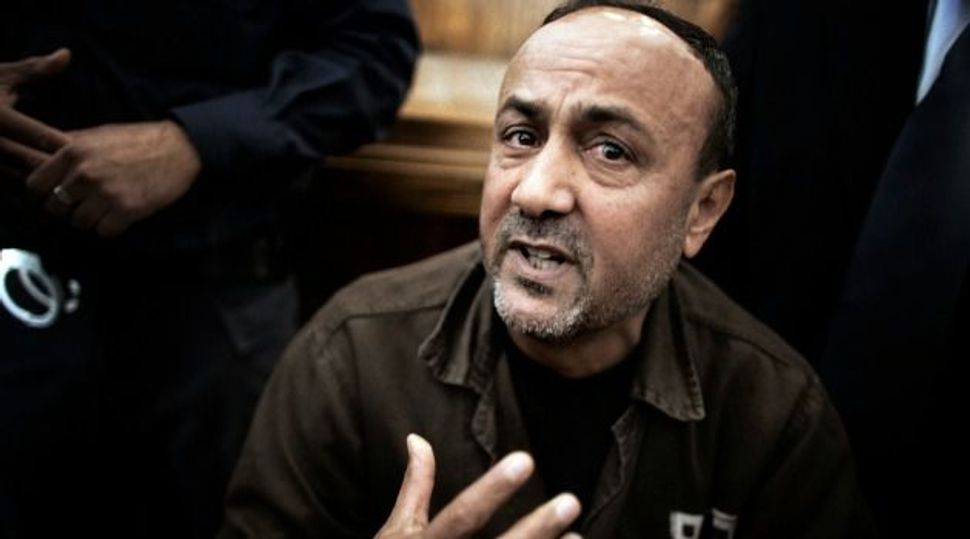 Speaking in Magistrate Court: Palestinian Fatah leader Marwan Barghouti was sentenced to life imprisonment in 2002 for organizing anti-Israeli attacks during the Second Intifada in 2000. Image by Getty Images

In October, supporters of Marwan Barghouti, perhaps the most prominent of the Palestinian militants currently in Israel’s prisons, held a high-profile demonstration in a unique venue more than 4,000 miles away from Israel.

The demonstration, in which they called for Barghouti’s release, was staged off the coast of South Africa, on Robben Island, where Nelson Mandela spent 18 of his 27 years in prison for plotting violence against the apartheid regime then ruling his country.

It was a choice that underscored the belief of Barghouti’s supporters that he is a man who, like Mandela, can use the currency of his long time in prison to achieve their goal of a Palestinian state.

After Mandela’s death December 5, Barghouti himself rushed to reinforce this image, saying in a letter written from prison that he reminds himself daily of Mandela’s struggle, “and all sacrifices become bearable by the sole prospect that one day the Palestinian people will also be able to enjoy freedom, return and independence, and this land will finally enjoy peace.”

Many Israelis dismiss the notion of Barghouti as a Palestinian Mandela. And they reject in particular the idea that the way in which Mandela reluctantly turned to violence shares anything in common with Barghouti’s actions. There are, however, some prominent Israelis who say the analogy could work.

“From the point of view of uniting the Palestinians and leading them to real peace, Barghouti is very important,” Alon Liel, a former director general of Israel’s foreign ministry, told the Forward.

Like Mandela, Barghouti, a member of the secular Palestinian faction Fatah, does seem to enjoy a status in prison that transcends the deep divisions that plague Palestinian society. Palestinians consistently select him in polls as their first choice for president. Even Hamas, the Islamist faction in bitter conflict with Fatah, acknowledged his status when it sought, unsuccessfully, to convince Israel to include Barghouti in the group of 1,027 prisoners it freed in 2011 in exchange for the release of Israeli soldier Gilad Shalit.

“Most Palestinians believe that Marwan Barghouti’s positions, work and role in supporting Palestine are similar to that of Mandela’s [in South Africa],” said Jamil Rabah, director of the Ramallah-based polling company Near East Consulting.

On the Israeli side, while many dismiss the Mandela-Barghouti parallel as hyperbole, veteran peace activist Uri Avnery thinks that it stands up to scrutiny. “No one is the same, but I believe that Marwan Barghouti could fulfill a similar function in reconciliation [to that of Mandela],” he said.

If Avnery, founder of the Gush Shalom peace movement, is known as a dreamer, the same can’t be said of Liel, who believes he is the only Israeli who was friends with Mandela and Barghouti.

Liel, who served as Israel’s ambassador to South Africa during its transition to democracy from apartheid, told the Forward that he sees several echoes of Mandela in Barghouti. “The comparison is being created by the years in jail,” he said. “Barghouti, by spending such a long time in jail and by being 20 years younger than [Palestinian Authority President Mahmoud] Abbas, [is becoming] a legend in the eyes of his people.”

In Palestinian parts of the West Bank, one is never far from a Barghouti portrait, whether it’s hung in a shop or painted as a mural. More often than not it shows Barghouti’s iconic triumphant pose in handcuffs. Barghouti was perhaps the foremost leader of the second intifada, and since 2004 has been serving five life sentences plus 40 years in an Israeli prison.

He was convicted of five counts of murder and one of attempted murder, of conspiracy to murder, and of activity and membership in a terrorist organization. He was also a leader of the first intifada, during which he was arrested by Israel and deported to Jordan. He lived there until 1994, when the Oslo Accords allowed him to return home.

Military figures who encountered him in the course of their duty often say that his record speaks for itself. “He is not a person of peace and is not a person of compromise,” said Jonathan D. Halevi, a retired lieutenant colonel who had dealings with Barghouti in the 1990s when serving in the military body that governs the West Bank. Halevi, today a senior researcher at the Jerusalem Center for Public Affairs, “cannot find anything that supports the assumption that he may be ready for any concession.”

But there are Israelis who remember a different Barghouti. After the signing of the Oslo Accords in 1993, Barghouti developed a reputation as a would-be peacemaker. Through the mid-1990s, he was involved in numerous meetings with Israeli politicians from across the political spectrum and with the Israeli peace camp.

When the peace talks fell apart and violence returned, Barghouti abandoned his embrace of nonviolence to become a senior leader of the Tanzim, Fatah’s armed resistance group. Though the group took responsibility for numerous attacks, Barghouti condemned attacks on civilians inside Israel. “I, and the Fatah movement to which I belong, strongly oppose attacks and the targeting of civilians inside Israel, our future neighbor,” he said then. “[But] I reserve the right to protect myself, to resist the Israeli occupation of my country and to fight for my freedom.”

Nonetheless, at his 2004 trial, Israel presented evidence that he supported and directed such attacks. Still, as recently as at his last public court appearance, in January 2012, Barghouti reiterated his support for a two-state solution to the Israeli-Palestinian conflict, with borders to be based on Israel’s internationally recognized 1967 lines.

This has led to the strain of thought that if freed, Barghouti could be the key to an accord.

It is based on the belief that with Barghouti, all options are on the table — and if a peaceful option is the most pragmatic, he will take it seriously. “Betting on negotiations alone was never our choice,” he wrote in 2009. “I have always called for a constructive mix of negotiation, resistance, political, diplomatic and popular action.”

Unsurprisingly, Barghouti’s eulogy to Mandela highlighted the South African’s adaptability, which the Palestinian claims stands at the center of his own worldview. “I salute the freedom fighter and the peace negotiator and maker, the military commander and the inspirer of peaceful resistance, the relentless militant and the statesman,” he wrote.

Even Shimon Peres indicated, before taking up the presidency of Israel in 2007, that he favored pardoning Barghouti, though he has not done so. Israeli politicians who have advocated freeing Barghouti to progress the cause of peace include Meir Sheetrit of the centrist Hatnuah party, and Labor lawmakers Benjamin Ben-Eliezer and Avishay Braverman.

In fact, Barghouti was, for a time, involved in back-channel talks with Ehud Barak, prime minister before and during part of the second intifada. And the conduit between the two men was none other than Liel.

Liel considers the violence perpetrated by Barghouti as far more serious than anything committed by Mandela, and says that he does not have ability to forgive. But he believes that, like Mandela, Barghouti has what it takes to forge peace. “I think he should be released in the context of saving the [peace] talks and to prevent a total collapse,” he said.

Avnery takes another approach. “There are very great similarities: Mandela was an active terrorist, imprisoned for 27 years because he refused to condemn terrorism, and when he came out he moved forward towards peace and reconciliation,” Avnery said.

Avnery was himself a member of the pre-state Irgun militia that the British who were then ruling Palestine pursued as a terrorist group. As far as he is concerned, acknowledging Mandela’s violence is crucial amid world celebration of him in death because, among other things, it creates a precedent for Barghouti. “If someone has been a terrorist in the eyes of the Israelis and a freedom fighter in the eyes of the Palestinians, it does not make him unfit as a negotiating partner,” Avnery said. “On the contrary, it helps him in establishing his credentials among his own people.”

But Benjamin Pogrund, the South African journalist who broke the story that the African National Congress was taking up arms in 1961, rejects any comparison between Mandela’s violence and that of Barghouti and other Palestinian militants.

Pogrund, who now lives in Jerusalem, held secret meetings with Mandela even when he was underground. The two men became close friends. He said that, even despite connections between the ANC and the Palestine Liberation Organization, including training provided by the PLO, Mandela’s and Barghouti’s approaches were worlds apart.

The two main bombings that hurt whites in South Africa were blips while property was the main target, he said, adding that a deep “personal morality” guided Mandela. “Whites didn’t have to worry about suicide bombings and drive-by shootings,” he said.