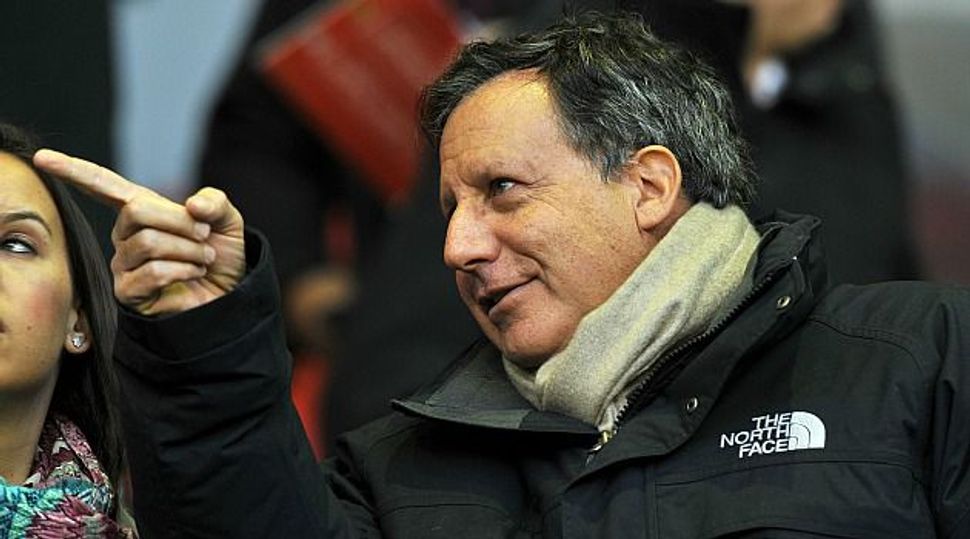 What is like being the chairman of two of the biggest sports clubs in the world? Only one man can answer that.

Tom Werner, a former television executive turned sports chairman, took control over the Boston Red Sox in 2002 when his Fenway Sports Group Company bought the storied club for an estimated $660 million. Days after the club was bought, Werner was named chairman of the team. During Werner’s time as chairman, the Red Sox have won three World Series championships.

In 2010, Werner and his business associates decided to try something new. They acquired Liverpool Football Club. One of the most historic football (soccer) clubs in the world. On December 1 2012, Werner was named chairman of the club. In the last two years, Werner has helped the club return to glory. Liverpool are currently sitting atop England’s Barclays Premier League.

The Forward’s Raphael Gellar spoke to Werner about his connection with Israel, his relationship with the Clinton family and what is like being chairman of the two most successful sporting clubs in the world.

Raphael Gellar: How do you identify with Judaism and the state of Israel?

Tom Werner: My Jewish ancestors moved to America in the 17th century, but I have identified with Israel since I was a child. I lived in Jerusalem in 1971 when I made a documentary called Israel:One Day at a Time. I interviewed many Israelis and Palestinians, from politicians to bus drivers- including David Ben Gurion, whom I visited at his home in the Negev.

Why did you decide to get involved with Liverpool when you were very successful as the chairman of the Red Sox? What is it like being the chairman of two of the most well-known sport franchises in the world?

Liverpool shares much in common with the Red Sox. They both are very special clubs with a proud history and a strong fan base. I feel privileged to be working in this field and hope my contributions leave the clubs in better shape than when we first got involved. Regarding the Red Sox, I am as proud of the fact that we saved Fenway Park as I am that we have brought three championships to Red Sox Nation.

What are the differences between the MLB and the Premier league in regards to being a chairman of a team or club?

Obviously baseball and football have different rules. Two of the rules in the EPL that are most different are relegation and the transfer market. In the end though, if you field an excellent squad, your revenues ought to grow. And the stronger the revenues, the stronger the club because you can reinvest it in player payroll.

Are you happy with the direction Liverpool headed?

I am very pleased with the direction Liverpool is headed. Brendan Rogers is an excellent manager, and our football department under the leadership of Dave Fallows is outstanding. Ian Ayre and Billy Hogan are fine executives as well, and I think steady improvement is our goal.

During Bill Clinton’s administration you were close with both Bill and Hillary, what are your thoughts on the subject of Hillary running for president in 2016?

I think Hillary Clinton would make an outstanding President. There is a sense of paralysis in Washington, and I believe she would help break the gridlock.

Since your group bought the Red Sox, the Sox have won three World Series. Are you planning to join Theo Epstein with the cubs soon and help them to their first title in almost 100 years?

I have no intention joining the Cubs. It has been a wonderful decade here in Boston and our work is ongoing. While we took a week or so to enjoy 2013, we are hard at work building a team that goes back to work next February!

You helped develop the careers of Billy Crystal, Danny DeVito and Tom Hanks, do you ever miss the television business?

I still have a hand in the television business. In fact, my next hour is devoted to working on a half hour comedy for Starz with my partners LeBron James and Maverick Carter and Mike O’Malley. It is a show about the twin themes of gratitude and greed.