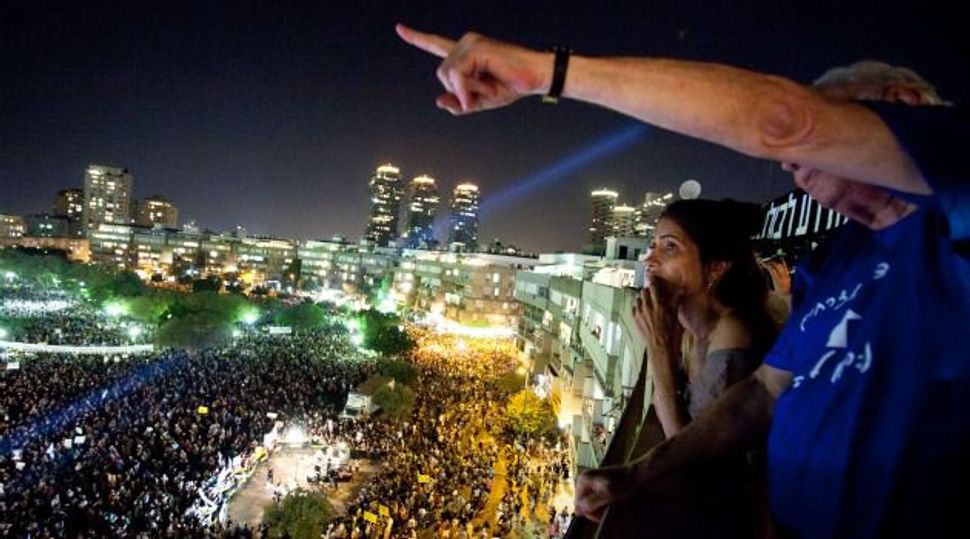 As threats from Iran, violence in the occupied West Bank and instability in Syria and Egypt dominate public discourse these days, Israel’s once-buoyant movement for social democracy that topped them all just two years ago has, silently, all but vanished.

During the long summer days of 2011, in the tents of Israel’s protest cities, many young idealists believed that they could change their country forever. But developments over the last two months of 2013 have underscored that the future that they saw ahead for the movement was a mirage.

The protest leaders wanted a bolstered public sector and a strengthened welfare state. And, to be sure, the protests had their impact on life in Israel — but not the impact that the young ideologues who led them were calling for. The government response involved far more superficial innovations; primarily, a decrease in cell phone costs, some limited affordable building projects and the elimination of family fees for three-year-olds in kindergarten.

In November, what was perhaps the most trumpeted decision the government announced in response to the discontent of that summer offered, at best, a muddled bottom line that split the poor and the middle class protesters who had marched together: The government, at the urging of Finance Minister Yair Lapid, waived an income tax increase scheduled for 2014 that ranged from 1% to 2% depending on an individual’s income.

This was the opposite of what the protest leaders had in mind. The scheduled tax increase was riling the middle class but had little impact on the working class and the poor, for whom welfare and services, not taxes, are key. After tax credits, poor and working class Israelis pay only minimal amounts in taxes. In a column, the deputy editor of Globes, Israel’s business newspaper, estimated that only 10% of the taxpayers, those making over $5,450 per month, would actually benefit significantly as a result of the cancellation.

Instead, Finance Minister Yair Lapid, who rode to power on the wave of public feeling generated by the protests, cancelled the tax increase and thereby eliminated the expected revenue surplus. The scheduled tax increase was riling the middle class but had minimal impact on the poor.

For lower-income Israelis, it was the second blow. Several months earlier, they lost out when Lapid increased Israel’s sales tax by 1%, a regressive taxation felt most heavily by those at the bottom of the income scale.

Finally, just three days before Lapid’s income tax decision, the faded power of the once-popular social democracy cause was driven home by a separate event: In a primary vote, Israeli Labor Party members shunned the Knesset’s social democracy champion as their party leader, and replaced her with a much milder figure.

Shelly Yachimovitch won the top spot in Labor shortly after the 2011 summer of protest, and put all her money on the social democracy issue. She sidelined peace with the Palestinians as a Labor party issue, won that year’s primary, and spent her time as opposition leader fighting for big changes on the domestic front.

But today’s Labor party has rejected her, choosing instead Isaac Herzog, a wealthy Tel Aviv lawyer and, in contrast to the iconoclastic Yachimovich, a bastion of the ruling elite — he is the son of Israel’s late former president, Chaim Herzog.

Herzog has less interest in social causes and is returning the Palestinian issue to center stage. Almost immediately after election he headed to Ramallah to discuss the peace protest with Palestinian President Mahmoud Abbas. And the public likes the new Labor — two polls published on November 29 indicate that it gained popularity worth at least 2 of the Knesset’s 120 seats in the changeover.

Amir Paz-Fuchs, a social scientist who focused heavily on the social democracy movement after the protests, said that Lapid’s decision and Yachimovitch’s defeat are “symptomatic of the fact that the movement is heading towards the end of the road.”

Paz-Fuchs, the head of a project on privatization and state ownership at the Van Leer Jerusalem Institute, added: “It’s as if Netanyahu on one hand and the Chamber of Commerce on the other hand held their breath and waited for it to pass, and it did.”

Licking its wounds, the Yachimovich camp in the Labor Party recognizes that it put all its eggs in a basket that ultimately fell apart. “The social protest movement melted somehow,” Labor lawmaker and Yachimovich loyalist Nachman Shai told the Forward. “We thought at the time that maybe it would push Labor to power or make for a larger party. But it didn’t work out.”

Hilik Bar, Labor’s secretary-general, who was careful to stay neutral during the leadership race, afterwards said that Yachimovitch’s emphasis on social issues went too far. “I understand her but as a party [Labor] should have put more emphasis on national security and peace affairs.”

But how did the political capital of social democracy evaporate so quickly? And how did a cancelled income tax rise become presented as a partial answer to the discontent raised in 2011?

Yossi Shain, chair of political science at Tel Aviv University, contends that the answers lie in the complexity of what actually happened during the social protests, and some politicking since.

The protests were, in part, galvanized by a desire to see the kind of changes that social democrats call for, such as a bolstered public sector, and a strengthened welfare state. But the protest leaders, Shain said, overestimated the extent of this sort of principled protesting. The majority of those who came out, in his view, simply wanted to see their monthly bills decrease. They had no expectation of deeper changes in society. In a sense, they remained focused on the issue that brought 2011’s first mass campaign in the first place — the campaign against high cottage cheese prices.

“[Yachimovitch] did not grasp the middle class aspect of it,” said Shain.

But one person who did was Lapid. “Kadima crumbled and the center is where the votes were and she didn’t get them,” said Shain. “Lapid jumped in and took the votes.”

Paz-Fuchs agreed, Lapid, he said, “managed to capture a very significant — but actually partial — aspect of the protest, which was the medium income protestors saying ‘we just want things to be easier.’” Paz-Fuchs and Shain said that Lapid tamed the message of the social protests from one of social democracy, as articulated by the protest leaders, to the money-in-your-pocket concerns of many who joined.

Stav Shaffir, the protest leader turned Labor politician, acknowledges that “the main financial policy is still guided by Netanyahu” and therefore far from the protestors’ vision, and that affordable housing projects are “not in the spirit of what we demanded.” However, she argues that in Knesset, the message is ever present in the discourse, and at least as a consideration in policy — and that her party is still fighting the fight on the protests and it “doesn’t matter who stands at the front [as leader].”

“It’s everywhere — in the finance committee and in the decisions of the government,” she said of the protest message, going on to add: “The discourse we have today is in no way similar to what we had before the protest — every politician wants to be remembered for solving an issue raised in the protests.”