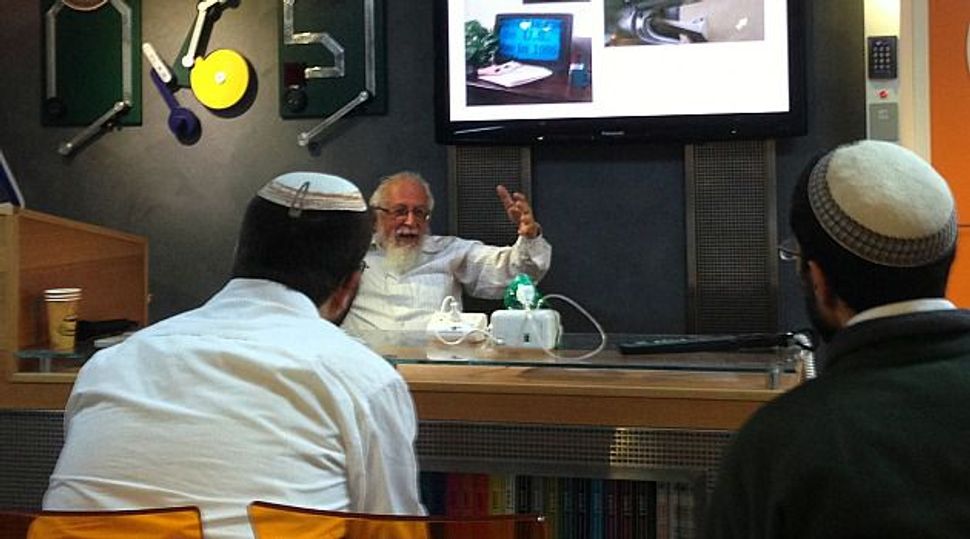 A group of rabbis studying public speaking, psychology and counseling in New York or London would hardly raise an eyebrow. But here in Israel, the group of 19 rabbis gathered in a seminar room and doing just this is breaking new ground.

The rabbis who have been studying these topics in Modi’in want desperately to obtain pastoral and community leadership skills that in America are considered part and parcel of spiritual leadership. But Israel’s rabbinate has developed quite differently from its Diaspora counterparts, focusing more narrowly on religious needs. And these rabbis have traveled from their homes across the country for a seven-hour seminar each Monday for the past year and a half to learn an entirely new concept of what it can mean to be a rabbi.

“My goal is to be a rabbi in a community, but while my yeshiva learning gave me the dry Jewish law, it didn’t give me the ability to apply it to a community, never mind to deal with trauma issues or publicly speak,” said Tzvi Davidson, a 32-year-old teacher.

The contrast between rabbis in Israel and those in the Diaspora runs much deeper than the fact that, unlike in the United States, rabbis are almost exclusively Orthodox. The deeper contrast goes to the heart of what it means to enter the rabbinate altogether.

In Israel, rabbis are variously yeshiva teachers, educators, politicians, scholars, cult figures and state employees in charge of a city, neighborhood or religious site. But they are rarely employed by private synagogue communities to be the type of pastoral figures that are familiar in the Diaspora.

Moshe Shilat, a 36-year-old lecturer in religious law at a yeshiva in Sderot, said that upon receiving rabbinic ordination he could “go in to a community of 20 to 30 families and tell them the Halacha if they ask. But I wouldn’t know how to deal with people more than any other person would.”

Davidson and Shilat’s cohort is the first in the two-year program of the Barkai Center for Practical Rabbinics, a philanthropically funded not-for-profit whose mission is “to improve the fabric of Israeli society by intensively training Israeli rabbis in all aspects of communal rabbinics so that they can lead their communities to a more meaningful connection with Judaism and act as a unifying force in Israeli society.” The Center is supported by individual donors and two American family foundations — the Harri Hoffmann Foundation in Milwaukee and another that wants to remain anonymous.

Unsurprisingly, one of the key figures behind it is an American-born rabbi. Barkai’s founder, David Fine, a former communal rabbi in Milwaukee and in Overland Park, Kan., is open about wanting to import American Jewish values to Israel.

“Most Israelis, even the religious, have generally viewed rabbis as ‘religious technicians,’ as people to provide specific services,” he said. “Many are now looking more to the American model of Jewish community, which sees the synagogue as much more than a place to pray… as a place to build community, and the rabbi as a builder and leader of community.”

All the men on the training course — and given the Orthodox stranglehold on rabbinical funding, they are all men — plus the other 80 who applied but weren’t accepted because of a lack of space want to be community rabbis, but only a small minority currently hold positions. Few Israeli synagogues have a dedicated rabbi, except for those attended by a state-salaried city or neighborhood rabbi. However, over the past decade a trend has emerged of communities fundraising to take on at least a part-time rabbi. The Barkai students plan both to catalyze this trend and to be on hand when congregations do start looking for candidates.

Trainee Lavi Hendel, 31, told the Forward that he thinks the current lack of professional community leadership stems from the setup by which, in the Jewish state, the Jewish religious infrastructure is state-funded. “In the Diaspora, people understand that everything costs money, including synagogues, and that congregations benefit from having professionals,” said Handel, who lives in the northern city of Nahariya and makes a six-hour round trip for the seminar. “Here in Israel, people think that everything needs to be free.”

Davidson was in the process of piecing together his own personal curriculum through counseling and psychology courses when he heard about Barkai and enrolled. He was “clueless” regarding what he considers a key skill for a congregational rabbi: treatment for people suffering psychological trauma. “Now I feel I have the initial ‘first aid’ of what to say and what not to say,” he commented, adding that the oratory training has made him a much more effective speaker.

The session that the Forward visited was intense, and academic at points, involving discussions about tragedy, hardships and coping strategies. It was led by a psychologist, Eli Sharon, who wears a yarmulke but has a different take on religion to that found in the yeshivas where the trainees studied — and where many of them continue to teach. “We need to remember that spirituality isn’t just religion, it is also music, literature, etc.,” Sharon said. The rabbis were there not to argue about religious ethos, but rather to learn a whole new discipline, and they listened attentively.

To the Diaspora mind, a visit to the private Barkai course suggests that the ground the rabbis are covering should be integrated, even as an elective, into the mostly state-funded yeshiva curriculum. But only a tiny minority of students at Israel’s yeshivas are destined to work as communal rabbis, which means that this kind of national course is seen as the best setup.

The big question, though, is, where will the Barkai rabbis end up? When the first trainees graduate this summer, they will be exactly what many Diaspora synagogues search for and fail to find — rabbis who are Modern Orthodox; not only Zionist, but also actually Israeli, and fully trained for community roles. What is more, positions in Israel are hard to find and poorly paid.

Davidson is determined to stay in Israel. “My goal is not to go abroad, but I recognize that if I went abroad, the mentality is such that there are more options,” he said. But it’s not clear that everyone will show his determination and patience to stay put while waiting for job openings, and Israel’s loss could be the Diaspora’s gain.