MLA: No Boycott, But Censure of Israel for Alleged Curbs on U.S. Scholars 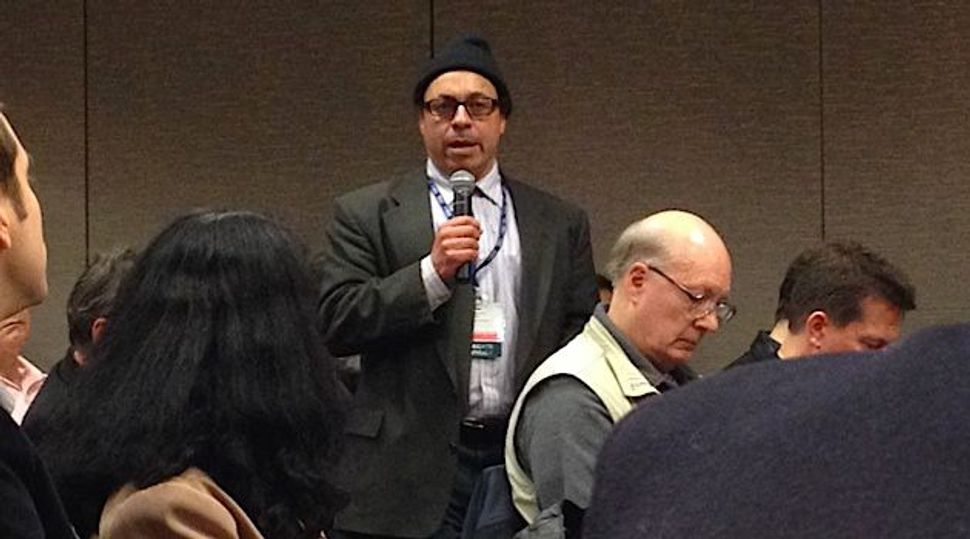 Before the Vote: Professor Samer Ali moderates a panel supportive of BDS at the Modern Language Association conference on Jan. 10, 2014, one day before the organization voted on a resolution on Israel. Image by Menachem Wecker

But the only events of Jewish interest that most people seemed to care about were four sessions that related not to any issue of Jewish scholarship but to the question of how — or if — scholars should take a stand on the policies and practices of modern day Israel affecting fellow scholars.

After exhaustive debate, MLA delegates made it clear that while they were not prepared to boycott Israel, as some smaller academic groups have recently advocated, Israel’s conduct towards American scholars seeking to work in the occupied West Bank merited censure in their view.

Israel, said the resolution the delegates passed on January 11, has “denied academics of Palestinian ethnicity entry into the West Bank” in violation of international law and thereby “restricted the academic freedom of scholars and teachers who are U.S. citizens.” This has also disrupted “instruction, research, and planning at Palestinian universities,” the resolution said.

The MLA urged the U.S. State Department “to contest” Israel’s blocking of American academics to the West Bank “who have been invited to teach, confer, or do research at Palestinian universities.”

The vote by the delegates — a small subgroup of the 7,500 MLA members who attended the conference — was close: 60-53, with those supporting the resolution getting 53%. But this appeared to reflect a deep divide within the broader membership of one of the country’s major academic associations.

It is a division that will not close soon. Under the MLA’s procedures, the vote at the conference by the so-called Delegate Assembly is just the beginning. The resolution now goes to the MLA’s executive council, which can decide to kill it, send it back to the Delegate Assembly with edits or put it before the MLA’s 28,000 members for a full vote.

According Rosemary Feal, the MLA’s executive director, the resolution is likely to go to the group’s full membership for a vote in late spring, assuming the council completes its fiduciary review in February. This promises to draw in partisans from both sides for the battle to come.

Cary Nelson, a former president of the American Association of University Professors, who opposed the resolution, sensed trouble ahead for his side in this scenario. There was, he said, “some sympathy” for the movement to boycott, divest from and sanction Israel on the MLA’s executive council. Among other things, he noted, the 18-member council included among its ranks one of the Israel resolution’s cosponsors — Richard Ohmann, an emeritus professor of English at Wesleyan University. His tenure on the council, however, ended with the conference.

Another executive council member is Samer Ali, a University of Texas professor of Middle East studies who moderated a panel discussion at the conference supportive of BDS, as the boycott, divest and sanction movement is known.

Nelson, a professor of English at University of Illinois at Urbana-Champaign, described the MLA as being “clueless” about politics. “They are babes in the woods,” he said. “It’s very risky for them to take on these issues…. Anytime you have an organization whose decision-making body has a clear political interest that might be against the best interest of the organization, you have a big risk.”

But Russell Berman, a past president of the MLA, noted that many resolutions fail to pass the full membership simply because the required 10% threshold for voter participation is not reached. “I think a lot of the members don’t have particularly a dog in this fight,” he said.

The divide opened up by the MLA’s decision to engage the Israel-Palestinian issue was also on display at the panel discussion on BDS moderated by Ali and stacked with panelists sympathetic to this movement.

The session, one of more than 800 held during the four-day conference, drew about 150 people, ten times the number who came to a handful of other sessions the Forward attended. The panelists included Omar Barghouti, a founder of the international boycott movement against Israel, and David Lloyd, a leader of the U.S. Campaign for the Academic and Cultural Boycott of Israel. No one on the panel was opposed to BDS.

By comparison, a counter-panel held by supporters of Israel across street from the MLA session and outside the MLA’s auspices drew about 60 people.

At the MLA panel, among audience members who rose to offer comments or pose questions, five voice their opposition to BDS and four were in favor.

One surprise critic of BDS at the session, albeit a conflicted one, was Ali, the panel moderator. “I believe that the lessons of the Holocaust call on us to reject any ideology that privileges one group of people over another, which Zionism unfortunately does,” said Ali. Nevertheless, he said he could support a two-state solution to the Israel-Palestinian problem, if one was reached, or a binational state and described himself as “agnostic” of the question of using BDS as a tactic against Israel. “I find it bizarre to boycott Israeli universities when so many of our colleagues there eloquently and bravely criticize Israel’s occupation, and some have been forced to leave,” he said.

The MLA drew strong condemnation from several Jewish groups, including B’nai B’rith International and Stand With Us, for permitting the panel under its auspices. But MLA officials explained that any member can submit a proposal for the conference, provided he or she does so by the April deadline.

Two Jewish groups, Hillel and the Israel on Campus Coalition, learned in December that the panel on Israel and BDS would be held at the conference. They then tried to submit a proposal for a counter-panel — some eight months after the April deadline — but were told that would be impossible.

Jacob Baime, the executive director of the Israel on Campus Coalition, said just before the convention that MLA members opposed to the resolution and to BDS felt like they were “being shut out.”

“They want a chance to participate in this discussion. The conversation should be far broader than the panel as it stands,” he said.

But Feal, the MLA’s executive director, contested this charge. “Our convention is a meeting by and for members. We do not give space to outside groups to organize panels,” she said. “If an MLA member had submitted a special session proposal by the deadline, the Program Committee would have, of course, considered it. In fairness to members who submit proposals in a timely fashion, we do not accept late proposals, no matter what controversies may exist.”

Both the BDS panel and the debate and vote on the Israel resolution took place on the heels of a vote by the much smaller American Studies Association in December to boycott Israeli academic institutions. The ASA vote, also meant to protest Israel’s policies towards the Palestinians, received wide publicity and put a high-profile spotlight on MLA conference’s Israel resolution.

Michael Kotzin, senior counselor to the president of the Jewish United Fund/Jewish Federation of Metropolitan Chicago, said it was noteworthy that the Israel resolution was “narrowly drafted” when compared to the ASA’s boycott measure. He suggested that the supporters of the resolution avoided calling for a boycott because they felt they wouldn’t be able to marshal enough support for such a call.

“I think our community needs to be careful in how we think about ourselves and talk about ourselves,” he said. “We are not victims. [So] let’s not talk about it that way. I don’t think it’s healthy, and it’s not effective in terms of what we want to do.”

MLA: No Boycott, But Censure of Israel for Alleged Curbs on U.S. Scholars