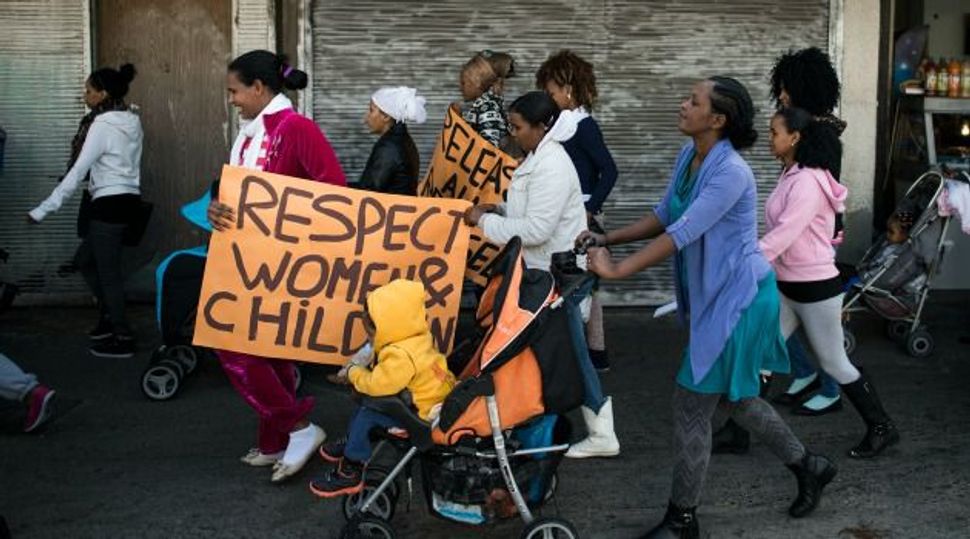 They are normally behind the scenes, but now they are the ones making a scene. Tel Aviv is in the throes of a pot washers’ rebellion.

In this city, you can eat in a fancy restaurant without ever encountering the illegal African immigrants who are most likely cutting your vegetables and cleaning the china. You can stay in a smart hotel and hardly notice the army of Africans in the kitchens and laundry rooms. A majority of the 60,000 African immigrants who have sneaked in to Israel illegally are working menial jobs here.

But in early January, they marched out of the shadows and into the limelight to protest the threat of mass detention and deportation that hangs over them. They marched on foreign embassies. Almost one in four illegals converged on central Tel Aviv for a mass protest.

There are also strikes. A call went out from protest leaders for their fellow Africans to skip work, and many have complied. At one trendy restaurant the owner is in no mood to talk about the past few days; the businessman has been at the sink washing up because his African employees have refused to do so.

This is the story of a community in which, overnight, hierarchies have vanished. Until now, detention was almost exclusively an issue for newcomers. Many Africans endured a stint in prison upon arrival but were released after a few weeks or months. They were given short-term visas that tolerate their presence in Israel; they went on to find work, to which the state turned a blind eye; and they rarely considered the possibility that they could imminently be detained.

But a new government shift means that old-timers are receiving summons to report to detention. More than 1,000 have already received notices, and others expect to receive them when they next go to renew their visas. Today, even the asylum-seeker aristocracy foresees a future enjoying the hospitality of the Israel Prison Service.

Philiops Tesfai has been in Israel since 2010 and is a highly atypical illegal immigrant: He’s fluent in German and English and has landed a well-paying job selling insurance. “In Israel now, you can’t plan for tomorrow — you have to live just for today,” he said, discussing his fear that he will end up in detention when he goes for his next visa renewal, in February. He added, “I will be treated like every other person in the community.”

Just three months before the protests started, the fortunes of illegals appeared to be looking up.

It seemed that even newcomers were to avoid detention, after Israel’s High Court stopped the state from detaining new arrivals for up to three years, deciding that the legislation it cited to justify the practice was unconstitutional. The government quickly passed new legislation that allows imprisonment upon arrival of one year, and indefinite detention in an “open facility” at any subsequent point. And, despite demands by African immigrants, the government has not implemented a transparent process for examining asylum requests, and it has failed to examine the vast majority of the 1,800 asylum applications received so far — leaving critics saying that it is failing to meet its responsibilities under international refugee conventions.

Claims that Israel’s handling of applications violates international law are “vacuous and propagandistic,” according to Israeli Foreign Ministry spokesman Yigal Palmor. He said that the applications are progressing, albeit slowly. “It is very difficult to verify their personal stories,” said Palmor. “Israeli bureaucracy is what it is and being slow is not a treatment that is reserved for foreigners.”

The 3,000-capacity “open facility” of Holot started operating last December and expects a large influx from the summons notices issued, which mostly require people to take up residency there by the end of January. The government wants it to be a kind of revolving door, with detainees deciding quickly that returning to their countries with $3,500 cash in hand as an incentive is preferable to life in this outpost in the Negev desert. In some cases, as with 54 women who moved to Sweden in early January, illegals are expected to be relocated to European countries with which Israel strikes deals.

In a sense this is phase two of Israel’s approach toward illegals. Over the past year, it sealed its southern border and virtually stopped new arrivals, and now it wants to return old-timers.

Holot looks likely to feed detainees to closed prisons in addition to dispatching people abroad. Inmates must go through a sign-in process three times a day, which, given its desert location, has led critics to question Holot’s designation as an “open facility.” Missing a sign-in is grounds for relocation to a closed prison — as has happened in the case of 150 detainees who held a protest march to Jerusalem in December, skipping sign-ins. These protesters have since started a hunger strike.

In Tel Aviv’s central bus station, which has become the unofficial community center of African illegals, the pristine attire of protest instigator Mutasim Ali contrasts starkly with the dingy surroundings. The Israeli stereotype of illegals doesn’t feature eloquence and political savvy, but given Ali’s background story, the kind of leadership he is now displaying is unsurprising.

It’s as a result of persecution for political activity that Ali ended up in Israel in the first place. He was imprisoned three times in his native Sudan for activities in the Sudan Liberation Movement, and fled in 2009 — arriving in Israel, coincidentally, at a time when American Jewish involvement in the Save Darfur Coalition was at a high.

The 27-year-old is happy in a job at a Tel Aviv hotel, but he decided to dust off his activist skills and launch the protests. He uses Facebook, fliers and cell phones to drum up support, and says that he has taken some inspiration from the Israeli social protest movement that flourished in 2011. “We have nothing more to lose,” he reasoned. “If we didn’t strike and kept on working without standing up for our rights, we’d all be in Holot.”

During his interview with the Forward, Ali held up a paper ticket like those dispensed in line for the deli counter at supermarkets. It documented his appointment with the Population, Immigration and Border Authority later in January — which he expects to end with a summons to Holot.

The stability that old-timer illegals have gotten used to includes family lives in Israel and children in Israeli schools. Some fear that the new government approach could leave in its wake numerous mothers raising children alone.

In a run-down one-room building a 10-minute walk from the bus station, Zebib Sultan was hard at work. It was 9:30 p.m., but the 30-year-old Eritrean woman was still busy planning a demonstration, and asked this reporter to wait on the street while she finished.

When she finally emerged, Sultan, director of the Eritrean Women’s Community Center, said that some men with wives and children have received summons to Holot. They are appealing based on their family responsibilities, but it’s unclear whether they will be successful.

“Women are in a state of fear because they know the responsibilities of a single mother,” Sultan said. “It’s very difficult here, as a refugee, to raise children, and it will be the worst thing if your husband is taken.”

There is no consensus among the protest leaders as to what they think it will achieve. Ali is pessimistic, fearing that “even if [government ministers] change the new approach now, they will do something worse than this.” Dawit Demoz, a 27-year-old Eritrean, is more optimistic, saying that he thinks the protests could capture the hearts of some Israelis.

He said that when Africans held a large protest without violence, “we showed that we’re not a threat to Israeli society.” Demoz commented: “I feel that Israeli society was surprised by what we did. They never thought that we are peaceful and organized.”

But if the results of a poll by the right-wing newspaper Israel Hayom are anything to go by, the public is still far from sympathetic. Some 61% of respondents want to see illegals deported to a country that is prepared to take them, and only 12% said they should be allowed to live and work in Israel.

The paper’s columnist Gonen Ginat wrote: “[W]e have had it up to here with the lies and the demagoguery and the cheap propaganda. You broke into our home illegally… And you are demonstrating against us? Is that how you thought you would convince us to meet you halfway?”

“So here is the answer: We do not believe a word you say… it is doubtful that a single bleeding-heart liberal still believes you.”

The government insists that it won’t be moved by protests. The Foreign Ministry defended the policies of the Jewish state by saying that it “tries to balance the need to control its borders with the need to protect the human rights of those who enter.” And Prime Minister Benjamin Netanyahu declared defiantly: “Neither protests nor strikes will help. We completely stopped the infiltration into Israel, and now we are determined to send away the illegal migrant workers who entered Israel.”