Israel Under Fire Over ‘Restrictions’ on Palestinian Academics — But What Is Truth? 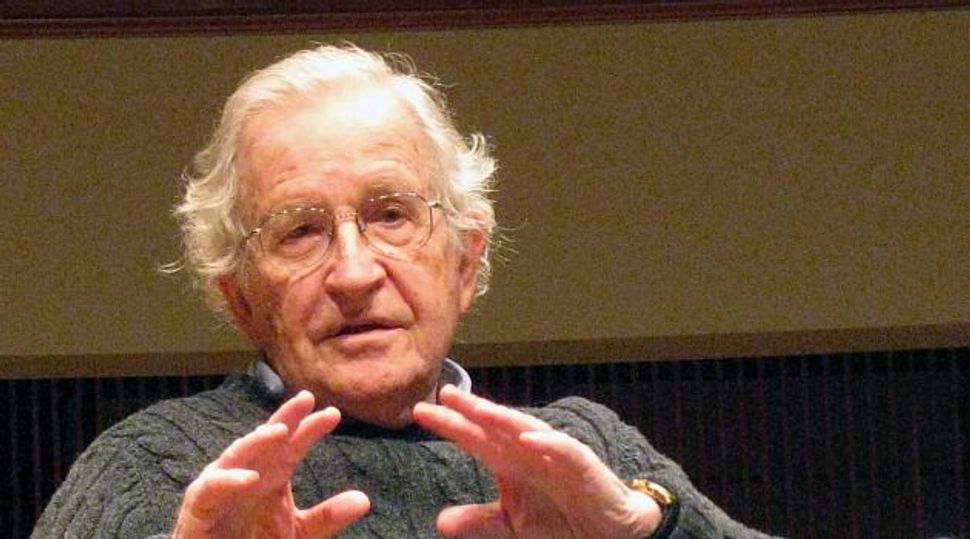 Noam?s Drama: Linguist Noam Chomsky was turned away by Israeli border guards when he tried to teach at a Palestinian university. How common is his experience? Image by getty images

In May 2010, Noam Chomsky, the famed linguist and left-wing activist, showed up at Israel’s Allenby Bridge border crossing, seeking to enter the Israeli-occupied West Bank from Jordan. For hours, Israeli border police questioned Chomsky, who was planning to lecture at Birzeit, a Palestinian university near Ramallah.

Then they turned him away.

Chomsky, a Jew and a harsh critic of Israel, claimed he was denied entry because of his controversial opinions and because he had chosen to lecture only at a Palestinian — not an Israeli — university. The academic, whose early linguistic specialty was Hebrew, compared Israel’s behavior with that of a “Stalinist regime.” But the Israeli government said a border official had simply made a mistake.

The two resolutions generated a storm of reaction, including condemnation of the ASA’s boycott resolution by nearly 200 universities, reported threats sent to the ASA and attacks on and defenses of both resolutions by prominent public figures.

A review by the Forward of the claims and counterclaims — and of the evidence for each — reveals a paucity of hard data that could make the case for the resolutions’ claims. Still, scholars and experts who monitor the issue report numerous anecdotes and experiences that leave them, almost uniformly, with an impression that the problem is real. Some of them also cite Israel’s cumbersome and sometimes arbitrary visa renewal regime for foreign academics working with Palestinian academic institutions in the West Bank as an equally serious problem.

To be sure, this is not how the Israeli Embassy to the United States sees the issue. “The State of Israel does not place any restrictions on the entry of academics from outside the country or on partnerships between academics and Palestinian institutions,” reads a general statement on Palestinian higher education posted to its website. “Academics from foreign countries can enter freely, except in cases of exceptional security concerns.” The embassy declined to answer further questions about the issue.

But supporters of the MLA resolution say the case against Israel’s travel policies for academics is clear. Supporting material submitted with the resolution includes articles about four educators denied entry to the West Bank, and a report (“Academia Undermined”) by Right To Enter, a Palestinian nongovernmental organization, describing the damaging effects of Israel’s entry policies on the quality of Palestinian higher education.

Opponents of the resolution have criticized the quality of this evidence. Russell Berman, a former MLA president and a leading critic of the resolution, termed it “woefully insufficient.” The Right To Enter report says that foreign academics are denied entry “widely, persistently and unaccountably.” But according to Berman, the interviews and anecdotes in the articles are no substitute for hard data.

“It’s really only the word of the opponents and the tendentious documentation,” he said.

Berman noted that three of the four entry denials cited in the articles describe incidents that occurred roughly five years ago. The only recent case presented is that of Nour Joudah, a Palestinian American teacher at Ramallah’s Quaker-affiliated Friends School who was twice denied entry to the West Bank in early 2013. (The Shin Bet, Israel’s security agency, said Joudah failed to comply with its questioning, a claim she denies.)

Nevertheless, several independent experts contacted by the Forward confirmed that the problem of foreign academics being denied entry is both real and serious. These experts spoke from experience, interviews and impressions, but did not cite any data, saying they had not undertaken a systematic study of the subject.

“It is clear to me from a wealth of anecdotal evidence that the restrictions on access and movement range from the cumbersome to the severe and do inhibit the operation of Palestinian academic institutions in the West Bank and Gaza,” said Nathan Brown, a George Washington University political science and international affairs professor and president of the Middle East Studies Association. Brown, who stressed that he was offering only his personal views and not those of MESA, added, “I have not seen any sign that academic institutions are specifically targeted, but the effects can still be quite serious.”

Robert Quinn, executive director of New York University’s Scholars at Risk Network, an organization that protects the rights of scholars worldwide, said that his “personal understanding” is that Israeli entry policies “have had serious negative impacts on higher education in the Palestinian territories.”

“Without taking a view on the reasons for such policies, or the motivations of those implementing them, there are real, negative impacts which Israel, as a responsible state, has an obligation to attempt to prevent or mitigate,” he said.

Bill Van Esveld, Human Rights Watch’s Israel representative, said foreigners of Palestinian descent — including academics — have faced the largest obstacles to entering the West Bank. “None of this is specific to academics,” he said. “But it does apply to academics of Palestinian background as it would to anyone.” Israel particularly restricts entry of ethnic Palestinian visitors because of fears that they will join activist groups in the West Bank or seek to settle permanently in the area, he said.

At the MLA’s Delegate Assembly, critics of the group’s Israel resolution passed out leaflets arguing that Israeli restrictions on foreign academics are actually quite rare. The leaflet cited figures on the Israeli Embassy’s website showing that only 142 out of about 626,000 Americans were denied entry to Israel in 2012, a rejection rate of about .023%. By contrast, the United States refused 5.4% of Israeli applications for comparable “B” tourist visas in 2012, leading the critics to conclude, “The United States has a much more restrictive practice than Israel in this regard.”

That’s “nonsensical and invalid,” said Charles Shamas, a Jerusalem-based human rights lawyer, referring to the .023% figure, as it does not break out how many of these visitors, like Chomsky, sought to enter the West Bank. Shamas, who helped assemble the Right To Enter report cited by the resolution’s backers, believes the rate of entry denials to the West Bank to be much higher. Additionally, “the 142 acknowledged cases involving U.S. citizens are part of a much larger number of cases involving foreign nationals,” Shamas said. (The MLA resolution, however, specifically condemns the treatment of academics from the United States.)

The Right To Enter report focused particular criticism on Israel’s practice of granting tourist visas for three months or less to visitors to the West Bank, including foreign academics. After three months the academics must reapply for a visa, which sometimes requires leaving and re-entering the country, and no guarantee that they will be allowed to return. Israeli entry policies are opaque and are often interpreted arbitrarily by border officials, according to Shamas and the report.

“You can’t imagine the psychological destruction that comes from leaving every three months and the expense that comes with it,” Roger Heacock, a history professor at Birzeit University, told Right To Enter. “We’ve been here 30 years, my family and me, but it’s been terrible. Really, it’s worn us down.”

According to Shamas, some academics know ahead of time that Israel will not renew their visas, so they simply depart the country, and might not be counted in the 142 people actually denied entry.

Critics of the MLA resolution argue that the renewal issue is blown far out of proportion. More than 90% of foreign academics’ renewal applications are approved, according to data posted on the Israeli Embassy’s website.

Shamas said that the renewal process — which he called “stressful and even Kafkaesque” — can deter academics from accepting positions in the West Bank in the first place. “They can’t tell if they will be permitted to complete their teaching contracts or their research,” Shamas said. “All of this makes it very difficult to recruit faculty, to plan academic terms.”

“Universities try to be cosmopolitan, and it doesn’t serve our students well that they are educated only by Palestinians,” Khalil Hindi, president of Birzeit University, told Right To Enter. “We’re thwarted in that effort of inculcating cosmopolitanism by the uniformity of our faculty.”

Critics of the MLA resolution say that, even supposing the worst, that’s hardly Israel’s fault alone. Their leaflet at the MLA cited a 2007 report by Education International that blamed the Palestinian Authority for restricting academic freedom.

Shamas lamented that the battle around the MLA resolution had become “a food fight” within the larger Palestinian-Israeli conflict. “My concern is that it not become stupidly polemicized,” Shamas said, referring to the specific issue of Israeli travel restrictions on scholars. “Unfortunately, things like this, when you raise them, they become a football.”

Israel Under Fire Over ‘Restrictions’ on Palestinian Academics — But What Is Truth?