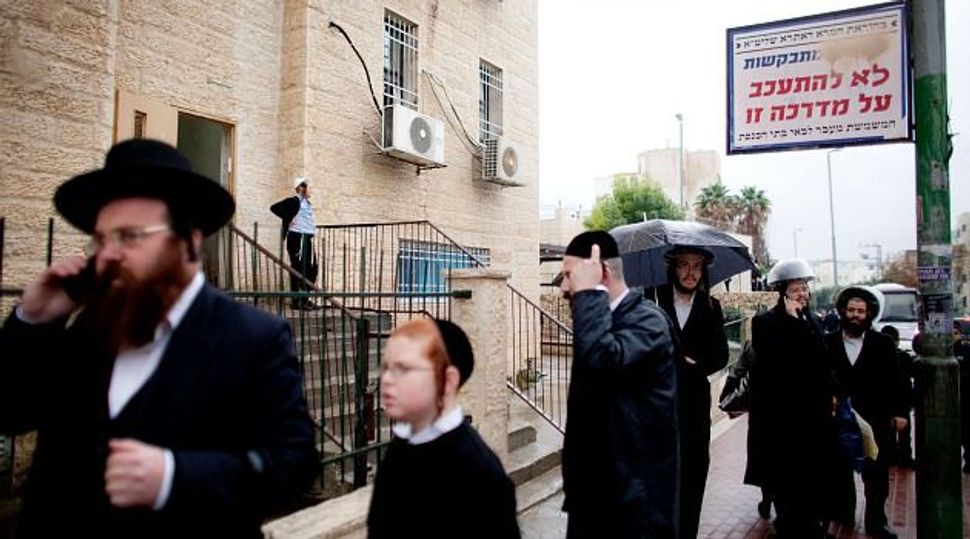 Beit Shemesh: A pessimist could call this city a vision of Israel’s future.

The ultra-Orthodox represent, by far, the fastest-growing demographic in the Jewish state, and government statisticians expect their numbers to increase by anywhere up to 700% in the next half-century.

Nobody knows what the full consequences will be if there is such rapid growth in a population that is at best ambivalent and at worse antagonistic to many of the secular values that lie at the foundation of the modern Jewish state. But some residents of the scandal-ridden and deeply divided city of Beit Shemesh think that their reality may provide a glimpse into what might come.

Tensions in Beit Shemesh, a city of about 100,000 people, 20 miles west of Jerusalem, have bred illegal activity, violence and even voter fraud. In late December 2013, a court nullified the result of October’s local election, which both sides of the city’s religious divide had fought as a battle over Beit Shemesh’s soul. The results gave a narrow victory to Moshe Abutbul, a Haredi politician whose spokesman boasted five years ago that Beit Shemesh would surpass the historic Orthodox stronghold of Bnei Brak and become a Haredi city second only to Jerusalem itself.

On election day, police raided two apartments where men in Haredi attire were gathered. They seized 180 identity cards, most of them belonging to Israelis who live abroad and were unaware that their IDs had been taken or duplicated.

A fifth of the cards had been used for illegal voting, and the rest were thought destined for that use. There was other purported misconduct, as well: The new ballot comes in response to a request by Attorney General Yehuda Weinstein, who cited allegations of widespread and systematic fraud in his appeal. Abutbul has appealed against the decision, so a new election is required.

To the secular mayoral candidate Eli Cohen, what is happening in Beit Shemesh is no less than a sidelining of basic civic values such as democracy and multiculturalism. “If at the end of the day we are not going to build a multicultural society and respect one another, this will happen in Safed, Rehovot, Kiryat Gat and other places,” he said.

Cohen’s suggestion that Beit Shemesh is a test case for multiculturalism in the country is more than rhetoric. The arrival of Haredim, who today represent almost half the local population, has been sudden. And there is strong reason to suggest that if successful coexistence following such an influx can work anywhere, it could work here. The non-Haredim of Beit Shemesh are almost all Modern-Orthodox or traditional Jews with reverence for religion, and the kind of secularism found in Tel Aviv is alien here. Today, just as when the city was established in 1950, there is hardly a shop open on the Sabbath and there are no calls for this to change.

But with Haredim teetering on becoming a majority in the city, some within their community want far more than the kind of traditional atmosphere that characterizes the place.

Next to a heavily-Haredi area, a partially built mall stands abandoned. Its development has been on hold for several years, following protests by Haredim who objected to the fact that it would bring non-Haredim, including women in modern attire, to “their” neighborhood. There are shops in Beit Shemesh where signs urge modest dress — and in some places signs are posted to loom large on the public sphere and mark out territory.

In one spot, a huge sign that Haredi activists mounted on a wall attempts to delineate turf and goes beyond requesting modesty. “Welcome to a Haredi neighborhood and shopping center,” it announces. Here women are “required” to dress modestly — and are given some specific directions on what this means.

Sometimes, sensitivities over dress have led to violence. There have been reports of self-appointed modesty police reprimanding women whose clothing they consider to be contrary to religious wear. In 2011 an 8-year-old girl was famously spat at because of her supposed immodesty. A few months later a Haredi man threw a stone at Nili Phillip, a 46-year-old patent attorney, when Phillip cycled in a religious neighborhood. “I was wearing cycling shorts and a cycling jersey with red — not acceptable dress in that community,” she recalled in an interview with the Forward.

Non-Haredim are furious that the signs have not been removed. They say that this points to a situation whereby the Haredi-run municipality is allowing Haredi activists to break the law to promote their ideology.

Phillip and three other women have turned to the courts to demand the removal of modesty signs. She believes that by not taking them down, the city “harbors an environment that is basically a green light for bullies to cause problems for women, and the city has done nothing to protect us.”

At the city council, Shmuel Greenberg, leader of the United Torah Judaism party and deputy mayor until the election was nullified, said that the hanging of a sign “doesn’t bother me and it doesn’t bother others.” However, he maintained that he is opposed to the signs on principle, and claimed that the municipality has removed all but one.

In his interview with the Forward, Greenberg placed the blame for this push toward more Haredi standards in the public sphere on hard-line “zealots” who he claimed number no more than 20 men. He said that he could have easily increased the Haredi character of the city, but he didn’t. “I’ve been in charge of transport for the last five years and could have decided to close this or that street on the Sabbath, but I have not and I don’t want to.”

Likewise, in the bureau of Greenberg’s ally Abutbul, who represents another Haredi party, Shas, there is denial of any push to make the public sphere more religious. Questioned by the Forward, Abutbul’s spokesman, Mati Rosenzweig, claimed that the politician’s comment about Beit Shemesh’s importance as a Haredi city pertained only to the number of Haredim it would accommodate, not to the ratio of Haredim to others or to the city’s character.

Out on the streets, Greenberg’s contention that only one sign remains is patently untrue. Some of his supporters insist that the signs are legitimate, while the imposed Haredi-ization of public space is shown to go deeper than 20 individuals. And there is something that grates with the non-Haredi public even more than Sabbath road closures would — an attempt to create a frum, devout, sidewalk.

On a street with two large kollels, talmudic institutes, that have dozens of students between them, signs mounted on lampposts ask women to cross the road to allow a few yards of sidewalk to be for male-only use. A teacher from one of the kollels — a hard-liner who refuses to vote in elections because he wants nothing to do with the State of Israel — told the Forward that the idea is that men studying there will not need to see or encounter women. “Of course it’s right,” insisted the teacher, who spoke on condition of anonymity. “People need to understand our outlook and their place in the world.”

For this man, who is in his 20s, the multiculturalism that Cohen believes hangs in the balance was never an option. Asked about the gulf between the Haredi and non-Haredi populations, he said: “It’s not a problem, it’s a good thing. We need separation.”

There are many Beit Shemesh Haredim who take a very different view, enjoy good relations with their non-Haredi counterparts and hope for coexistence. “We have a good chance to live together; people just need to calm down a little,” said Rafael Perlman, 52, a Haredi real estate broker.

But the questions still to be answered are what is the strength of the more extremist Haredim and to what extent will they set the tone in the city? Avrohom Leventhal, a rabbi who describes himself as occupying the line between the Haredi and the Modern Orthodox community, said that while he believes the extremists to be in a small minority, the reticence of rabbis and politicians to stand up to them means that they wield strength far beyond their numbers.

“The problem is anyone who tolerates it — anyone that approves it with their silence,” said Leventhal, director of a local charity and candidate for council with a moderate religious party.

Leventhal believes that the correct leadership can rein in the extremists, but some Beit Shemesh old-timers say that the past few years have brought them to the same conclusion as the teacher from the kollel. Max Rodriges, a 44-year-old native of the city who works in transport, said: “Build them separate towns; it’s the only answer. The average Haredi can’t live with people who are different, because of their way of life.”

Broadening his comments to the national Israeli context, Rodriges commented: “In reality it’s not possible to work together. Here’s the classic example: We’re 20 years together, and then it explodes.”