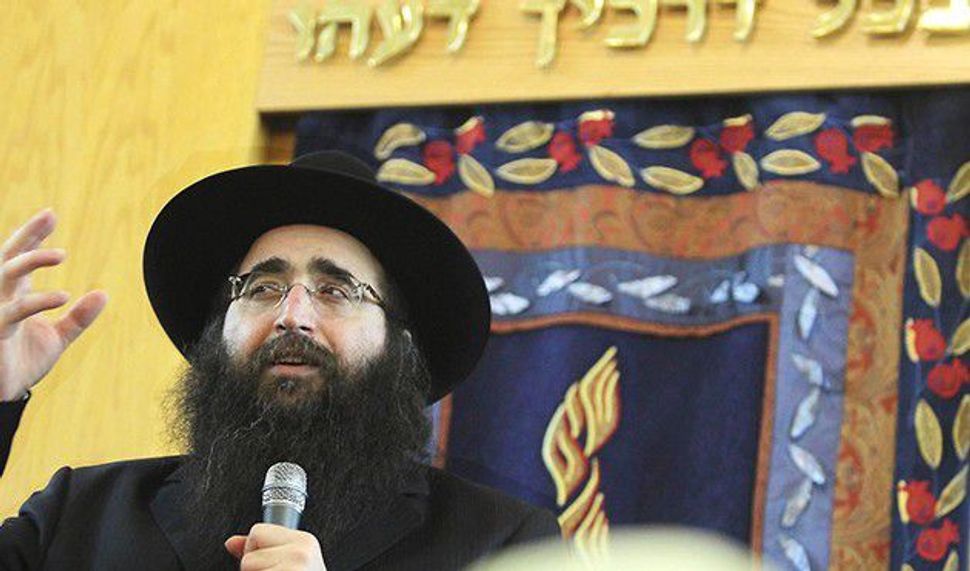 The officer, Detective Eric Patino, allegedly said he would release the rival, an Israeli businessman named Tomer Shohat, if Shohat gave him a computer containing information he had gathered on alleged misconduct by Ben Zion Suky, Pinto’s right-hand man.

Pinto, a powerful Israeli rabbi, is at the center of an unrelated scandal that’s made headlines in Israel in recent weeks. Haaretz reported on February 21 that authorities are preparing to indict Pinto on charges of bribing and threatening Israeli police.

The New York civil suit stems from a conflict over a Manhattan apartment building at 440 West 41st Street that was owned, in part, by a company controlled by Suky. The Forward reported in 2011 that Suky was a former pornography distributor with multiple legal entanglements related to his real estate investments.

The defendants have yet to file a response to the allegations. They do not appear to have obtained representation in the matter. Ben Zion Suky did not respond to a message left on his voicemail. Eric Patino could not be reached at a listed number. The phone at Pinto’s New York synagogue appeared to be off the hook. The NYPD also did not respond to a request for comment on the lawsuit.

Shohat’s attorney, David Jaroslawicz, said that Shohat, 31, is a former Israel hedge fund manager tasked with recovering a $10.5 million investment that he and others had made in the 440 West 41st Street building.

According to Shohat’s complaint, the company that owned the building, Metro Apartments, had failed to make payments on loans extended by Shohat’s group. Shohat suspected that funds were being misappropriated, so he traveled to the United States from Israel to inspect Metro’s books. Upon arrival, Shohat allegedly discovered that Suky was misappropriating company funds and mismanaging the property.

Shohat allegedly brought his findings to Pinto, who asked Shohat not to report them to the police. Later, according to the complaint, Pinto and Suky threatened to have Shohat injured or to have him arrested by Patino if he continued to investigate irregularities at the building.

When Shohat continued his investigation and reported his findings to the Metro board, he was allegedly threatened again, this time by Pinto’s brother, Menachem Pinto, who is also a defendant in the suit. Suky then accused Shohat of theft and, according to complaint, Pinto and Suky “arranged for…Patino to arrest [Shohat] and charge him with crimes he had not committed.”

Shohat was arrested February 21, 2013. According to the complaint, Patino first told Shohat he would be let go if they could eat lunch together and talk. Later, after Shohat’s attorney had come and gone, Patino allegedly told Shohat that he would let him go if he gave Patino his computer, which contained data about the Metro Apartments investigation.

Following the arrest, Patino filed a felony complaint against Shohat accusing him of stealing $15,000 from a locked petty cash container at 440 West 41st Street. The D.A.’s office filed a motion to dismiss the charges in April.

Patino works both as an NYPD detective and a real estate agent with a commercial real estate brokerage called the Azad Propety Group, according to his LinkedIn profile. Azad Property Group does not have a listed phone number.

The Forward reported in March 2011 on questions about the management of Pinto’s U.S. charities, including the fact that Pinto’s $6.5 million Manhattan townhouse was under foreclosure. In December 2011, the Forward reported that Pinto’s charity had spent tens of thousands of dollars on luxury travel and jewelry. Those expenditures included a $75,000 bill for a stay at a fancy Buenos Aires hotel.

The New York Times published a story in December 2011 painting Pinto as the victim of a “bizarre embezzlement and extortion plot” and reported that the FBI and the US Attorney’s office were investigating former Pinto associates in connection to the alleged extortion.

One of those former associates, and Israeli national named Ofer Biton, has since pled guilty to visa fraud. Biton is reportedly under investigation in connection to money he raised from Pinto supporters for the 2010 congressional campaign of Staten Island congressman Michael Grimm.

Still, more than two years later, no charges have been filed in the embezzlement plot described in the Times story.

Instead, it is Pinto and his associates who have been the subject of a handful of criminal inquiries.

On February 12, Haaretz reported that Israeli officials were on the brink of indicting Abraham Israel, the founder of a Pinto-linked charity, for mismanaging the charity. Though the charity claimed in financial statements to distribute 33 million NIS annually, investigators found that it distributed just 6 million NIS each year.

In October 2012, Pinto and his wife were placed under house arrest in connection to the same bribery case.