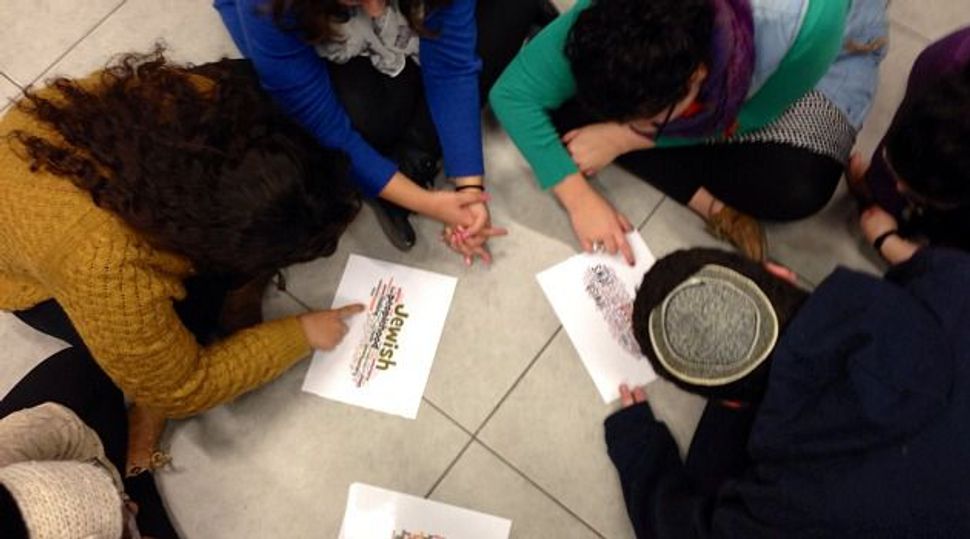 Thousands of students from around the world head to Israel every year to discover the country and its culture. And what do they learn? “In general, Israel education is about falafel, geography and one directional learning about Israelis,” quipped Shana Zionts, director of student life at Columbia/Barnard Hillel.

This winter, a delegation of young adults, most of them students, spent two weeks in Israel in search of something different. During a visit to Kibbutz Maagan Michael, near Hadera, Zionts, one of the delegation’s leaders, explained, “We’re looking for an intense exchange.”

About 40 people from Germany, America and Israel travelled around Israel, holding marathon discussions on the meaning of Jewish community and the connections between Jews of different nationalities.

They are enrolled in a study program called Student Leadership for Jewish Peoplehood – Building Global Connections. Until recently, the program was limited to Germans and Israelis, but in the fall it took its first Americans.

Funded by the Jewish Agency for Israel and UJA-Federation of New York, the leadership program is a partnership between Israel’s Oranim Academic College, the Central Welfare Office of the Jews in Germany and Columbia/Barnard Hillel. It was a chance to deepen their ideas on Jewish “peoplehood,” discuss what unites and divides them, and be inspired by each other. The Jewish Agency estimates that 45,000 to 50,000 Americans under the age of 30 visit Israel on organized programs each year.

“Peoplehood,” according to Micha Balf, a lecturer at Oranim and one of the trip’s organizers, describes the sense of kinship that Jews feel toward each other regardless of nationally or their specific religious denomination. “My expectations for assistance and understanding from other Jews stem from that amorphous sense of Jewish peoplehood,” he said. Balf thinks that “peoplehood” sums up the sense that Jews “have a sense of mutuality, we have some sense of collective responsibility and we have a certain literacy in Jewish ritual, knowledge and culture.”

The itinerary for the trip focused heavily on educational settings. The participants observed a “social activism” class at Mavuot Iron High School at Kibbutz Ein Shemer, visited a mixed Jewish-Arab school near Hadera, and spoke to new immigrants to Israel from the former Soviet Union. They also met with members of the interdenominational feminist group Women of the Wall and went to south Tel Aviv, where they talked to illegal immigrants from Sudan and Eritrea.

And they were inspired. “To the Germans, you’re not this or that kind of Jew, but just a Jew,” said 19-year-old Deborah Pollack from Manhattan, a member of the Conservative movement. “I think I sometimes get way too caught up in my movement and this encounter gives me a whole new outlook and a wider focus.”

But while Pollack and some of the other Americans find that diversity of the Jewish community in the U.S. can breed sectarianism, several of the Germans and Israelis said they would like to import more of the American spirit of diversity. Mikhail Begel, a 25-year-old from Nuremberg, said that the pluralism of the American Jewish community is “an example we can try to recreate.”

Oleg Warschawskij, 32, from Wuppertal, added: “It’s interesting to see the range of ‘being Jewish’ in America, which is very wide in their group. In Germany, I wouldn’t exaggerate to say it’s black and white — it’s Orthodox or traditional.” Sharon Amor, a 24-year-old Israeli from Karmiel, said that the variety found in American Judaism would be a welcome addition to Israeli society.

Speaking to the Forward after the seminar, Roberta Bell-Kligler, director of Oranim College’s Department for Jewish Peoplehood, said: “The idea of Jewish peoplehood really came alive for the participants — it was theoretical for them until now.”

Conversations during the seminar brought some surprises — and on at least one occasion challenged conventional views about Israel. . The Israelis encountered by Diaspora Jews are typically thought of as leaders, promoting the centrality of Israel to Jewish life. But during this trip, it was a different story.

Marianna Brick, a 31-year-old from Hanover, participated in a session during which people brainstormed words with a Jewish connection. “The Israelis didn’t list the word ‘Israel’ when they described what it is to be a Jewish leader,” she said. “For us, Israel has a part, so it’s valuable for them to see the importance we place on Israel.” Interestingly, in this brainstorm exercise, only Americans proposed the word “community.”

The seminar participants interrelated their stories with each other’s in sometimes-surprising ways. Begel said: “One [Israeli] said that his family boycotts everything from Germany because of the Holocaust and [asked], ‘How can you live there?’ For me and many others, it’s like a new start, a new beginning.

“If I have a German friend, maybe his grandfather was in the SS, but it’s not connected to us any more,” he said.” In his view, if Germany can heal from its haunted past, perhaps there is a chance for Israelis and Palestinians to one day reach a real peace. “It just needs time post-conflict, and at some point people will be able to move on and forgive.”

Amor, the Israeli from Karmiel, said that she learned a lot from the German participants, especially their commitment to Jewish history and Jewish “pride” — but was less sanguine about the Israeli-Palestine connection. “It’s really easy to say that when you’re not living in Israel,” she said.

The challenge now that participants have returned home, according to Balf, is to find ways for their communities to benefit from their exchanges. “The next step is to see how we can find ways to take graduates of this program and further their communal involvement,” he said. “We don’t just see this as investment in an experience but rather in starting a journey for the people involved.”