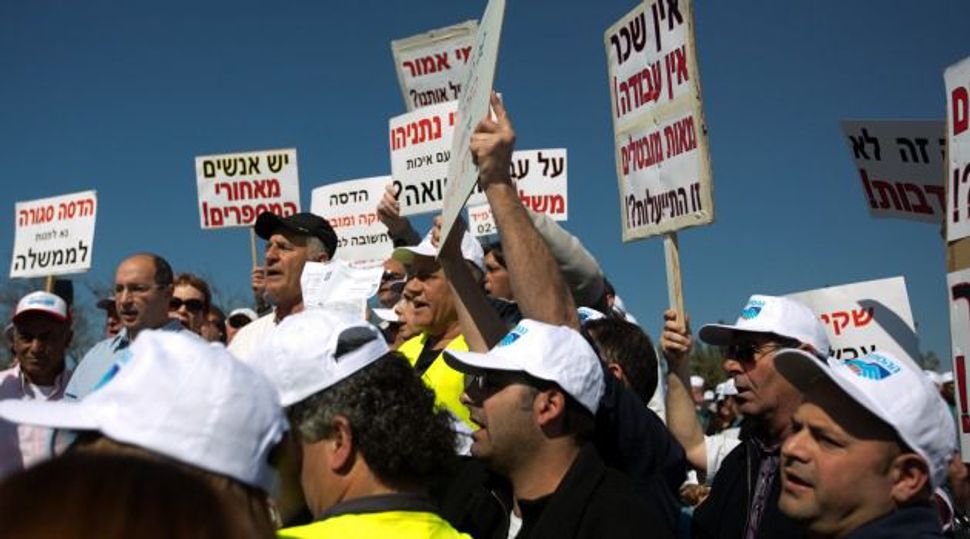 On Strike: Workers at Hadassah Medical Center strike amid a fiscal crisis at the hospital. Image by getty images

Opened in late 2012 at a total cost of $363 million, the tower is the largest building project undertaken at Hadassah in 50 years and a symbol of the hospital’s ambitions for the future.

Now that future is in peril as the hospital, saddled with nearly $370 million in debt and an annual deficit exceeding $85 million, struggles to chart a course back to solvency.

Last month, Hadassah hospital declared bankruptcy after two large Israeli banks cut off its credit lines. The Jerusalem District Court gave the hospital a 90-day stay of protection from creditors, after which the medical organization will be restructured or liquidated.

Both the Israeli government and the Hadassah Women’s Zionist Organization of America, which built the hospital and partially funds it, have agreed to provide $14 million in emergency funding to help weather the crisis. Amid the financial tumult, the hospital staff went on strike for two weeks.

“This is a crisis that had its origins a long time ago,” said Avigdor Kaplan, who became the hospital’s director-general last year. “Now it’s gotten to a point where it can’t go on.”

Founded in 1939, Hadassah is widely regarded as one of Israel’s finest health care facilities, pushing the boundaries of medical research while providing first-rate treatment not only for Israelis, but often for patients from around the Middle East, including citizens of countries technically in a state of war with the Jewish state.

The institution, which employs 6,000 people and doubles as the main teaching hospital for the Hebrew University medical school, is a symbol of both the best in Israeli medicine and the American Jewish contribution to building the state.

But with the budgetary woes impossible to ignore any longer, rifts have opened among the hospital, the Israeli government and the women’s organization. All the parties agree that the hospital must change the way it does business, but they remain divided on the source of the crisis, who is at fault and how best to move forward.

The government has pointed to employee salaries, which it says are “significantly higher” than typical pay at Israeli hospitals. The women’s organization blames long-term financial mismanagement, describing hospital administrators as children who expect that someone will always be there to bail them out. Hospital officials blame government regulations that they say penalize them for providing the country’s best care.

Diagnosing the problem will be critical to the hospital’s recovery, but no explanation has been complete. Soon after a Feb. 11 Knesset committee hearing on the crisis, the health and finance ministries appointed a joint panel to investigate. Recommendations are expected to be released this month.

In Kaplan’s view, the hospital’s problems stem from a bad deal the hospital was pressured into reaching with Israel’s government-funded health insurance companies. Israeli hospitals typically give volume discounts to the companies in an effort to attract more business, but Hadassah’s appear to be larger than the average.

In 2013, the hospital gave the insurance companies an average discount of 26 percent. A 2010 government report found that the nationwide average that year was 18 percent.

According to Kaplan, the arrangement effectively penalizes Hadassah for performing more complex and expensive procedures. As a private hospital, Kaplan said Hadassah also covers employee pensions and malpractice insurance that at public hospitals are paid for by the government.

“The government didn’t take care of us as it should have,” Kaplan said. “They gave overly large discounts to the providers, even though we give the same kind of service to Israelis.”

The women’s organization funds nearly all of the hospital’s research and development budget, including $250 million toward the construction of the Davidson tower. It funds 4 percent of the hospital’s daily operations budget, and over the years also has stepped in to cover deficits in the $570 million operating budget.

The 2008 recession and the Bernard Madoff Ponzi scheme, which cost the women’s organization tens of millions of dollars, hurt the group’s ability to funnel large sums to the hospital.

Goldstein told JTA that the women’s organization has appointed a representative to attend hospital board meetings in an effort to exercise greater oversight. But she also acknowledged that the organization’s willingness to make up for past budgetary shortfalls contributed to the current crisis.

“They always think we’ll always come through,” Goldstein said. “There were many times when a director-general called and said, ‘Maccabi owes us 20 million, can we borrow it from you?’ It’s like loaning money to kids.”

Unlike his predecessors, Kaplan is not a physician. He holds a doctorate in medical administration and previously served as the CEO of Israel Aircraft Industries. He told JTA that the key to resolving the crisis is cutting staff and salaries.

Goldstein predicted that Kaplan will have the hospital on a sound financial footing within five years. Hospital staffers understand that cuts will be a necessary part of the restructuring, she said.

“I don’t think they’ll strike again,” Goldstein said. “Either they’re going to survive and move forward, or there’s going to be nothing.”