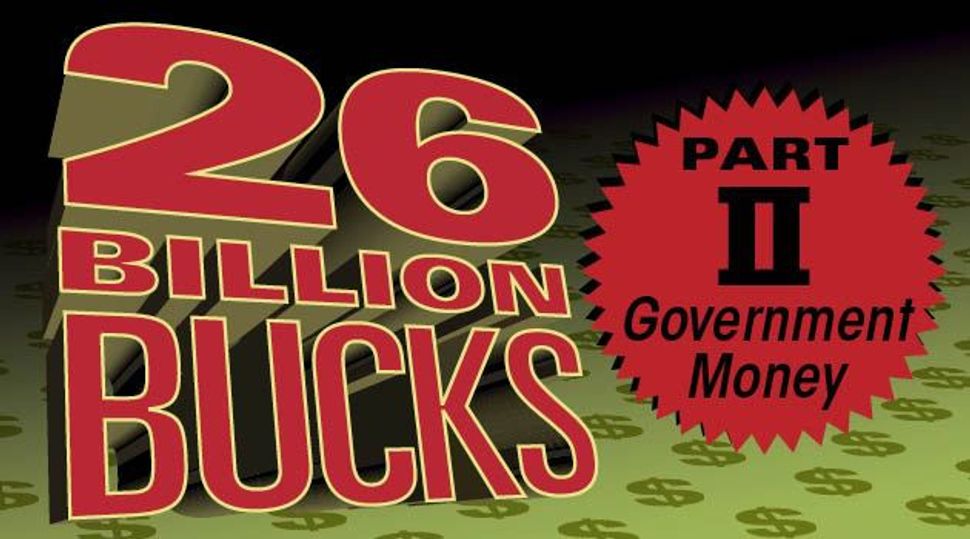 How can Jewish charities afford to spend so much money on Israel?

It doesn’t hurt that federal, state and local governments in the United States spend billions subsidizing many of the other things the charities do.

Israel-related not-for-profit organizations get more contributions than any other type of Jewish agency, as the Forward reported last week. Now, new data from the Forward’s ongoing investigation into the finances of 3,600 Jewish tax-exempt groups show that donors alone don’t come close to paying for today’s sprawling charitable apparatus.

While philanthropists enjoy the prominence that comes with seats on the boards of charities and buildings named after them, they are actually just a small part of the total Jewish funding picture. As the plurality of their charity dollars go to Israel-related causes, health care and social service groups subsist largely on government grants and contracts.

“They are the government’s delivery system,” said Jeffrey Solomon, president of the Andrea and Charles Bronfman Philanthropies, of the community’s human services agencies. 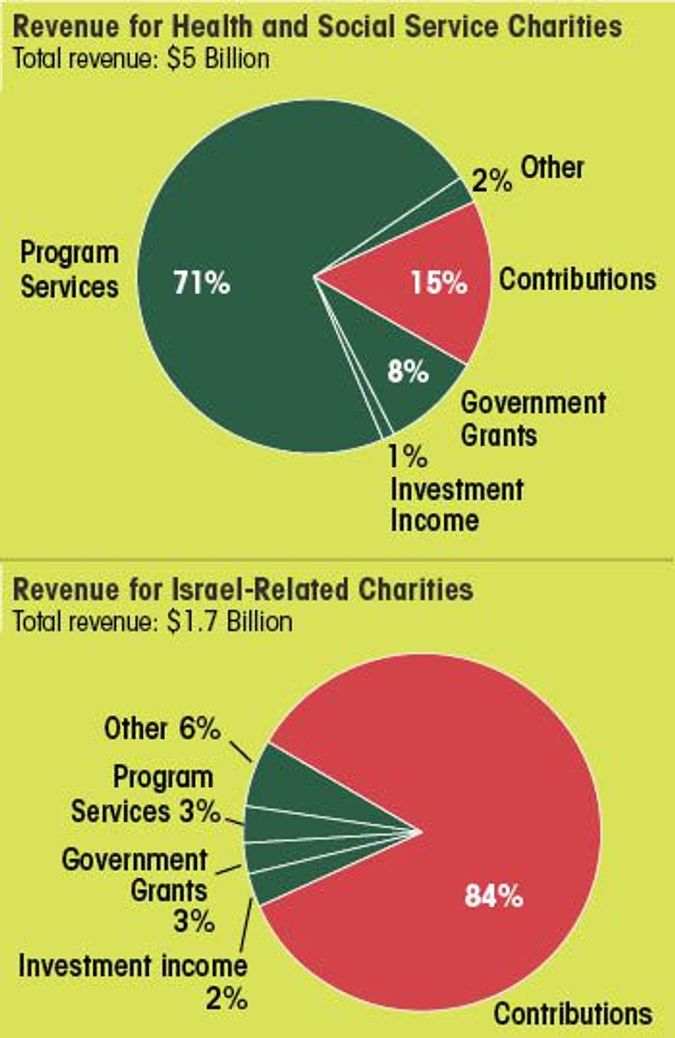 Jewish families, too, bear some of the burden, paying often-substantial fees to health care agencies and tuitions to day schools and summer camps.

Charitable contributions represent just 36% of the total revenue of Jewish not-for-profit groups. Meanwhile, 48% of the network’s revenue comes from program fees — a category that includes government contracts, payments from Medicare and Medicaid, and fees paid by those actually using the services in question. Another 7% of the revenue comes from outright government grants.

These statistics come from the Forward’s newly compiled database of financial information from Jewish charities that filed with the IRS in the 2012 calendar year. Most synagogues and rabbinical seminaries do not file with the IRS and are not included. A description of the Forward’s methodology in building its database is available online.

Given the uncertainty as to how much Jewish charities grant to other Jewish charities, the Forward used a low estimate for total contributions received in a year — $4.6 billion — to calculate the proportion of revenue that came from each source.

The vast waves of government funds sweeping through the Jewish charity network have reshaped the Jewish community’s charitable institutions.

Decades ago, a handful of Jewish social service and health care agencies in New York City relied almost entirely on UJA-Federation of New York to pay for their activities. “There was a point in time when the Federation provided a majority of the funding for some of these organizations,” said Ron Soloway, the New York federation’s managing director of government relations.

Now, some of these agencies are bigger than the federation itself, grown huge on government dollars. “With the advent of Medicaid and Medicare in the 1960s, much more government revenue became available to help the poor, the vulnerable,” Soloway said. “The organizations have grown appreciably.”

Jewish groups also receive $6 billion a year in program fees, a figure that includes contracts from government agencies and payments from federal, state and local programs. These government funds are not separated in the data from money that comes from those using the services in question. But according to data from the Urban Institute’s National Center for Charitable Statistics, a third of the program fees going to all tax-exempt groups comes from government. If that proportion holds true for Jewish groups, that would mean that Jewish groups get $2 billion a year in government payments for program services.

Jewish families also pay a large portion of these program fees, in the form of tuition to day schools and summer camps, and in fees not covered by Medicare or Medicaid assessed by Jewish nursing homes and health care institutions. Leaving aside the major universities, education organizations in the Jewish tax-exempt network take in $790 million in program fees a year, much of it in tuition paid to large day schools like the Abraham Joshua Heschel School in New York and the Charles E. Smith Jewish Day School in Rockville, Md. 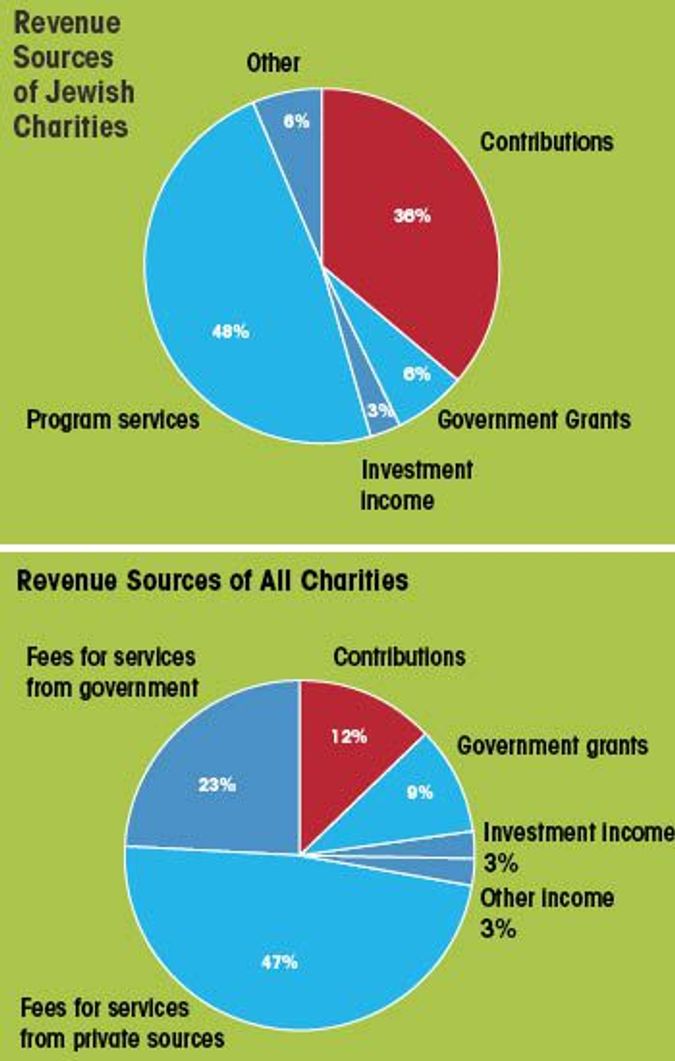 The largest overall recipients of program fees are Yeshiva and Brandeis universities, followed by a swath of social service groups that are network agencies of the UJA-Federation of New York: Beth Abraham Health Services, Metropolitan Jewish Home Care and FEGS.

These groups still get money from UJA-Federation, and some still raise millions a year from donors on their own. But the effect of the large-scale government subsidies granted to Jewish health care and social service groups over the years has been to free the Jewish funding apparatus of much of the financial burden those groups represent.

As the Forward reported last week, 38% of contributions to non-federation-type Jewish groups now go to Israel-related causes — the largest single category. Health care and social service groups get 20%. Education groups also get 20%, or just 16% after excluding Brandeis and Yeshiva universities, which are devoted primarily to secular, rather than Jewish education.

Though donors supply only a third of Jewish groups’ revenue, that’s actually a lot compared with the tax-exempt universe at large.

According to NCCS data, 13% of the revenue reported by tax-exempt groups in 2011 came from donors. That’s far less than the Jewish groups’ 36%.

It’s hard to know whether that means Jewish groups are actually raising more from private donors than other groups are. Different kinds of tax-exempt organizations operate under vastly different revenue structures, with hospitals earning most of their income through program fees and cultural organizations relying more heavily on donations. Massive not-for-profit hospitals likely skew the overall numbers.

Religious charities as a whole seem to rely more on donations than secular charities do. In a study of large evangelical not-for-profits, Saint John’s University professor Christopher Scheitle found even higher levels of reliance on donations than among the Jewish groups in the Forward’s investigation.

Still, some experts argued that the Forward’s findings could indicate that Jews are giving at high levels. “We have been seeing for quite a while a decline in Jewish support for Jewish charities,” said Leslie Lenkowsky, a professor at Indiana University’s School of Public & Environmental Affairs. The 36%, Lenkowsky said, suggested that Jewish giving is still relatively strong.

Jewish groups receive between $4.5 billion and $6.5 billion in private donor contributions each year. Even some of this money can be seen as a form of indirect government subsidy.

Under current United States tax law, taxpayers are entitled to a deduction for every charitable dollar they give. Depending on an individual donor’s income, up to 39.6% of the value of a gift to a tax-exempt entity can be deducted from his or her tax bill, up to a certain limit.

It’s impossible to calculate the cost in lost tax revenue reflected by the billions in contributions reported each year, though the figure could be as much as a billion dollars.

Given the presumably massive size of this deduction and the role that private contributions play in the total revenue of Jewish charities, Jewish groups see themselves as having a major stake in maintaining the charitable tax deduction.

Various proposals have sought in recent years to limit charitable tax deductions. This February, the chairman of the House Committee on Ways & Means proposed one such limit. Opponents of the deduction argue that it doesn’t play a large role in incentivizing donors to charities and that it benefits wealthy donors more than less-wealthy donors.

“I think all entities in the charitable sector, large and small, equally view proposals to reduce the charitable deduction as threatening,” Diament said.

William Daroff, director of the Washington office of the Jewish Federations of North America, agreed. “We work very closely with the United Way and the Red Cross and the Salvation Army, and with Catholic Charities, and with all sorts of other philanthropic organizations that are equally aghast at proposals that would reduce the deductibility of charitable contributions,” Daroff said.

NEXT WEEK: Galas. Gambling. High salaries. How much does the infrastructure of the Jewish charitable network cost?