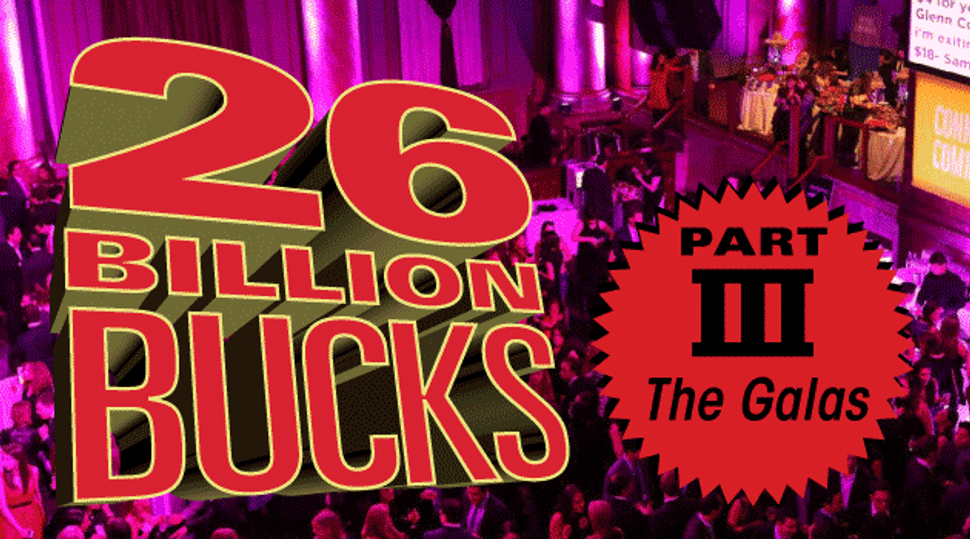 How do Jewish charities spend almost $100 million a year on parties?

It starts with a sushi spread for a couple hundred people and a full open bar in the Cotillion Room at The Pierre, on Fifth Avenue in Manhattan. Then a waiter in a tux rings a bell, and everyone parades into the grand ballroom where they eat a three-course chicken dinner and ignore the elaborate video presentation.

A celebrity guest, perhaps Dr. Ruth or Elie Wiesel, might say a few words. At the end of the night, hundreds of fat programs printed on heavy stock are forgotten on the floor.

Some weeks, there’s a Jewish charity gala every evening at The Pierre or the Waldorf-Astoria or The Plaza. That costs a lot of money. The Forward’s ongoing investigation into the financial data of 3,600 Jewish charities has found that groups report spending $95 million a year on fundraising events.

That includes $5.6 million spent by UJAFederation of New York alone, the biggest spender, and $4.9 million spent by the Anti-Defamation League. Sixteen organizations in the Forward’s database spent more than $1 million in a year on fundraising events; 200 groups spend more than $100,000 a year.

Despite the extravagance, the events bring in real money for some charities. UJA-Federation brings in around $50 million a year on the $5 million it spends on events, according to Mark Medin, the group’s senior vice president. “From our perspective, number one, fundraising galas, fundraising events, are very lucrative ways to raise money,” Medin said.

Most groups don’t raise as much as UJA-Federation, though many rely heavily on fundraising at events. Event income alone for all groups taken together comes to $139 million — and that doesn’t include donations made through the events.

Still, the $95 million represents a huge outlay of charitable dollars. The 15 groups that spend the most on fundraising events in a year paid $34 million all together — more than the combined total expenses of the 1,025 smallest Jewish groups.

Despite the costs of the galas, the people who put them on defend them as fundraising tools and as ways to connect with donors.

“We believe that we’re building, developing, strengthening our community,” said Rachel Sternberg, senior vice president of the Jewish United Fund/Jewish Federation of Metropolitan Chicago, which spent $1.2 million on fundraising events in 2011. “We don’t only use them in one way.”

If Jewish galas feel old-fashioned, there’s a reason: Jewish charities have been holding them for more than a century.

The first modern Jewish fundraising gala may have been a banquet held in 1849 in New York City, according to Jonathan Sarna, a professor of Jewish studies at Brandeis University. The Hebrew Benevolent Society, a Jewish umbrella fundraising group, held the gala with a related group called the German Hebrew Benevolent Society. Daniel Webster, the famous antebellum Massachusetts senator, sent a letter regretting his absence.

Mordecai Noah, who ran the Hebrew Benevolent Society, had hit upon a fertile blend of charity and extravagance. “Noah understood that charity is not just about altruism,” said Sarna, who has written a biography of Noah. “It’s also intertwined with status and honor.”

Galas thrive on a competitive approach to philanthropy, encouraged by charities and their backers. Until 15 years ago, it was standard practice at Jewish galas for hosts to call out individual attendees by name in front of the entire ballroom and ask how much they would pledge. This practice is now considered gauche, but modified versions are still common. At a Friends of the IDF event in March 2013, names weren’t called, but attractive women carried microphones to attendees who volunteered to stand up and announce their gifts.

Today, galas continue to give the wealthiest members of the community other, subtler ways to exhibit their wealth. Bigger gifts buy bigger advertisements in gala programs. And the wealthiest donors win the biggest items at the charity auctions that sometimes accompany the galas.

“It’s conspicuous consumption, no doubt about it,” Sarna said. “There’s subtle pressure. The Jewish philanthropy from very old times assumed that the wealthiest would set the standard.”

Jewish galas haven’t survived a century and a half just because they let the rich show off. Charity officials continue to believe that these galas bring in donations that wouldn’t come otherwise.

Some people just like going to parties, according to Medin. But much of the $50 million that UJA raises each year comes from attendees looking to show respect to, and make connections with, the people that the galas honor. In December 2013, a UJA gala for Goldman Sachs chairman and CEO Lloyd Blankfein raised $26 million from donors looking to honor the Wall Street king.

“If you didn’t have the event, they wouldn’t be making the gift,” Medin said.

There are other, less apparent social functions, too. Galas can be fun, as the photos in the New York Times’ society page try to show each week. And they give the charities an opportunity to explain their work to donors.

“It’s a very important way to educate both your constituency and the broader community about the work that you do,” Medin said. “We have between 25,000 and 30,000 [people] a year that attend our different galas and events.”

At JUF, programs at galas focus increasingly on describing the federation’s work. “We spend a lot of time thinking about what we want to happen in that room and what we want to expose our donors to,” Sternberg said.

Other federations, however, have grown wary of big galas. “Most Jewish organizations are still highly dependent on a major fundraising event,” said Jay Sanderson, president and CEO of the Jewish Federation of Greater Los Angeles. “They spend a lot of money and staff time. We’re moving away from that model.”

Sanderson’s federation still spent $1.1 million on fundraising events in its 2011 fiscal year — 2% of its total expenditures. But Sanderson said that his group thinks of its galas as “thank you” parties for big donors, not as a place to make a fundraising “ask.” His federation has pushed alternative events, like a fundraising bike ride.

“Donors need to understand where the money’s going,” he said. “We can only do that by spending real time with donors.”

End of the Party?

At the New York and Chicago federations, there’s no sense that extravagant galas are in decline.

“In New York, fundraising galas are still a very important part of what we do,” Medin said. “Every city is different.”

What’s been most remarkable about galas is their universal appeal. “The gala dinner seems to be one of the few things that transcend denomination and organization: Every American Jewish institution — synagogues, landsmanshaften day schools, benevolent and charitable societies — made a point of mounting one,” said Jenna Weissman Joselit, professor of history at the George Washington University and monthly columnist for the Forward.

Carmel Chiswick, a professor of economics at the George Washington University, noted that galas were most popular in the 1950s and ’60s, and not only among Jews. As large umbrella organizations like federations decline, along with people’s connections to them, big galas may fade away, Chiswick said.

“The era of the umbrella organization has really declined, and they’re the ones that really benefit from the galas,” Chiswick said. “If you’re going to give to three organizations and you know what they are, then you give to them. You don’t need a gala.”

NEXT STEP: Tell the Forward how you believe Jewish charitable dollars should be spent. Click here to take our poll. We will publish the results later this week.