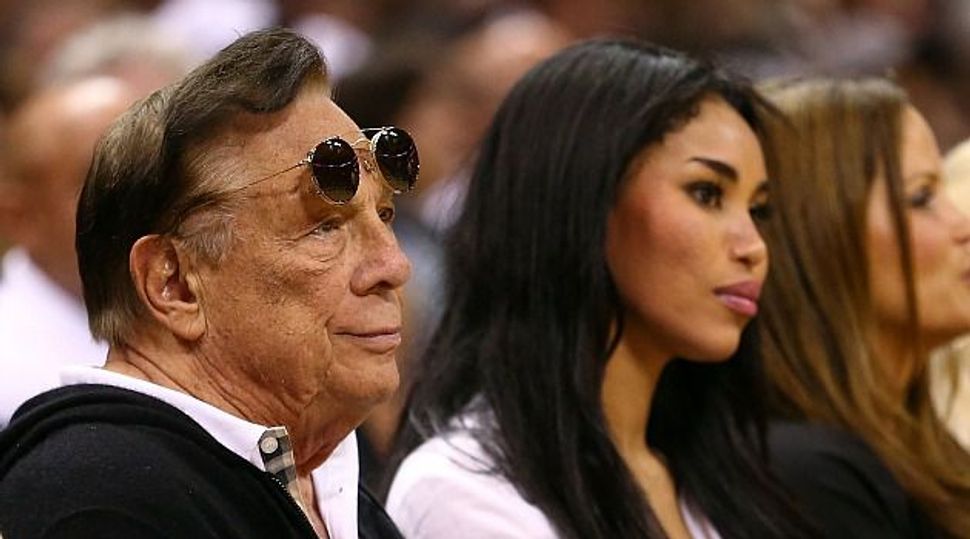 In a newly released audiotape of Los Angeles Clippers owner Donald Sterling’s notorious racist remarks to his girlfriend, he seems to justify his views of African-Americans by noting how in Israel “the blacks are just treated like dogs.”

In the original, shorter tape released Friday by the TMZ website, which has caused a storm in the United States, Sterling is heard at a game complaining to his black-Mexican girlfriend, V. Stiviano, after seeing that she’d posted Instagrams of herself with black former basketball star Magic Johnson. “Don’t bring black people” to the Clippers games, he tells her. “It bothers me a lot that you want to broadcast that you’re associating with black people. Do you have to?”

In the new, 15-minute tape released Sunday by the U.S. website Deadspin, Sterling, 80, is heard telling Stiviano, 38, “You think I’m a racist …” which Stiviano denies. He insists that that’s what she thinks, that he has an “evil heart,” to which she replies, “I don’t think so. I think you have an amazing heart, honey, I think the people around you have poison mind, and have a way of thinking.”

At that point Sterling – born to American Jewish immigrant parents as Donald Tokowitz – seemingly tries to defend his views by putting them in an international context, singling out how blacks are treated in Israel.

Sterling: “It’s the world! You go to Israel, the blacks are just treated like dogs.”

Stiviano: “So you have to treat them like that too?”

Sterling: “The white Jews, there’s white Jews and black Jews, do you understand?”

Stiviano: “Are are the black Jews less than the white Jews?”

Stiviano: “And is that right?”

Sterling: “It isn’t a question – we don’t evaluate what’s right and wrong, we live in a society. We live in a culture. We have to live within that culture.”

Soon Stiviano brings up the Holocaust, and Sterling seems to get upset. She says she would never tell a person that she wasn’t bringing them to a game because of their “race or color or culture.” Then she adds, “It’s like saying, ‘Let’s just persecute and kill all of the Jews.’”

Stiviano: “Isn’t it wrong? Wasn’t it wrong then? With the Holocaust? And you’re Jewish, you understand discrimination.”

Sterling: “There’s no racism here. If you don’t want to be … walking … into a basketball game with a certain … person, is that racism?”

Deadspin said it did not know if the tape had been altered, which TMZ also noted after publishing the original, shorter version.

Sterling’s remarks have caused outrage across in the United States, with even President Barack Obama weighing in. “When ignorant folks want to advertise their ignorance, you don’t really have to do anything, you just let them talk,” the president said earlier Sunday.

Los Angeles Clippers players staged a protest at a playoff game on Sunday against racist comments allegedly made by team owner Donald Sterling, turning their warm-up jerseys inside-out to hide the team name before a loss to the Golden State Warriors.

The silent demonstration came as Sterling faced a firestorm of criticism over a 10-minute recording obtained by celebrity news website TMZ in which a man reported to be the NBA owner tells a woman not to post photographs of herself with black people online and not to bring African-Americans to Clippers games.

The taped remarks rocked the National Basketball Association (NBA), where most of the players are black, and left its officials scrambling to address the scandal that has threatened to overshadow the playoffs.

Ahead of the game against the Golden State Warriors in Oakland, Clippers players gathered at center court, dropped sweat-jackets with the team’s name around the tip-off circle and then came out with their warm-up jerseys inside-out, keeping the “Clippers” name off of their chests.

The players had discussed boycotting the game, star guard Chris Paul told reporters. They came out for the game in their normal jerseys, but with black socks and bands that game announcers said were also part of a protest.

Players did not speak of the clothing protest ahead of the game. Sterling did not attend and the Clippers lost the game, 97-118 as their opponents, the Golden State Warriors, evened the playoff series at two games each.

Afterward Clippers coach Doc Rivers declined to blame the loss on the furor, saying that the Warriors had outplayed his team and taking responsibility for failing to prepare them mentally for the big game.

Sterling, who made his fortune in real estate, has not made any public comment.

Clippers President Andy Roeser has issued a statement saying he had listened to the recording on TMZ and had not yet determined if it was legitimate or had been “altered” somehow.

“Mr Sterling is emphatic that what is reflected on that recording is not consistent with, nor does it reflect his views, beliefs or feelings. It is the antithesis of who he is, what he believes and how he has lived his life,” Roeser said in the statement.

‘DON’T BRING HIM TO MY GAMES’

The recording appears to be part of an argument between Sterling and a model who uses the name V. Stiviano about photographs posted to Instagram.

“People call you and tell you that I have black people on my Instagram. And it bothers you,” the voice alleged to be Stiviano’s says, according to the recording at TMZ.com. She also says she herself is of Latino and black heritage.

“Yeah, it bothers me a lot that you want to promo … broadcast that you’re associating with black people. Do you have to?” the voice alleged to be Sterling’s says.

Sterling is also allegedly heard telling the woman not to post photos of herself with Earvin “Magic” Johnson. “And don’t bring him to my games, OK?”

Johnson, a former Los Angeles Lakers star, during the broadcast of the game on Sunday called on Sterling to give up his ownership of the team if the comments were proven to be his.

President Barack Obama, who was asked about the controversy while traveling in Malaysia, said the comments were “incredibly offensive racist statements”.

“When ignorant folks want to advertise their ignorance you don’t really have to do anything, you just let them talk,” Obama said when asked about the controversy during a news conference in Kuala Lumpur with Malaysian Prime Minister Najib Razak.

The NBA has said it was investigating the recording, described by Commissioner Adam Silver as “truly offensive and disturbing”. It could make a ruling by Tuesday, TV network ABC reported in its game broadcast.

Sacramento mayor and former NBA player Kevin Johnson, who is assisting the players’ union on Sterling, said if the allegations are true, the players want swift and extreme action by NBA commissioner Adam Silver.

“They are just outraged,” Johnson told ABC in an interview at Sunday’s game. “The players want their voices to be heard. They don’t want Adam Silver to just make the decision without their input. Thirdly, they want swift and decisive action. They want Adam to be as extreme and to do the maximum whatever the sanctions are allowed based on the bylaws and the constitution.”

“This is a binding moment in the history of the NBA,” said Johnson, who met with Silver on Sunday.

The NAACP said on Sunday that the nation’s oldest civil rights group will not honor Sterling with a lifetime achievement award it planned to give the Clippers owner next month because of the controversy over the comments.

Sports news website Deadspin on Sunday posted more excerpts from what is said was a conversation between Sterling and the same woman. On it, Sterling is asked why he has a dim view of blacks, especially since his team has many black players.

“I support them and give them food, and clothes, and cars, and houses. Who gives it to them? Does someone else give it to them? … Do I make the game, or do they make the game?” he is alleged to have said.

Sterling has faced allegations of discriminatory conduct in the past. In 2009, he paid $2.7 million to settle a case brought by the U.S. Justice Department which accused him of housing discrimination against blacks and Hispanics.