Why Are So Many Pro Basketball Owners Jewish (Like Donald Sterling)? 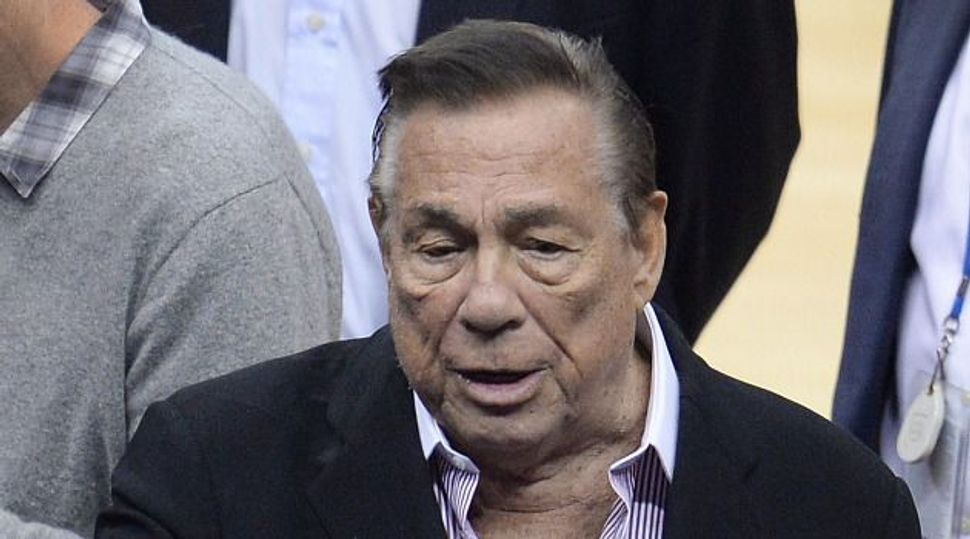 It will be hard to find Jews on the court in the National Basketball Association playoffs. But toss a basketball into an NBA owners’ meeting, and you’ll probably hit one.

There are only three Jewish players in the NBA, and no Jewish head coaches. Yet nearly half the principal owners of NBA teams are Jewish, as are the league’s current commissioner and its immediate past commissioner.

No other major pro league in the United States has such a high proportion of Jewish owners. The NFL comes closest: Roughly a third of that league’s owners are Jewish. Just a handful of pro baseball and hockey owners are Jews.

So why do Jews own so many NBA teams? The answer has to do with the prehistory of pro basketball, the sport’s urban roots and the economics of the modern NBA. Also, Jews are huge basketball fans.

“Jews love basketball,” said Nathaniel Friedman, who writes widely about basketball under the pen name Bethlehem Shoals. “If you asked a Jewish multimillionaire what they want, they’d probably say they want to buy the Knicks, in their dreams.”

American Jews’ overwhelming dominance of the business side of pro ball slipped awkwardly into the spotlight April 29, when NBA Commissioner Adam Silver announced harsh sanctions against Donald Sterling, owner of the Los Angeles Clippers, at a press conference in New York. Silver levied fines and a lifetime ban against Sterling, who had been caught on tape expressing racist attitudes toward black people. During the question-and-answer session, a sportswriter named Howard Megdal (who once wrote a book called “The Baseball Talmud”) asked whether the fact that both Silver and Sterling were Jewish had affected Silver’s response to Sterling’s racist tirade.

“I think my response was as a human being,” Silver said.

The interaction highlighted not only the predominance of Jewish ownership in the NBA, but also the near-lack of African-American owners (Michael Jordan famously owns the Charlotte Bobcats). “People have difficulty talking about [the] conflicts, tensions, the differential privileges,” said David Leonard, an associate professor at Washington State University, Pullman and the author of the 2012 book “After Artest: The NBA and the Assault on Blackness.” “I think moments like this become a moment of anxiety for many in the Jewish community.”

The 14 Jewish principal owners of NBA teams are a diverse group. Some have been in the league for decades, others for just a few years. Herbert Simon has co-owned the Indiana Pacers since 1983. Joe Lacob and his partners bought the Golden State Warriors in 2010. Perennially strong teams, like Micky Arison’s Miami Heat, are owned by Jews, as are longtime losers like the Milwaukee Bucks, which Jewish owner Herbert Kohl is preparing to sell to a group co-led by Jewish hedge fund billionaire Marc Lasry.

Back at the beginning of the professional game, the league also had prominent Jewish players and coaches. Four of the five starters on the New York Knicks were Jewish in 1946, the first season for both the team and the NBA. “For much of the first half of the 20th century, Jews were very involved in basketball as players,” Leonard said. “Especially among second-generation Jewish immigrants, this became a means of asserting one’s American identity, one’s physical prowess.”

Professional baseball at the time could be an unwelcoming place for American Jews, particularly in the years before Hank Greenberg, who went pro in 1930. Baseball owners represented an older elite, members of a native-born class of Protestant industrialists that was anxious about accepting Jews into its ranks.

Basketball, however, was something else. A city game played in the urban neighborhoods where Jews lived, the sport was familiar. It was also relatively new, virgin territory yet to be claimed by an ethnic group. When the sport began to professionalize, the Jews were there. “It was a short step to walk into positions of ownership,” said David George Surdam, an associate professor of economics at the University of Northern Iowa and the author of the 2012 book “The Rise of the National Basketball Association.”

Eddie Gottleib, better known as The Mogul, was the coach of the Philadelphia Warriors when the team won the Basketball Association of America’s inaugural championship in 1946. A Negro league baseball promoter, Gottleib got his start in basketball promoting the South Philadelphia Hebrew Association’s team. He charged a few cents to see the game, attend the dance afterward and enter a raffle for a suit. When the BAA transformed into the NBA a few years later, Gottleib remained a central figure, drawing up the NBA schedule every season until his death in 1979.

Other Jews joined Gottleib on the sport’s business side in the early days. Maurice Podoloff, an attorney, was president of the BAA and then the first president of the NBA (a post later retitled commissioner). Abe Saperstein was the commissioner of the American Basketball League, the NBA’S short-lived competitor, and the owner of the Harlem Globetrotters.

“Basketball was a Jewish sport [for] players, and obviously that morphed into ownership,” said Jeffrey Gurock, a professor of history at Yeshiva University. “It was a high-risk, entrepreneurial type of endeavor that Jews went into.”

Of course, this is all ancient history for today’s basketball owners. Unlike in the NFL, where a number of teams have been owned by the same families since the league was founded, NBA teams tend to turn over quickly, and none has family ties to the earliest days of the sport. Sterling, who will likely be forced to sell the Clippers as a result of Silver’s sanctions against him, is the league’s longest-tenured owner; he’s owned his team since only 1981.

The younger Jewish owners, like Mark Cuban of the Dallas Mavericks, are often basketball superfans who made their money in business and turned to basketball for fun and profit. So why are there so many of them?

A lot of different kinds of people like basketball. But the Jewish love and history of the game seems to have mixed with Jewish affluence and the availability of NBA teams in a way that’s been particularly conducive to Jewish team ownership. “My armchair sociologizing would have it that Jews may or may not have a sense of their history in basketball, but they do love the sport,” said Marc Tracy, who is a staff writer for the New Republic and in 2012 co-edited the book “Jewish Jocks.” “And when they look at the court, they don’t see too many Jews.”

In Tracy’s theory, that fandom has found expression in team ownership. That’s easy to believe after watching Cuban charge the court to hug Mavericks star Vince Carter after the Carter’s game-winning three-point shot against the San Antonio Spurs on April 26: Cuban celebrating harder than any of his players. “Mark Cuban is the biggest Dallas Mavericks fan,” Tracy said.

Beyond being fun, owning an NBA team has turned out to be a pretty good investment. In the 1980s, basketball teams could be bought for a few million dollars. That’s changed dramatically in recent years. Jewish owners like Sterling and Simon, who snatched up the teams decades ago, have made out extraordinarily well. Kohl, who bought the Bucks for $19 million in 1985, is selling to Lasry and his partners for a reported $550 million.

“NBA teams have been an extremely good investment,” Friedman said. “The idea of owning a basketball team is bringing together these two [Jewish] cultural traditions of basketball and being good at business.”

Why Are So Many Pro Basketball Owners Jewish (Like Donald Sterling)?