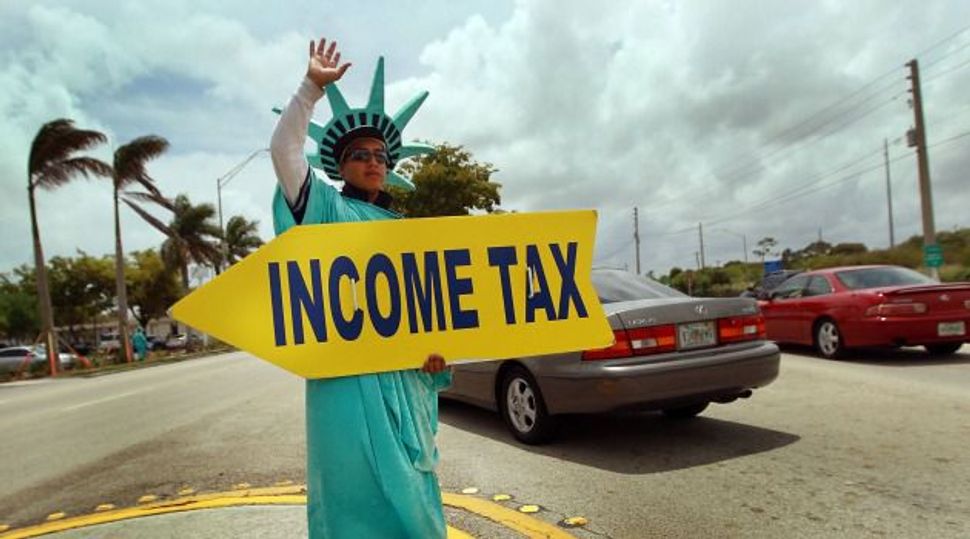 Pay Up: A man holds a sign reminding Americans to file their taxes before the IRS deadline. Image by Getty Images

Israel may still be a safe haven for Jews around the world, but it is no longer their tax shelter.

Thanks to a new agreement signed on May 1, Israel will turn over to the U.S. Internal Revenue Service information on all American citizens holding accounts in Israeli banks. As a result, Americans trying to hide income and assets in Israeli financial institutions will now be exposed to the IRS.

This is certain to lead a significant number of Americans to be confronted with penalties and back payments for money deposited in their Israeli accounts.

But the accord, which was signed under the 2010 Foreign Account Tax Compliance Act, has also caused a scare among many Americans who had never thought of themselves as tax evaders. These include American Jews who own real estate in Israel, children of American citizens who had never even lived in America and Green Card holders who maintain accounts in Israel. Many of them are now in a frantic rush to comply with American laws they did not even know applied to them.

Ofer, an Israeli in his 30s whose American parents immigrated to Israel before he was born, had never paid attention to the fact that he holds American citizenship. It’s been years, he said, since his U.S. passport had been renewed. But now, said the resident of central Israel who, for fear of alerting the IRS, would only agree to be identified by his first name, he may have to pay significant fines to a country he has never lived in.

“This came out of the blue,” Ofer said. “I’ve been paying taxes in Israel all my life, and didn’t think I was doing anything wrong.”

At the advice of his tax accountant, Ofer sent a letter to the IRS, asking for lenience. But if rejected, he could face a hefty fine.

Israel was not given much of a choice about joining FATCA. Had it refused, Israeli banks would have been barred from doing business with financial institutions in the United States, effectively shutting down much of the banks’ activity. “The agreement,” said the Israel Tax Authority’s deputy supervisor for state revenue, Frieda Israel, “provides Israel the status of a country with a signed agreement with the United States. It will make it easier for the necessary financial institutions to provide the information on American accounts in Israel.”

FATCA does not target Israel specifically, and is part of a global effort by the United States to do away with tax havens that have allowed citizens to hide billions of dollars offshore. It is directed at the banks rather than the customers, and requires them, once an agreement is signed, to identify and hand over to the IRS all documentation and information of American account holders.

Twenty-eight countries have already signed FATCA agreements, and discussions are underway with another 75. Lack of compliance could lead not only to closing the doors for banks doing business with America, but also to huge fines, such as the $780 million paid by the Swiss bank UBS for concealing information about account holders from the U.S. government.

Under the new agreement, Israeli banks must now inquire whether customers opening new accounts are American citizens or permanent residents. They will also have to comb through existing accounts to identify Americans based on their previous declarations, birthplace or any other information the bank may hold. Once identified, the names and account information will be turned over to the IRS.

U.S. law requires citizens to file a yearly tax report regardless of their country of residence and regardless of taxes they’ve already paid in their host country. The first $96,600 in income earned abroad is generally excluded from taxation, and some countries have reciprocity agreements with the United States that enable American taxpayers to offset taxes they may have paid a foreign government against what they would otherwise owe Uncle Sam. But Americans still must file the appropriate yearly tax forms documenting they qualify for these exemptions. Americans are also obliged to report all overseas bank accounts that have a balance of more than $10,000.

FATCA’s reach is not limited to American citizens who have moved to Israel; it includes many who had had little to no contact with the United States.

Americans who made aliyah to Israel, even at a young age.

Children of U.S. citizens who were born in Israel but received American citizenship based on their parents’ or grandparents’ citizenship.

Children of Israelis who were born in the United States and are therefore American citizens.

Americans who own real estate in Israel and have opened bank accounts for mortgage payments or for receiving rental checks.

American businessmen and investors who maintain ties with Israeli companies and keep bank accounts in Israel for cash flow.

Jews from the former Soviet Union who lived in Israel for a while before moving to America but maintained an Israeli bank account.

The law is already affecting many Iranian and Iraqi Jews who transferred funds out of their native countries and into accounts in Switzerland or England for safety while they later moved to the United States. Now, with most European countries already signed on to FATCA, these funds are also reportable.

Dave Wolf, an American tax lawyer now based in Jerusalem, said his office has seen an influx of American expats rushing to resolve their tax issues before their bank account information is revealed to the IRS.

“I have hundreds of clients, and I would say that 80% of them had no intention ever to cheat the IRS,” Wolf said. Of those, some had no idea they were required to file taxes. Others, mainly refugees from Arab countries or Holocaust survivors, had kept the accounts secret even from their families, viewing the money as an emergency resource in case they’re forced to flee again, he said.

As was the case for Ofer, many learned about these tax requirements only recently. One of Wolf’s clients is an Israeli who was born in the United States while his family was working for an Israeli organization. “The kid was born there, but has nothing to do with America. He has no American accent, he doesn’t care about the Yankees and he never lived there, but if he doesn’t comply, the bank will freeze his account,” Wolf said.

Another client is an American citizen who never lived in the United States but recently had to pay $1.5 million in back taxes and penalties to settle his issues with the IRS, according to Wolf.

But not all those impacted by the new tax agreement are innocent citizens unaware of their tax obligations.

Though not as popular a tax shelter as the Cayman Islands, Israel has been an attractive destination for American Jews seeking to hide funds or to evade taxes. Some had ties to Israel or visited it frequently, while others chose Israel as their tax haven, believing that the Jewish state would be reluctant to turn over a fellow Jew to the authorities in a foreign country.

In May of this year, a senior executive with the Los Angeles branch of Israel’s Mizrahi Tefahot Bank was indicted on charges that he helped customers open undisclosed accounts in Israel to avoid paying taxes. Another case, settled in a plea agreement, involved the American arm of Israel’s Bank Leumi.

Israeli media reported that at least $5 billion has been withdrawn from Israeli banks and transferred elsewhere since the United States began its increased scrutiny. But Wolf noted that while Israel may be among the first countries to cooperate with American tax authorities, FATCA will become a reality in most countries in coming years. Electronic information sharing will allow the IRS to know virtually about every bank account in the world held by an American. “It is the end of hiding money,” Wolf said. “This is no longer possible.”