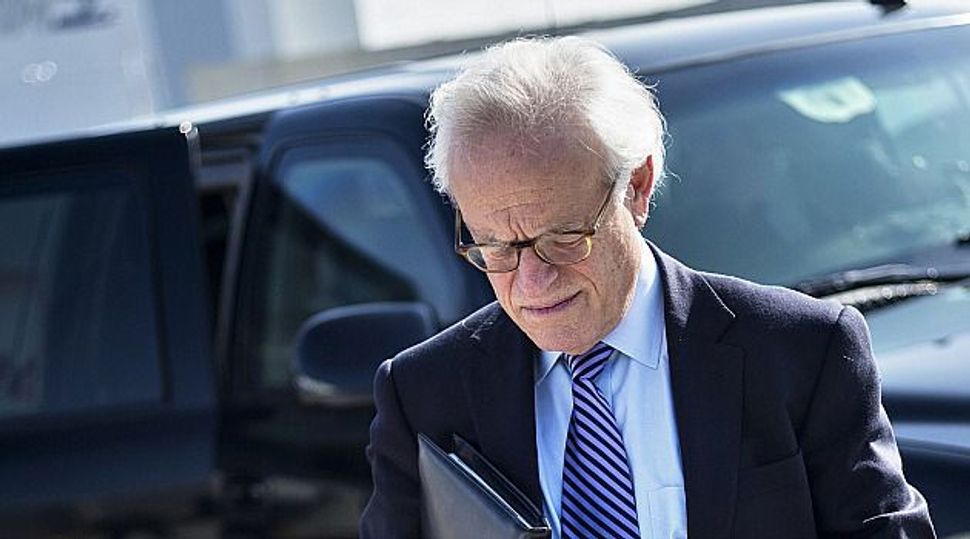 Entering the downtown Washington ballroom that hosted Israel’s Independence Day celebration on May 12, U.S. special envoy Martin Indyk seemed at home, trading handshakes and smiles with Israeli officials just like every year. But Israeli Intelligence Minister Yuval Steinitz delivered a pointed message during his small talk with the American that night.

“I told him,” Steinitz recounted, “that he needs to make clear Israel is not at fault for the collapse of the peace talks.”

There was a reason Steinitz pressed Indyk on this point. In a rare public speech just four days earlier, Indyk singled out Israel’s settlement activity in the occupied West Bank as the key reason for the failure of the U.S. peace effort. The speech followed hard on the heels of a much-noticed article in Yediot Ahranot, one of Israel’s major daily newspapers, in which an unnamed U.S. official widely believed to be Indyk made essentially the same point.

Yet from the American point of view, Indyk, a 62-year-old, Jewish, British-born, Australian-raised naturalized American citizen, could hardly be seen as anti-Israel. In fact, his involvement in Washington with Israel-related issues began with the pro-Israel lobby in Washington. From there, it went through various permutations during long years of work in this area — from think tank scholar to presidential advisor, to two stints as U.S. ambassador to Israel and, finally, America’s chief peace mediator.

Still, Indyk’s winding path through these positions has featured two abiding, and at times competing, characteristics: his support for Israel, and his disdain for Israel’s West Bank settlement activity.

“I don’t see here an evolution,” said Dennis Ross, a former Middle East peace negotiator who was most recently President Obama’s special adviser for the region. “He’s someone who has always been very committed to seeing a peace agreement achieved, and for a while now he has viewed those in the settler camp as not committed to a two-state outcome.”

The administration maintains that Indyk’s views — which have irked both Israel and the Palestinians at various times — are a result of his personality, not of political calculation or bias. “Ambassador Indyk calls it as he sees it,” said an administration official speaking to the Forward on condition of anonymity. “It’s the Australian in him, perhaps. He’s more frank than most diplomats, but he is speaking out because he cares about Israel’s future.”

The nine-month term for Israeli – Palestinian peace talks expired on April 29 with no results, and with both parties unable to agree on extending negotiations. As the prospects for achieving an agreement faded, both parties pointed fingers at the United States, and to Indyk in particular, as the party responsible for the failure.

Yediot’s May 2 extensive interview with unnamed American officials by leading Israeli columnist Nahum Barnea, reported that one of those officials put the burden of failure mainly on Israel and on its decision to issue new building tenders for West Bank settlements even as negotiations were ongoing. “People in Israel shouldn’t ignore the bitter truth,” this official told the columnist. “The primary sabotage came from the settlements.”

Indyk was widely seen as one of the sources for Barnea’s exclusive because of his well-known close relationship with the columnist over many years. The State Department did not deny any of the accusations in Barnea’s story.

Israeli officials grew increasingly angry at Indyk following the publication of Barnea’s article even as the special envoy took to the stage at the Washington Institute for Near East Policy, the think tank he founded nearly three decades ago, to provide an authoritative public account of the failed negotiations.

In his prepared speech, Indyk carefully divided the blame between leaders in Jerusalem and Ramallah, stressing that neither Israeli Prime Minister Benjamin Netanyahu nor Palestinian Authority president Mahmoud Abbas had demonstrated a sense of urgency in dealing with the conflict.

“We have spoken publicly about unhelpful Israeli steps that combined to undermine the negotiations,” Indyk said, “But it is important to be clear: We view steps the Palestinians took during the negotiations as unhelpful too.”

Still, Indyk maintained his critical approach to Israel’s settlement expansion, warning that it “may well drive Israel into an irreversible binational reality.” Then, in unscripted answers to questions presented to him following the speech, Indyk ratcheted up his criticism of Israel, accusing proponents of settlements within the government of “sabotaging” the negotiations.

Indyk’s prepared remarks were “detailed, impassioned and painstakingly evenhanded,” wrote Robert Satloff, the institute’s executive director in a later analysis of the speech. But in his off-the-cuff remarks afterward, Satloff said, “the brunt of criticism fell on the architects of Israeli settlement activity.”

Ross, who has been in Indyk’s shoes himself many times in the past, said that Indyk had “explained away” Abbas’ role in “shutting down” the talks by highlighting the role of Israel’s settlements in leading Abbas to withdraw.

Ross parted ways with Indyk on this. “I would stress the shutting down” by Abbas, Ross said.

Israelis forcefully rejected the notion that Netanyahu carried most of the blame. “It is simplistic and wrong,” said Michael Herzog, a member of the Israeli negotiation team. “The American side has made very significant mistakes during these nine months and it would be wise for them to examine themselves too,” he said.

An administration official argued that Indyk “spoke out of genuine commitment” to Israel. Indyk, the official said “has a 35-year record of working toward peace, because peace is the best way to secure Israel’s future as a Jewish state and a strong U.S.-Israel relationship is the best way to achieve that peace.”

This 35-year record began at the heart of the pro-Israel establishment in Washington. Steve Rosen, a former senior official with the American Israel Public Affairs Committee, the powerful Washington lobby, had mentored Indyk at the Australian National University, and then invited him to move to Washington and run the lobby’s regular publication, Near East Report. Shortly after, Rosen recommended Indyk as the first director of the Washington Institute for Near East Policy, a pro-Israel think tank founded by AIPAC supporters.

“This is a guy who had read every book ever published with the word ‘Israel’ in its title,” Rosen said of his protégé. Indyk, he noted, had both exceptional analytical capabilities, and “great diplomatic skills.”

These same skills impressed Bill Clinton when Indyk was among those who briefed him on Israel in the early stages of his 1992 presidential campaign. This led eventually to Clinton choosing the young analyst as his chief Middle East adviser upon taking office.

Indyk’s diplomatic skills also helped him avoid clashes at AIPAC and at the Washington Institute. Both organizations have been known for their strongly pro-Israel and at times hawkish boards, which differed from Indyk’s own more dovish, anti-settlement views.

“Martin is a politician and understands the institutional context,” Rosen said of the envoy’s early years with the pro-Israel groups, “so he probably pulled his punches at that time.”

During the Clinton administration, in which he served twice as ambassador to Tel-Aviv, Indyk’s strong belief in Israeli–Palestinian reconciliation found fertile ground with the new president’s interest in the region and Israeli Prime Minister Yitzhak Rabin’s willingness to move ahead in a historic peace process. Indyk was close to Rabin and was among those waiting at the Tel Aviv hospital the night Rabin was assassinated in 1995.

When Netanyahu took office in 1996 tensions rose, especially after the 1998 Wye River negotiations, in which Indyk thought the Israeli leader was not forthcoming. “I don’t think there are many people around who hadn’t heard from Martin a tirade about Netanyahu,” said Rosen.

Still, Indyk’s constant ups and downs with Israeli leaders did not hinder Secretary of State John Kerry’s decision to appoint him as chief U.S. mediator for the long running peace process as it reached its final stage.

With negotiations now seemingly terminated, Indyk’s future plans are unclear. The State Department has stressed he is not stepping down yet. But his choice to call out those responsible, even at the risk of being painted as unfriendly to Israel, could indicate that Indyk has already made up his mind to leave.

Though unsuccessful in his latest effort, Indyk will not necessarily suffer a blemish on his resume.

“No one ever gets blamed for failure in something that is mission impossible to start with,” said Aaron Miller, a former State Department peace negotiator.