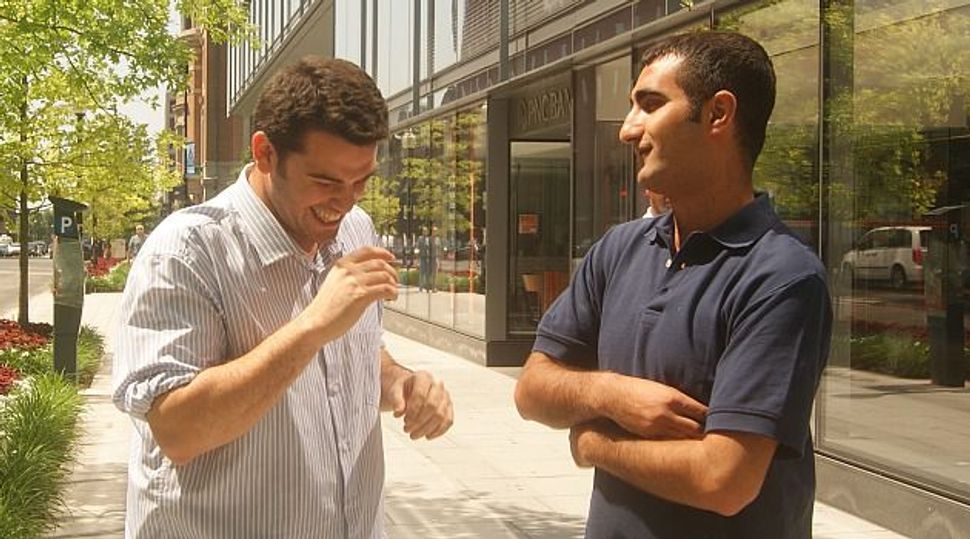 News of the mounting crisis in Israel caught two young interns, one Israeli and the other Palestinian, far away from home.

At their host family’s house in northwest Washington, both tried to keep up to date. Yehonatan Toker, 28, rushed to the Internet to catch up on news and to read emails from his Israeli friends, emails that conveyed the sense of anger and frustration many shared following the events.

Hamze Awawdeh, 24, watched news reports showing the burnt car used by the Jewish teens’ kidnappers and immediately recognized the surroundings. The car was found outside his hometown of Dura, south of Hebron. He later heard from his mother that Israeli soldiers conducting searches for the missing teens killed her cousin’s son.

But still, they sat down, an Israeli reserve officer and a Palestinian nationalist from a well-known political family, and discussed the events.

“And guess what? We had a decent conversation, and we both got to see that there’s humanity in the other side,” Toker said. “What we are doing now is exactly how we will try to prevent the next murder.”

Toker and Awawdeh met in Washington, where they are participating in a unique internship program sponsored by New Story Leadership, an organization that brings emerging Israeli and Palestinian leaders to America’s capital.

Each works for a group representing the interests of the other side: Awawdeh spends his days at the offices of Americans for Peace Now, a pro-Israel group committed to promoting a two-state solution, while Toker heads to the American Task Force on Palestine, a pro-Palestinian organization that shares the same goal. After work they ride the metro to the home of Molly Holt, their host, and share stories over dinner.

“It’s like a family dinner anywhere,” Holt said. “My mission is to create a safe place to exchange ideas.” She has hosted Israelis and Palestinians before, but never at the same time.

Toker and Awawdeh had to cross the ocean before they could share a dinner conversation, but they might actually have met years earlier. Toker served in a special army unit that was posted in Dura, among other places. One of Awawdeh’s encounters with Israeli soldiers was during the second intifada, when they destroyed part of his home in search of a terror suspect who wasn’t there. A commando fighter told the family, “I want to see you living in the street.” Looking back, Awawdeh does not see the commando as representative of all Israelis. In that sense, he’d rather have Toker serve in uniform in Dura. “It would be better that he works [there] than somebody else, because there are many people, many bad people who are dangerous for me and for everybody,” Awawdeh said.

Sharing a home in Washington has transformed the young Israeli and Palestinian into close friends. They spend their free time together and joke about everything, including the conflict that awaits them back home. At the height of the intifada, when suicide attacks traumatized Israelis, Toker recalls “checking for faces” whenever he got on a bus, to try to determine whether there were any potential terrorists on board.

What would Toker have said if he’d seen Awawdeh sitting there?

“Now that I’ve been living a few weeks with him, I’d say it’s just an ugly face,” he joked.

Against the backdrop of the latest eruption of violence in the region, Toker and Awawdeh’s new friendship seems unusual. It could be explained by their distance from the heated rhetoric on the ground, but it also could be explained by the atypical nature of the two interns themselves, who were both born into and raised in the conflict, yet remain committed to dialogue with the other side.

Awawdeh comes from a prominent family from the Hebron area. His grandfather was a senior political figure in Fatah who, in Awawdeh’s words, “fought the occupation in the ’70s.” He himself studied at Birzeit University, where he developed his belief in a peaceful resolution to the conflict. He now works for Yala, an online project of the Peres Center for Peace that brings together Arabs and Israelis.

Working side by side with pro-Israelis at a Jewish-Zionist organization in Washington, therefore, was not a big shock for Awawdeh. But for interns in previous years, said Ori Nir, APN’s director of communications and public engagement, it was. “When young Palestinians step into APN, they feel like they’ve stepped into the territory of ‘the other,’” Nir said. “What we try to do is allay their discomfort through showing them that you don’t have to be anti-Palestinian in order to be pro-Israel.”

Awawdeh describes himself as a “nationalist pro-Palestinian” who has chosen the path of dialogue with Israelis. He argues that the two-state solution is “not dead” and can still be achieved. The way forward should be based on negotiations, not on violence, according to the young activist. Given the collapse of the latest round of American-brokered negotiations, he supports the Palestinian appeal to international bodies to win recognition as a state. This is a step opposed by Israel and the United States but viewed by other players as a legitimate, nonviolent move.

Awawdeh opposes, however, the movement to boycott, divest from and sanction Israel — known as BDS — which he views as a form of collective punishment. “This is what I suffer from. All Hebron residents were treated as suspects,” he said. “I saw this humiliating as a threatening factor in my life, and I cannot accept what BDS is doing with the boycott against Israel.”

Toker, who is majoring in Hebrew literature at the Hebrew University of Jerusalem, describes his politics as “evolving.” Coming, as he does, from a strong military background, Toker admitted that it was difficult to adjust to a Palestinian roommate.

“Coming here and sitting with Hamze when back at home there’s stuff going on, it wasn’t easy,” he said. “But as time goes by I understand that I didn’t come here to meet Hamze, I came here to meet myself. It’s me getting out of my comfort zone.”

Ghaith Al-Omari, ATFP’s executive director, praised the curiosity demonstrated by Toker, who roams the office, notepad in hand, with an endless list of questions. The internship program, Al-Omari said, is valuable for the organization as well. “It allows us to engage with the Israeli perspective beyond the official views,” he said. “It helps us get some texture, to see what things are on the minds of young people.”

The two young interns see it as their mission to come up with new ideas to revive the two-state vision that is losing support on the ground. “We’re here to prevent our children from coming here in 20 years and having the same conversation,” Toker said. The path, they believe, is through getting to know each other better.

And this is the task they intend to engage in when they return home in August. “We’re going to travel together,” they promised. They have already planned to hang out in Jerusalem and catch a movie in Tel Aviv.

To do that, they will have to overcome the additional closures and restrictions imposed by Israeli security forces as a result of rising tensions on the ground. Still, they are hopeful that Awawdeh will be allowed to enter Israel and that they will get together soon, before Toker’s planned reserve service in the Israeli army.