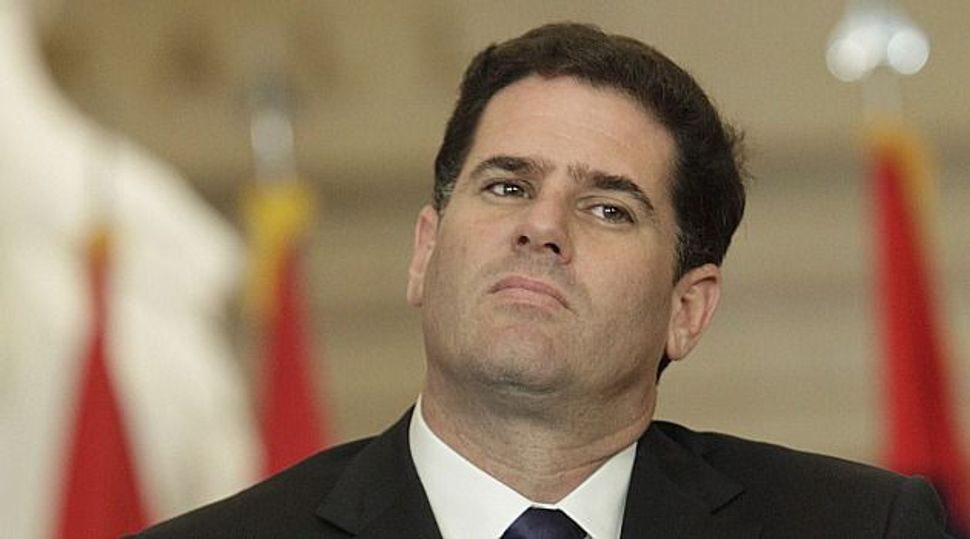 Selling Israel’s Side: Israeli ambassador Ron Dermer has won praise for his handling of the Gaza bombardment — so far. Image by getty images

With more than 50 media interviews in one week and at least a dozen briefings and conference calls, Israeli Ambassador Ron Dermer is on the frontlines of his country’s media blitz in America.

This may not be the most important front, when rockets are flying into Israel and attacks continue in Gaza, but for Americans, the battle over public opinion has taken center stage.

Israel launched its media campaign in the U.S. with an arsenal of catch phrases (“What would you do if New York and Washington were attacked by rockets?”) audio-visual affects (including a recording of a rocket alert siren played out in the U.N. Security Council by the Israeli representative), YouTube videos straight from the war zone, and colorful infographics demonstrating how an entire country is now in the range of Hamas rocket attacks.

The results of Israel’s hasbara, or propoganda, campaign are relatively positive, experts say.

But as anyone who’s dealt with wartime public relations knows, it only takes one misguided missile or human tragedy to lose international public support.

“You can’t keep this up for long,” Rabinowitz warned, adding that if Israel’s military campaign continues and Palestinian casualties mount, “it will be bad.”

This latest round of fighting in Gaza found Dermer leading the battle over the hearts and minds of Americans. Hopping between TV studios, briefing lawmakers and speaking to reporters, Dermer tried to translate the situation on the ground into terms his American audience can relate to.

Just like his predecessor Michael Oren, Dermer, who was born and raised in the United States, comes to the media battlefield armed with perfect English and with first-hand understanding of American culture and society. Using these tools skillfully, Dermer tried to drive home the idea that just like Americans, Israelis too only wish to defend themselves.

“Imagine a situation when you would hear a siren go off in New York and in Washington and everyone would have to run into bomb shelters, that’s what happened today in Israel,” Dermer told CNN anchor Erin Burnett on July 8. Speaking to a gathering on Capitol Hill the next day, he went through the same routine and noted that the Israeli population now under rocket threat is equal to 200 million Americans.

“As somebody who was born and raised in this country, it’s not hard for me to imagine what the American people would expect from their government if 200 million people had to go into a shelter,” he said.

Dermer even used the analogy on Canadian TV, swapping Washington and New York with Toronto and Montreal.

“The more you do that, the more people understand,” Dermer told the Forward in a July 11 interview, on his way to a Capitol Hill meeting. “Being born and raised here allows me to speak in a way that Americans understand.”

This is not only a messaging technique aimed at winning the audience’s sympathy. It is also a strategy designed to tackle Israel’s single greatest PR challenge — the perception of disproportionate action, that its massive, deadly airstrikes exceed the warranted response to Hamas’s rocket attacks. Getting Americans to empathize with Israelis is an important step in persuading them to accept Israel’s harsh response.

“People need to understand that this is not a matter of counting body bags on each side,” Dermer said, immediately pulling out yet another analogy Americans can relate to. In World War II, the ambassador said, the number of German casualties was 20 times that of Americans who lost their lives in the war, “and that didn’t make the Nazis right.”

Israel registered one of its biggest PR boons on July 8, when The New York Times, a publication often criticized as being hostile to the Netanyahu government, ran an article detailing the measures taken by Israel in order to avoid civilian casualties. The article described Israel’s attempts to call, text message and leaflet Palestinians, warning them to leave before their buildings would be bombed. It also reported on the new system known as “knock on the roof” in which an empty missile is launched before the real attack in order to allow residents time to leave.

“This was a tremendously valuable single story,” said Rabinowitz, adding that it made Israeli forces seem like tzaddiks, righteous people, in the world of war.

But this positive coverage of Israel came only a day after the Times published an editorial which accused Netanyahu of not speaking out against the murder of a Palestinian youth by Israeli extremists. Dermer, a former top aide to Netanyahu who is still considered to be one of the prime minister’s closest advisers, took an unusual step and decided to answer back. He published on BuzzFeed a detailed response challenging the Times claims and highlighting the prime minister’s forceful response to the murder. (Dermer’s piece on Buzzfeed was provided to the website by the embassy and was not a vetted editorial entry).

It wasn’t the only media crisis Israel had to deal with these past weeks.

There was disturbing footage of a 15-year-old U.S. citizen brutally beaten by Israeli border police on July 3. The teenager, Tariq Khdeir from Tampa, Florida, is the cousin of the Palestinian youth burnt to death by Israelis. The footage and Khdeir’s American citizenship drew attention to Israeli treatment of Palestinian protestors.

When asked, Dermer was unapologetic and said that the youth “was not just an innocent bystander who was pulled off of the school yard.” The ambassador insisted that “when all the facts come out, it will tell a very different story.” But what viewers saw on the screens were photos of an American teenager whose lips were swollen out of shape after of the beating he had suffered — and a video that showed incontrovertible evidence of Israeli brutality against a teen lying senseless on the ground.

“Israel got a black eye and there is no way to sugarcoat something like this,” said strategic communications consultant Laura Kam. The way forward when faced with such a PR disaster, she added, is by “having a quick investigation and apologizing.”

One issue absent from the Israeli messaging book is the peace process and Israel’s commitment to a two-state solution.

“It’s a very important message to share,” said Kam, who was involved in pro-Israel campaigns. “Liberal Americans really need to feel Israel wants peace. You need to reach beyond the people who watch Fox News.”