United by Grief, Families of Slain Israeli and Palestinian Teens Divided Over Gaza 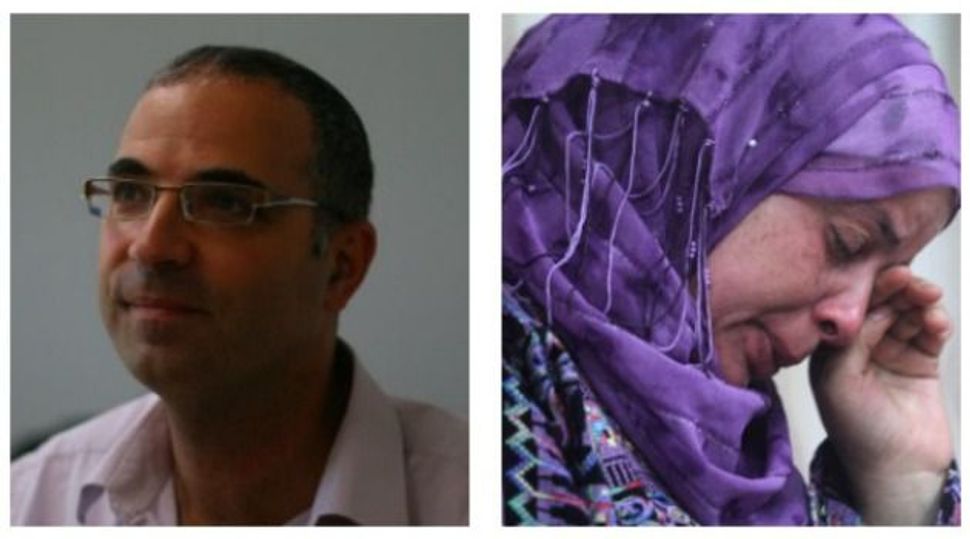 A month after the murders of four teenagers — three Israeli and one Palestinian — their families are struggling to process their grief and are responding in different ways to the regional conflagration ignited by their childrens’ deaths.

In his free time these days, Hussein Abu Khdeir visits injured patients from Gaza who are being treated at the Al-Makassed Islamic Charitable Society Hospital in Jerusalem.

In a strange way, it puts his personal grief in perspective. “I saw one child, 3 months old, who lost a leg and has a head injury,” Abu Khdeir said. “I forgot my own son and cried.”

Abu Khdeir, whose 16-year-old son Mohammed Abu Khdeir was burned alive in an apparent revenge killing after three Israeli Jewish teens were murdered in the occupied West Bank, garnered the sympathy of many Israelis in his grief. He and his wife accepted condolence visits from numerous Israeli Jews, including several government officials, personally, in a tent outside his home in the Shuafat neighborhood of East Jerusalem.

“I want them here,” the boy’s mother, Suha Abu Khdeir, told a reporter from NPR, referring to a group of Israeli Jewish women that had come to visit her. “I want these women to support me.”

But no one should confuse that with acceptance of Israel’s policies — particularly as the government has gone from a clampdown against Hamas to a ground war in Gaza that has left hundreds of Palestinian civilians dead and thousands wounded. “The Israeli government is always looking for the next war,” Hussein Abu Khdeir, 48, told the Forward in a July 29 interview.

The Abu Khdeir family lives in Shuafat, a well-to-do neighborhood lined with villas and bisected by the track of the Jerusalem light rail. There the murdered boy’s father runs a hardware store popular with Arab and Jewish customers. A 15-minute drive to the west leads to Har Hotzvim, the technological park of Jerusalem, where Yishai Fraenkel, 44, is general manager of the design and development center at Intel’s headquarters in Israel. His nephew was 16-year-old Naftali Fraenkel, one of the three murdered Israeli teens.

Like Abu Khdeir, Yishai Fraenkel bridges between Jews and Palestinians. He has spearheaded Intel’s effort to outsource work to startups in the Palestinian city of Ramallah on the West Bank, and said he plans to continue to do so. But Fraenkel stands behind Israel’s military campaign in Gaza, despite the large number of civilian casualties. The violence, he said, “started with the murder of three innocent boys. It continued with continuous attempts at mass murder of Israelis.”

Fraenkel was referring to the hundreds of rockets Hamas fired into Israel from Gaza following Israel’s sweeping crackdown against Hamas across the West Bank — a crackdown that Israel launched initially in response to the teens’ kidnapping. So far, almost all the missiles have either been blocked by a high-tech air defense system or fallen on empty ground, causing only three fatalities.

Fraenkel lives in Nof Ayalon, a short walk from his nephew’s parents, Avi and Rachel Fraenkel. He met me between appointments; he works a double shift to accommodate both Israeli and American business hours.

“These are very hard days,” he said. “I carry as part of my family a very big personal pain. I carry very big pain as an Israeli citizen these days.”

Naftali’s mother, Rachel Fraenkel, publicly condemned the murder of Mohammed Abu Khdeir immediately. In a statement issued in the midst of her own mourning, she said: “There is no difference between blood and blood. Murder is murder. There is no justification and no atonement for murder.”

Yishai Fraenkel said that during a shiva visit, Jerusalem Mayor Nir Barkat called Hussein Abu Khdeir and then passed over the phone. Fraenkel said he spoke to Abu Khdeir.

“We lost a son in our extended family,” Fraenkel explained to the Forward. “Our hearts went out to [the Abu Khdeirs]. We wanted to reach out and give them a warm word. The second reason was a public one of condemning publicly any thought of revenge.”

“I didn’t know where he was, in a studio or something,” he said. “He spoke… I didn’t understand him at all.”

Israeli authorities have named two Palestinian suspects in the deaths of the three teens, still at large, whom they are pursuing as the presumed murderers. The nature of their connection to Hamas, which Israel initially claimed ordered the teens’ kidnapping, remains unclear. But Abu Khdeir resists the assumption that Palestinians murdered the three Israeli teens. “No one has claimed responsibility,” he said. Perhaps the three bodies discovered outside Hebron were actually planted there, he mused.

The search for suspects in the murders of the three Jewish teens and the Palestinian youth, respectively, shed light on the vastly different legal systems that operate in Israel and the West Bank. After the three Israeli teens were declared missing, the Israeli army set up a dragnet. Some 400 Palestinians were arrested, many of them activists affiliated with Hamas. Residents of the Hebron area in the West Bank, near where the teens were last seen, were barred from crossing the Allenby Bridge into Jordan. After Israeli authorities identified Marwan Qawasmeh and Amer Abu Aisha, two Hebron locals, as their two main suspects, the army blew off part of the exterior walls of Qawasmeh and Abu Aisha’s homes. A military spokesman explained that soldiers were “breaching the perimeter” to allow for more thorough searches.

By contrast, when Mohammed Abu Khdeir was declared missing, there was no mass injunction against travel abroad. Police at first cordoned off streets in Jerusalem and searched passing cars. After the teen’s charred body was found in the Jerusalem forest, the police arrested six suspects, three of whom remain in custody. Authorities have not publicly identified two of them, on the grounds that they are minors. The third, Yosef Haim Ben-David, rented a home in the West Bank settlement of Adam, which has not been demolished.

For all this, Mohammed Abu Khdeir, like the three Jewish teens, was named a victim of terrorism, and his family is entitled to a stipend from the state.

At Intel, Fraenkel accepted the fact that a Jewish Israeli had killed Mohammed Abu Khdeir. But he rationalized the disparities in the handling of the cases.

“There is no difference in the people who murdered Mohammed and Naftali,” he said. “There’s a tremendous difference in the way the societies treat these people. If a murderer is not supported, he becomes minority, he is cast aside, and these things die out. Unfortunately this is not the case in Palestinian society.”

For the families of both victims, the police have been a disappointment. The officers who initially answered a distress call from one of the three Israeli teens assumed it was a prank and failed to react promptly. In Abu Khdeir’s case, police received a complaint the day before the murder about an attempted kidnapping of a 7-year-old boy by Israeli Jews — allegedly by the same people who murdered Abu Khdeir. Police spokesman Micky Rosenfeld said police set up roadblocks in the area but could not find the would-be abductors. Since then, Rosenfeld said, police have stepped up patrols in the area.

Abu Khdeir says that if the police had apprehended the kidnappers during their first attempt, his son would still be alive.

Suspects in the triple murder of the Israeli Jews remain at large. The trial began July 27 for Ben-David, the alleged ringleader in Mohammed Abu Khdeir’s murder. Abu Khdeir’s father, Hussein, is praying for a harsh sentence, even though Ben-David is pleading temporary insanity.

United by Grief, Families of Slain Israeli and Palestinian Teens Divided Over Gaza