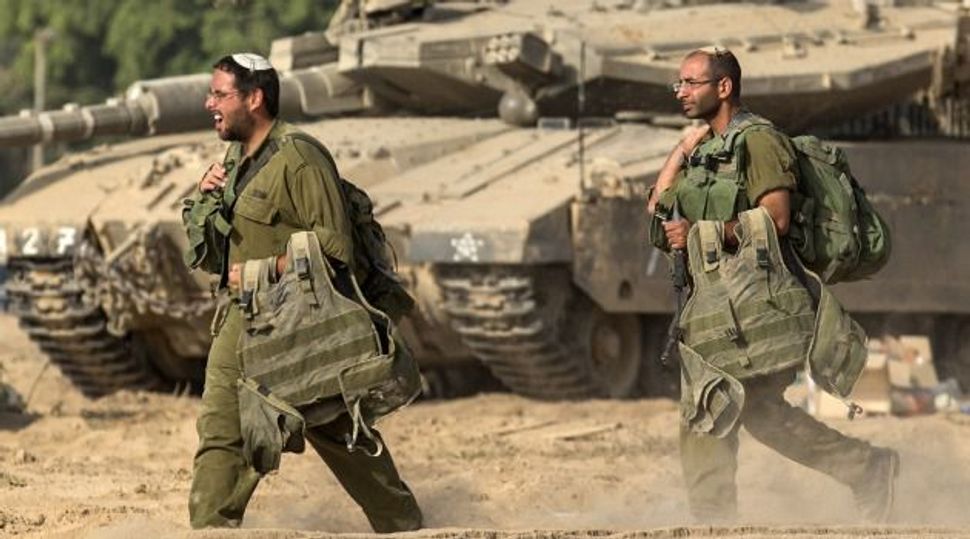 (Haaretz) — The suspected capturing of 2nd Lieutenant Hadar Goldin from Kfar Saba, a commander from the Givati Brigade’s Reconnaissance Battalion, is likely to alter the course of the war in the Gaza Strip. The incident, which occurred during a breach of the humanitarian cease-fire declared a few hours earlier, is a wildcard: It put an immediate end to the cease-fire and will likely ramp up public pressure on the government to respond more forcefully in Gaza.

The cabinet convened on Friday in Tel Aviv to discuss the new developments. Despite the mounting losses, the prime minister, defense minister and senior IDF commanders considered ending the ground operation and exiting the Gaza Strip unilaterally, without an agreement. Now, the situation is more complex. According to polls, over 80 percent of the public supports expanding the ground operation. The great sadness surrounding the many fallen soldiers is now joined by fears for the fate of the kidnapped officer, as well as the anger over Hamas’ insistence to violate the cease-fire.

But despite the understandable anger and worry, we should take note of the differences between the capturing of 2nd Lt. Hadar Goldin and that of Cpl. Gilad Shalit, who was kidnapped by Hamas during a time of military tension, but not during a war. Further, Shalit’s capturing led to incredible public unity and pressured the government to make a rare deal to release prisoners (1,027 terrorists), a concession many considered overly excessive.

Now, the circumstances are different. First, the changes to the governing coalition and the increasing intensity of the conflict with Hamas since Shalit’s return will prevent the government from engaging in another prisoner exchange swap. Second, a capturing during a war is completely different. Even though Israel fights a terrorist organization, and not a country, 2nd Lt. Goldin should be viewed as a prisoner of war, as IDF officers suggested, and not kidnapped. During wars, prisoners are taken, as soldiers also fall (63 soldiers and 3 civilians at this point).

Despite the great pain and sadness surrounding a captured soldier, this should not shape the face of this particular conflict – not in making concessions and not in negotiations, not in sobering assessments of this operation’s achievements or the need to either retreat or move forward. Instead, the cabinet must now make rational decisions about the course of the war in light of the incident near Rafah Friday morning.

Since the fighting began on July 7, Hamas has made many attempts at capturing IDF soldiers, with the understanding that getting their hands on a live soldier would be achievement, as well as a bargaining chip in negotiations with the Israeli government in releasing Palestinian security prisoners – a rehashing of the Gilad Shalit deal – that could also improve the Hamas position at the conflict’s end. Every Hamas squad that ventured into Israeli territory through underground tunnels to carry out an attack was accompanied by a second squad with orders to capture, armed with anesthetics, syringes and handcuffs.

According to initial reports from army sources, the incident began shortly after 9:30 A.M. on Friday morning near northwest Rafah in south Gaza. A Hamas suicide bomber detonated near a contingent of Givati Brigade soldiers, while they also took fire. Two were killed and others were injured. As medics began treating the wounded, it was discovered that 2nd Lt. Goldin was missing. The soldiers then found the tunnel shaft that was used by the attackers to escape. A senior commander ordered the soldiers to pursue the attackers through the tunnel, which they did, eventually reaching an empty mosque. Other Special Forces soldiers were called to the scene and began conducting searches, which are still ongoing. The soldiers’ entry into the urban area was accompanied by artillery fire and aerial support, the heaviest the IDF has used up until this point. The Palestinians have reported dozens of casualties.

The IDF is still unsure of Goldin’s condition, or if he was injured or killed by the blast. After the previous incident that gave rise to suspicions of a kidnapped soldier – the APC that was attacked in Shujaiyeh on July 20 – it was quickly surmised that the missing soldier, Staff Sgt. Oron Shaul, was killed during the attack. A few days later he was declared a fallen soldier whose place of burial was unknown. This time, the situation is more complex. This will affect the way in which searches are conducted, as well as Hamas’ bargaining ability. After Shalit was kidnapped, the organization immediately announced that it was holding a live soldier. Later, Hamas was scolded by Hezbollah, which stated that revealing the soldier’s condition should have been part of the negotiations, as Israel could be made to pay for such information. That is the script Hezbollah followed after it kidnapped two soldiers, and is the same script that Hamas followed regarding Oron Shaul.

The attack and the capturing occurred only a few hours after the 72-hour humanitarian cease-fire secured by the U.S. and the UN went into effect. The White House published statements harshly criticizing Hamas, and calling the attack a barbaric violation of the agreement. Robert Serry, the UN Middle East envoy, issued a conditional condemnation of Hamas, stating that he could not confirm the Israeli reports of when and where the attack took place.

All of this has meaning in the realm of public relations and perhaps policy, but not on the ground.

The short-lived cease-fire is over, and the expectations that the IDF would leave the Gaza Strip in 72 hours, after neutralizing the tunnel threat, are now much less realistic.