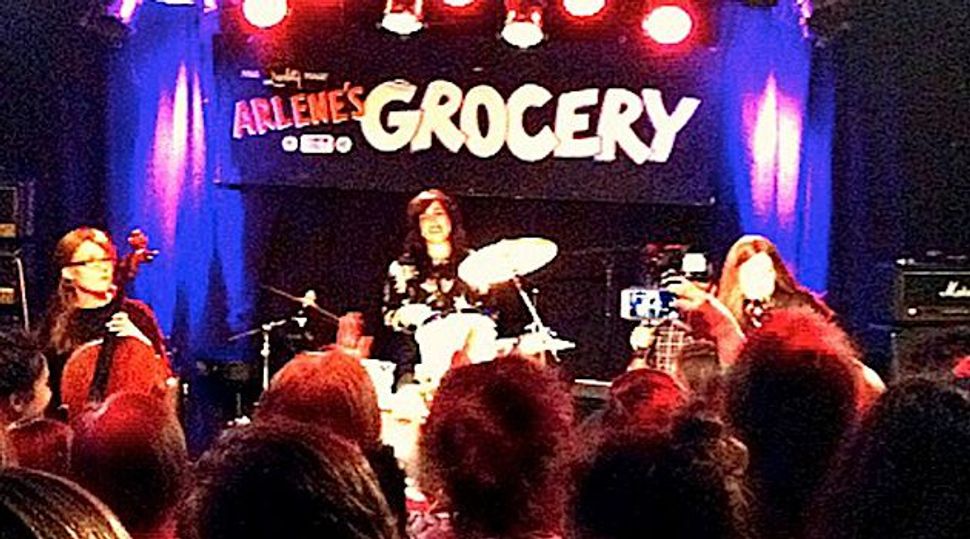 The bar adjacent to the concert venue on Manhattan’s Lower East Side was packed. Orange Christmas lights lined the wooden rafters on the ceiling of Arlene’s Grocery, casting the 70 or so people queuing up in a soft red glow.

But all those waiting to see the rock band Bulletproof Stockings were women. As Hasidic women, the band’s musicians will not play for men because of the modesty prohibition of kol isha, which dictates that a Jewish man should not hear a woman sing if she is not related to him. On Thursday night, August 7, no men were invited inside the Stanton Street venue.

But that’s not to say all the women waiting to see the band were Hasids.

Fortune Chalme, a 20-something African-American woman, was waiting in line for her friend, Naomi Feuerstein, who had told Chalme about Bulletproof Stockings and the concert. “When I tell my friends a Hasidic women rock band, it sounds bad. But you have to listen to it,” Chalme said.

Feuerstein, a young woman wearing bright-red lipstick and leopard print sunglasses, met Chalme not long afterward. Feuerstein had first seen Bulletproof Stockings at a smaller gig at a vintage clothing store in Brooklyn’s Crown Heights, completely by accident. Feuerstein, who identifies as Jewish, was shopping in the store earlier that day when an employee mentioned the concert later that night. “I was really impressed how good it was while still being religious,” she said.

At 8:00 p.m., a full hour after the concert was supposed to start, the doors opened. And as the fans flowed in, the sheer variety of women represented in the audience became clear. Women of all different races and ages were present. Of the 100 or so women assembled, only a dozen were Hasidic.

The only men evident were a handful wearing red-and-white checkered wristbands that marked them as members of the production crew setting up to film the band for the Oxygen channel’s new show, “Living Different.” Each episode will follow women living unconventional or alternative lifestyles. The Bulletproof Stockings and their gig at Arlene’s Grocery will feature prominently in an episode planned for the upcoming season.

Dalia Shusterman, drummer, and Perl Wolfe, keyboardist and singer, make up the core of the band. The long hair of their sheitels swayed back and forth as Shusterman pounded on the drums and Wolfe sang her heart out. The set list comprised numbers from their four-song EP, several Hebrew nigunim — a kind of a cappella semi-improvised chant — and a new song, called “Castaway.”

After the concert, Shusterman and Wolfe were greeted by a group of Hasidic women who cheered as they walked out of the venue to welcome the press and the cameras waiting outside.

When Shusterman and Wolfe met for the first time three years ago, Shusterman was just getting over the death of her husband and embarking on her new path as a single mother. With four young boys in tow, Shusterman moved to Crown Heights, Brooklyn from Los Angeles. At the same time, Wolfe was dealing with her second divorce through original songwriting, an outlet that hadn’t appealed to her in the past. When she asked around for potential band members, Shusterman’s name popped up.

As Shusterman put it, “Hashem sends a cure before he sends a sickness.” And thus, the timing was just right for the two to create Bulletproof Stockings.

Bearing their respective weights on their shoulders, Shusterman and Wolfe aimed to create music that would empower women. They chose their name, Bulletproof Stockings, because it brings together two seemingly oppositional ideas: strength and feminism on one hand, and Hasidism and femininity on the other.

The group’s no-men-allowed rule has led some critics to accuse Bulletproof Stockings of being man-hating feminists. Wolfe and Shusterman respond that they don’t hate men: All they want to do is create a separate space where women can experience joy, with no malicious intent toward men.

“It’s about women connecting,” Wolfe said. She explained that women have a certain essence and men have their own. One is not superior to the other, but they have different values. For Wolfe and Shusterman, “There’s something very powerful about being in a room full of that feminine essence.”

“It’s great because I don’t have to put my face on,” Miriam Haimowitz said during a break in Bulletproof Stocking’s set. She gestured to her relatively make-up free complexion. “Normally I don’t go to concerts,” she said, “but here I can relax.”

The duo, however, don’t deny being feminists.

In their particular branch of Hasidism, Chabad, women often function as leaders in the community, albeit in nonrabbinic capacities, since the sect bars women from the rabbinate. The band members relate that their Rebbe, Rabbi Menachem Mendel Schneerson, holds special talks just for women and encourages little girls, as young as 2 or 3 years old, to “find your talent and use it.”

“Hasidic women are the ultimate feminists,” Wolfe said, laughing. “They can keep a home and rock out.”

The themes of their songs are not heavily Hasidic or religious, and the lyrics are open to interpretation. The unstressed religious undertones contribute to the universality of the music and why so many different women can relate to it. Although Bulletproof Stockings advertise themselves as a Hasidic band, their sound is strikingly different from any other Hasidic music out there.

Shusterman and Wolfe list a wide diversity of musicians among their influences, ranging from Mozart, to Led Zeppelin, to Diana Ross. “I think Lorde is great,” Wolfe added as an afterthought. They only named one Jewish band, Haim.

They describe their sound as a mix of blues, jazz, classical and rock. “People don’t want cookie-cutter pop. It’s hard to define us,” Wolfe said. She was thrilled when one critic called their music “strange” and when another said they sounded vaguely country.

Despite receiving a recent explosion of press, Shusterman and Wolfe want to stay grounded. Their music and concert experience is meant to bring women together and in doing so, empower them; after all, “Hashem is guiding our path if we keep the message clear,” Wolfe said.

So far, Bulletproof Stockings has only four songs available to buy, but the band hopes to have an album out this winter.

You can listen to one of their songs, Vagabond’s Wagon, here