Why Israel’s Fight Against William Schabas May Be Off-Target 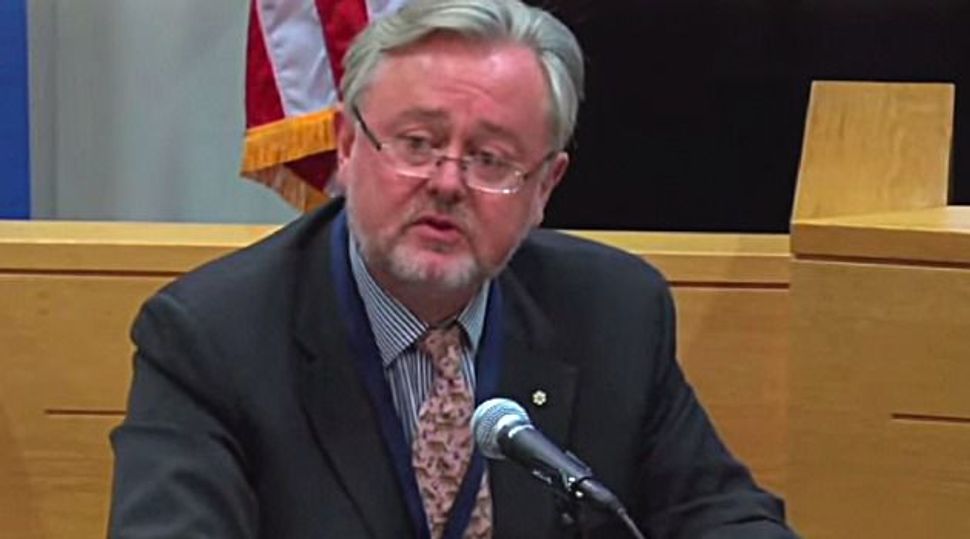 Embattled: William Schabas, chair of the U.N. Gaza war crimes panel, has come under preemptive attack from Israel and its supporters. Image by Youtube

Before his foot even touches Gaza’s ground, the Canadian human rights scholar recently appointed to head the United Nations’ inquiry into the latest war there has come under withering preemptive attack.

Israeli officials and their American supporters have compared the choice of William Schabas to chair the Gaza inquiry commission to “inviting ISIS to organize religious tolerance week” — a reference to the violent, fundamentalist Islamic group whose mass murders in Syria and Iraq have won it infamy. Full-page ads in The New York Times and The Washington Post called Schabas “an apologist for radical anti-Semites.”

This barrage shouldn’t have surprised Schabas, the son of a prominent Canadian Jewish musician, who fondly recalls visits to synagogues and family meals at Jewish delicatessens. He may — as he has noted — visit Israel frequently, actively oppose an economic boycott of the Jewish state and sit on the board of The Israel Law Review and on the advisory board of a London-based Jewish human rights group.

But the scholar has never made a secret of his views of the Israeli government’s policies and of its prime minister, Benjamin Netanyahu. Schabas has, among other things, publicly described the Israeli leader as “the greatest threat to the survival of Israel.”

Past statements such as this one has supporters of Israel combing through YouTube and Google in search of other damning comments to reinforce the claim that Schabas’s partiality should disqualify him from judging Israel’s actions.

In response, Schabas, who now resides in London, where he teaches at Middlesex University’s law school, told the Forward in an August 14 interview, “I don’t think there is a person in Israel or in the U.S. or for that matter on the planet who doesn’t have opinions, perhaps quite strong opinions, about the situation in the Middle East.” But he stressed that this would not impair his judgment. “I wasn’t made the chairman of this commission because of my opinions, and I intend to park them at the door.”

No one challenges the Canadian’s raw legal expertise. When Schabas was invited to lecture in 2004 at the United States Holocaust Memorial Museum in Washington, Jerry Fowler, the founding director of the museum’s Committee on Conscience, introduced him as “the world expert on the law of genocide and international law.”

“He wrote the book on it,” said Fowler in his introduction. “He has thought very deeply about the historical underpinnings of genocide in international law.”

But even if Schabas had no prior views, his investigation would have faced deep suspicion from Israel. That’s because the body that is sponsoring it, the U.N. Human Rights Council, has been widely perceived both in Israel and in the United States as harboring a long-standing anti-Israel bias.

Schabas, interestingly, agrees with this criticism.

“Let’s just say that it’s a plausible complaint that maybe Israel has gotten a lot of attention at the Human Rights Council, but at the same time it has perhaps had a lot of inattention at the Security Council, so the double standards work in both directions for Israel,” Schabas said.

The previous Gaza inquiry commission the council set up, headed by the South African judge Richard Goldstone, accused both Israel and Hamas, the Palestinian group that rules Gaza, of war crimes after Israel’s 2008 military incursion there. The Goldstone commission also accused Israel of intentionally targeting Palestinian civilians. But the United States blocked moves in the U.N. Security Council to act on the Human Rights Council’s report.

Supporters of Israel have played an important supporting role in the public relations offensive against Schabas’s August 11 appointment. The Anti-Defamation League portrayed the inquiry as a “farce,” and lawmakers on Capitol Hill took a break from their summer recess to roll out legislative moves against the commission. New York Senator Charles Schumer, in a strongly worded letter to Samantha Power, the American ambassador to the U.N., called on the administration to pull out its $1.5 million annual funding of the human rights council if Schabas is not removed. Funding from the United States accounts for 22% of the council’s budget.

In one of his most provocative Israel-related statements, Schabas cited Netanyahu as his favorite candidate to see “in the dock of an international court.” In multiple media interviews following his appointment, Schabas argued that the comment, which is viewable on YouTube, was taken out of context. The comment came in the midst of a lengthy discussion about complaints that the International Criminal Court focuses primarily on African leaders while ignoring others. “I didn’t say he was guilty of anything,” Schabas told the Forward, referring to Netanyahu.

But Israel’s greatest concern about the Schabas commission is not Schabas himself, but about how changed circumstances since the last Gaza war may produce a different result this time if the commission’s findings fault Israel.

The Goldstone Report, negative as it may have been, did little to inflict any real damage on Israel, mainly because the Palestinian Authority was immersed at the time in peace talks with the Jewish state. P.A. officials consequently refrained from using the report’s findings as a basis for war crimes complaints against their negotiating partner at the International Criminal Court.

But today those peace talks are dead, and the P.A. is clearly interested in taking its case to the Hague-based court. In this context, the findings of the inquiry commission could carry much more legal weight. “The link between the work of an international commission of inquiry and the International Criminal Court much more serious” this time, said Schabas.

Aware of this threat, Israel reached out to Washington lawmakers, even as fighting in Gaza was still going on, to request that the United States block any international prosecution.

“The prime minister asked us to work together to ensure that this strategy of going to the ICC does not succeed,” New York Democrat Steve Israel told the New York Post after his meeting with Netanyahu in early August.

These efforts seem to be bearing fruit. The U.S. administration recently began to apply pressure both to the P.A. not to pursue legal avenues and on the ICC to reject calls for prosecution. An administration official involved in discussions on the issue told the Forward that America’s goal is to stop the legal action before it reaches Hague. The way to do this would be to convince Palestinian President Mahmoud Abbas that pursuing this avenue would not be beneficial for the Palestinians.

This could make the difference between the Schabas committee going down in history as a Goldstone II, with much criticism of Israel’s actions but few practical implications, and opening a new era in which reports, such as that prepared by the Schabas committee, are used as a basis for broad international action against Israel.

While taking aim primarily at Schabas, critics have also highlighted statements made by the commission’s second appointee, Doudou Diène, the former U.N. special rapporteur on contemporary forms of racism, racial discrimination, xenophobia and related intolerance. Diène has expressed views critical of Israel in the past, though he did not deal as intensely with Israel as Schabas has.

But while both commissioners have a clear record of speaking out against Israel and its policies, they’ve also done human rights work that could suggest a more complex approach to the issue.

In 2003, Diène investigated racial problems in Canada. His report, which found numerous problems of xenophobia, racism and Islamophobia, also pointed out the problems facing Canada’s Jewish community. “The resurgence of anti-Semitism and Islamophobia requires not only vigilant attention and repression, but also measures to promote dialogue between the communities concerned,” Diène wrote in his final report. The Canadian Jewish community, through several of its communal institutions, fully cooperated with Diene’s inquiry.

Schabas, who was blasted for participating in a 2012 public tribunal on Palestine that was laden with critics of Israel, was also part of a six-member “truth commission” set up by a non-governmental group called the Iran Tribunals, which investigated human rights violations in the Islamic Republic.

The tribunal examined political arrests, torture and mass executions in Iran and concluded that these human rights violations “were devised, instigated and executed (or caused to be executed) by a single central authority and as such the Islamic Republic of Iran is the only authority responsible for these acts.”

Schabas strongly rejected accusations made by, among others, Rabbi Shmuley Boteach who, in an [ad campaign charged that the Canadian was a “friend” and “apologist” of former Iranian president Mahmoud Ahmadinejad. The ads highlighted Ahmadinejad’s reputation as a Holocaust denier. Schabas stressed that his visits to Iran were all part of academic conferences. He noted that when Ahmadinejad was still in power, he presented in Iran a film about the Nuremberg trials “which was probably troublesome for the regime at the time.”

Boteach said that he stands by his depiction of Schabas. He blasted the commissioner for participating in a panel sponsored by the Iranian regime. “Either he is a collaborator with the regime or he so naïve that he’s a fool,” Boteach said. “Either way, he cannot preside over an inquiry of this magnitude.”

The Canadian human rights expert’s Jewish background has done little to mitigate attacks against him. Schabas grew up “with no religion,” to a father who was raised Jewish. His paternal grandparents were Jewish immigrants from Eastern Galicia in Central Europe who moved to New York at the turn of the 20th century.

His father, Ezra Schabas, a well-known classical musician, occasionally took his son to synagogue. The family enjoyed eating Jewish food. But that was as far as his Jewish upbringing went. “I’m not a religious person, but I’m very comfortable and proud of my Jewish ancestry, It’s part of me,” he said. “I feel very good and positive about it.”

And while Judaism does not play a rule in Schabas’s life, his family name is a constant reminder of his roots. Schabas does not know the exact origin of the name. But he and his family are sure that it comes from the Hebrew word Shabbat.

Why Israel’s Fight Against William Schabas May Be Off-Target