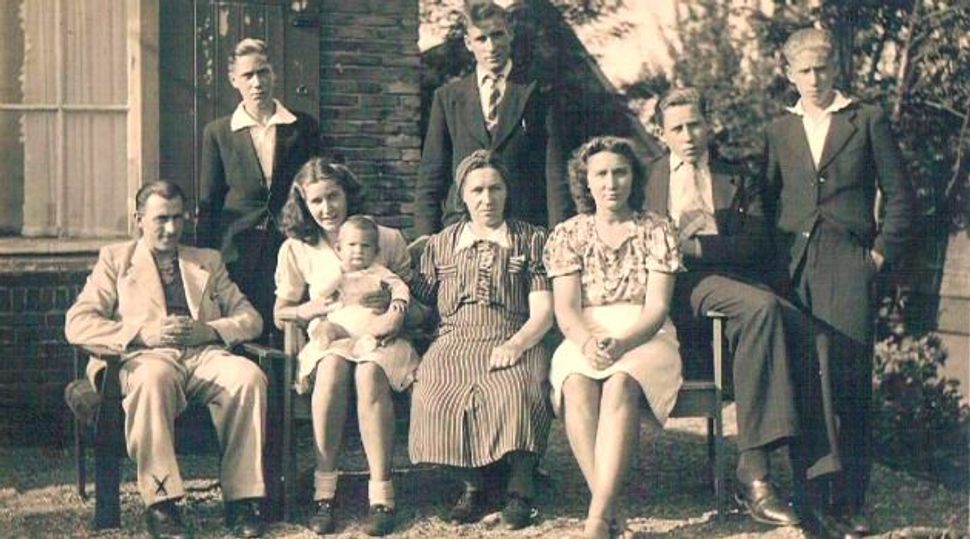 Zanoli Family: Henk Zanoli is second from right in this 1942 photo. Image by Yad Vashem

When 91-year-old Henk Zanoli protested Israel’s war in Gaza by returning the medal he’d received from the state for rescuing a Jew from the Nazis, even many of Israel’s supporters voiced some understanding: The Jewish state’s controversial bombing had just killed six Palestinian members of Zanoli’s own extended family who lived in the now devastated territory.

The 11-year-old boy whom Zanoli and his family saved passed away several years ago in Israel. But his relatives are in the forefront of those now walking a tightrope of undiminished respect for Zanoli’s courage and opposition to the views that inspired his radical act of disavowal.

“Look, on the one hand, I understand him,” said Rivka Ben-Pazi, a niece of Elchanan Hameiri, the boy that Zanoli and his family saved. “He had a family tragedy.” But on the other hand, she said, “I think he was wrong.”

The fate of Hameiri and his extended family — and their views of the action his rescuer took — form a fascinating and, at times, bitterly ironic postscript to Zanoli’s decision.

Among other things, Zanoli’s now dead Palestinian relatives in Gaza first came to the territory as refugees from the village of Faluja in what’s now Israel. Ironically, one of Hameiri’s nephews now lives on that same land, from which Palestinian villagers were forcibly expelled by the Israeli army in 1949. That village land is now part of the modern-day Israeli town of Kiryat Gat.

Israel’s reason for bombing the home in which Zanoli’s extended family members lived is unclear. Army officials have, so far, issued no public explanation. But in addition to Zanoli’s relatives, one of the individuals found in the ruins of the house has been identified as a Hamas military operative.

Zanoli’s letter to Israel’s ambassador in Amsterdam, where he returned his award on August 14, as Gaza smoldered, received media coverage all over the world.

“For me,” he wrote the ambassador, “to hold on to the honor granted by the State of Israel, under these circumstances, will be both an insult to the memory of my courageous mother who risked her life and that of her children fighting against suppression and for the preservation of human life as well as an insult to those in my family, four generations on, who lost no less than six of their relatives in Gaza at the hands of the State of Israel.”

Yad Vashem, Israel’s state museum for the Holocaust, which granted Zanoli the award, told The New York Times that Zanoli’s act was “his decision,” but added, “We regret it.”

Zanoli and his parents were part of the Dutch resistance during World War II. In fact, his father and his sister’s husband both died in the fight against the Nazis then; his brother’s Jewish fiancée was also deported. But the Zanoli family’s role in saving the young Hameiri, then known as Elchanan Pinto, was not recognized by Yad Vashem until 2011.

That [belated recognition]( ](http://db.yadvashem.org/righteous/family.html?language=en&itemId=9120199 ‘belated recognition’) was, in large part, thanks to Ben-Pazi, who came to know the courageous Dutchman while researching her family’s life during the Holocaust and after for her privately published book, “Cry of the Humble.”

Ben-Pazi asked Zanoli if he had ever been recognized for his assistance to her uncle. “He said, ‘I don’t need it, I did what I did because it is my belief.’” But she persisted. She talked with Yad Vashem, and after a two-year process, the organization designated Zanoli and his mother, Johanna Jacoba Janoli-Smit, as Righteous Among the Nations.

According to Ben-Pazi, her uncle Elchanan was born in Amsterdam to an Orthodox family in 1932. When he was 11 years old, his parents sent him to live with Zanoli, whose family they trusted because of their role in the resistance. He lived through the war with them in a town called Eemnes, about an hour northeast of the Hague.

Most of Hameiri’s family, including his parents, his brother and several aunts and uncles, died in Auschwitz and Sobibor in Eastern Poland.

But the young Elchanan Pinto lived with the Zanoli family for two and a half years. After the war, the boy was put in an orphanage. He became a Zionist and moved to Israel with a group of other young people in 1951, where he changed his last name to Hameiri. He married Leah Bamberger, and lived without children in Jerusalem until 2005, when he died from a lung ailment.

His niece Ben-Pazi remembers Hameiri as a quiet, religious man who spoke several languages and made a living translating scientific texts to and from Hebrew. “He never spoke about the Shoah,” she said.

Hameiri’s cousin, Shimon Pinto, lives in The Hague, just an hour’s drive from Eemnes, and yet he has never met the man who saved his cousin’s life. Shimon Pinto’s father, Nathan Pinto, was the brother of Hameiri’s father and the rescued boy’s sole surviving uncle. He has a survival tale of his own.

He and his wife, Sarah Pinto, were living in Amsterdam when the Nazis took the Netherlands. The couple became active in the resistance. As the Nazis’ dragnet for Jews intensified, the couple were able to use their resistance connections to acquire shelter on a farm in northern Holland. Committed socialists, they moved to Israel in 1947, after the war, and lived on Kibbutz Gal Ed, where Shimon Pinto was born in 1949.

Shimon Pinto has few memories of his cousin, Hameiri. There was a cultural disconnect between the families because Hameiri and his wife were Orthodox. (Ben-Pazi has a different explanation: “I think after he lost his family, he became closed off and it was difficult for him to keep in touch.”)

After Israel’s victory in the Six Day War of 1967, Pinto said, hippies from around the world flocked to Kibbutz Gal Ed to work as volunteers, which inspired him to travel abroad. Thanks to his background, it was simple to get a Dutch passport, and so, at the age of 21, he returned to the city his parents had fled only decades earlier. Pinto fell in love with Holland and eventually moved to The Hague, where he now lives, retired from his job as a driving instructor.

During Israel’s most recent war, in Gaza, Pinto found himself listening to Israeli radio, because, he said, Dutch radio blamed Israel for using disproportional force against the Palestinians. Even though he no longer lives in Israel, he said, he feels defensive of the state. “It is my insurance policy,” he said.

Pinto read about Zanoli returning the medal in Haaretz. “I can understand him,” he said. But he disagreed with Zanoli’s remark in his letter to the Israeli ambassador in The Hague, in which the rescuer related that after initially supporting the state’s establishment, he had come to conclude over the years that the “Zionist project” had a “racist element in it in aspiring to build a state exclusively for Jews.”

Shimon Pinto’s sister, Rachel Magen Monsonegro, is Hameiri’s only other paternal relative. She still lives in Israel, in Kiryat Gat. Reached by phone there, she said that she was unaware that Zanoli had returned the medal until that moment. She said she did not want to give her opinion about Zanoli’s decision, but added that Zanoli didn’t understand what Israelis are going through. She called the family connection a “circle.”

“Hamas wants to destroy us and he gives [the medal] back because he thinks we destroyed the Palestinians in Gaza,” she said.

A retired secretary, Magen Monsonegro has four children and seven grandchildren. Her husband, David Magen, is the former mayor of Kiryat Gat and also served in the Israeli Knesset.

Zanoli’s relatives through marriage in Gaza, the Ziadah family, originated in Faluja — today’s Kiryat Gat. A surviving member of the family, Hasan Zeyada (he uses a different English spelling of the family name) related that his parents both lived in Faluja and were forced to leave with the rest of the village’s families in 1949. In his book, “The Birth of the Palestinian Refugee Problem Revisited,” historian Benny Morris documents the Israeli army’s expulsion of Palestinians from the village soon after the 1948 war that established the state.

According to Haaretz, in the late 1990s Zanoli’s great-grandniece, Angelique Eijpe, was studying at Birzeit University on the West Bank. It was there that she met Isma’il Ziadah, an economics student from the al-Bureij refugee camp in the Gaza Strip. The two were married several years later, bringing the Palestinian family into the Holocaust rescuer’s extended family circle.

On July 20, an Israeli bomb flattened the Ziadah family home in al-Bureij. The bomb killed Muftiyah Ziadah, 70, and three of her sons, Jamil, Omar and Youssef, as well as Jamil Ziadah’s wife, Bayan, and their 12-year-old son, Shaaban.

The article in Haaretz said that a man named Mohammed Maqadmeh was also killed in the bombing. According to B’tselem — The Israeli Information Center for Human Rights in the Occupied Territories — he was a member of Hamas’s military arm.

Zeyada said he only learned of Maqadmeh’s presence in the ruins of his family’s home when he went to the hospital to learn about the fate of his relatives. He heard later that B’tselem had identified Maqadmeh as a militant but did not know how he came to be there.

A 50-year-old psychiatrist, Zeyada treats Palestinians traumatized by war. He is the brother of Isma’il Ziadah, who is married to Angelique Ejipe, Zanoli’s great-grandniece. His mother was Muftiyah Ziadah, the family matriarch, who was killed in the attack.

In his phone interview from Gaza with the Forward, Zeyada said that he “highly appreciates and respects” Zanoli. The Dutchman’s rescue of a Jewish child and his decision, decades later, to return the Yad Vashem honor after his extended family was killed, showed “congruence” in his humanity, said Zeyada.

The psychiatrist was stunned to hear that a member of Hameiri’s family now lives on land that his family once inhabited.

“I can’t imagine that the family of the child that was protected by our kin is in the same village that my family had to leave,” he said. “We left our village and they came to our village and no one can protect us now.”

When told that she lives in a city on land that the Ziadah family once inhabited, Magen Monsonegro said, “It is very difficult for me to respond to this.”

Her brother, Shimon Pinto, said the information gave him the chills. “I don’t want to know about that. It’s too painful to dig into,” he said. “You can be very sympathetic with whomever, but then you know what? When I get sympathetic with such a family, I am viewed as a traitor in Israel.”

For those still living in Israel, he said, “It is not a disaster to be viewed like that, because a lot of people are seen as traitors, but I’m not strong enough.”