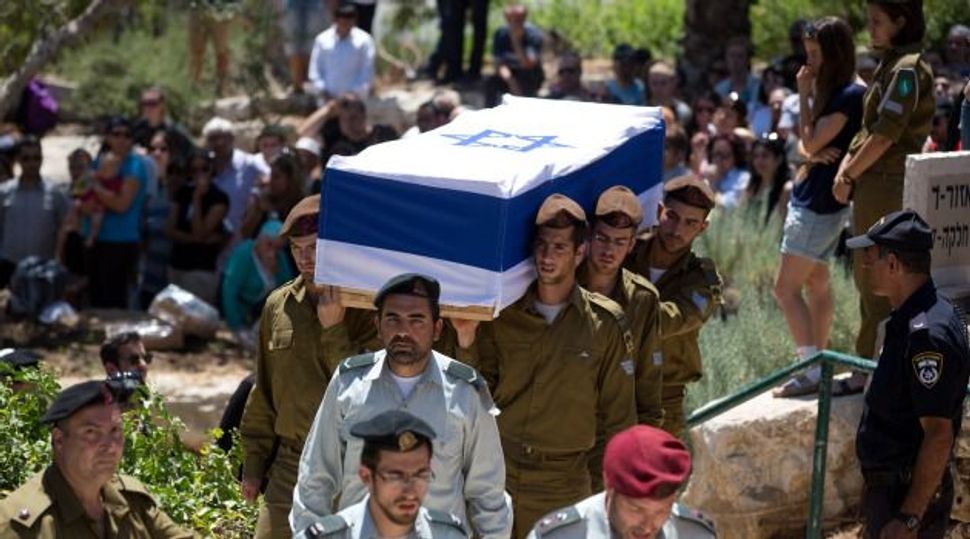 Hero or Criminal? Thousands thronged the funeral for American Max Steinberg, who died serving in Israel’s war in Gaza. But could foreigners face charges back home for aiding the war? Image by getty images

(Haaretz) — Palestinian Foreign Minister Riad Malki has sent a letter to UN Secretary General Ban ki-Moon and a number of Western foreign ministers asking them to bring to trial their citizens who serve in the Israeli army or volunteer with the military for alleged war crimes commited in Gaza.

Haaretz received a copy of the letter Maliki sent Tuesday to his U.S., British, French, Australian, Canadian and South African counterparts. In the letter, he emphasized that UN member states bear the responsibility of investigating and putting on trial people in their jurisdictions who have violated international law.

“The Israeli military currently has approximately thousands in its ranks. This total includes both Israeli dual nationals and non-Israeli volunteers enlisted through so-called “Mahal” programs,” Maliki wrote. “These dual nationals and foreign nationals participate in Israeli combat operations within the territory of the occupied State of Palestine, including the current offensive in the Gaza Strip. Additionally, foreign nationals volunteering with the so-called “Sar-El” program provide non-combat maintenance and logistics support to the Israeli occupation forces.”

The Mahal program enables young Jews aged 18 to 24 years from around the world who don’t have Israeli citizenship to volunteer for the Israeli military. They serve in combat units for one-and-a-half years, and volunteers get temporary residency status. The Sar-El program, a joint initiative of the Jewish Agency and the Israel Defense Forces, brings Jewish volunteers from around the world to Israel for a period of one week to one year during which time they volunteer with bases around the country.

In the letter, Maliki says that IDF forces have carried out a long line of war crimes in the Gaza Strip, in the past and in the current round of fighting, which has caused the deaths of many innocent civilians and the destruction of key infrastructure. Under the Geneva Convention, which all the recipients of the letter are signatories of, “States are obligated to take all measures necessary to suppress violations of international humanitarian law, including grave breaches, i.e. war crimes,” he added.

“Palestine hereby calls upon all member States of the United Nations to meet these legal obligations with regard to the potential involvement of its nationals in international crimes relating to Israel’s occupation of Palestine, including the ongoing Israeli offensive in the Gaza Strip,” he wrote.

Maliki then identified a number of steps the Palestinians want the recipients of the letter to take:

It remains to be seen how practical the Palestinian request from Western countries to investigate their citizens who served in the IDF is. There is reason to believe that most of the countries that received the letter will be reluctant to do anything about it. And even if they wanted to advance the issue, it would prove extremely difficult for them to identify and locate those individuals.

However, Maliki’s letter is another attempt to increase the diplomatic and legal pressure internationally after the Gaza operation. It was only a few weeks ago that the Palestinian Authority pushed for the establishment of a Gaza war crimes commission in the UN Human Rights Council to investigate alleged Israeli crimes during the fighting in Gaza.

In addition, the PA is holding discussions and consultations with Hamas about the possibility of signing the Rome Statute and applying to the International Criminal Court in the Hague. But despite the surge in Palestinian statements on this topic, it seems that Abbas, fearing an Israeli response and harsh international criticism, is not interested, at this time, to move further along that path.