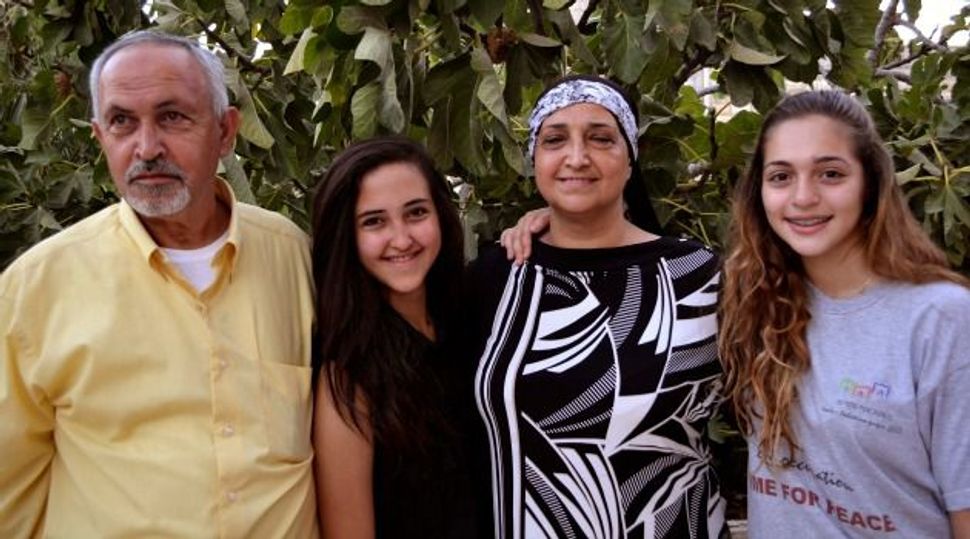 From America to Jerusalem: The sprawling Abu Khdeir family includes (from left) Issa, his daughter Shamia, his wife Hend and Sarah Awad, a cousin visiting from Virginia. Image by Naomi Zeveloff

Every summer, the Abu Khdeir family is visited by dozens of cousins from the United States. The largest family in Shuafat — there are more than 800 members — includes dozens of people who hold U.S. passports and green cards. And it’s common knowledge in this East Jerusalem neighborhood that the Abu Khdeirs speak great English.

Now, it is the Palestinian family’s American ties that have put it on the radar of the U.S. Department of State. Several weeks after Jewish extremists in Jerusalem murdered 16-year-old Muhammad Abu Khdeir, and Israeli police beat his American cousin, 15-year-old Tariq Abu Khdeir, another cousin with U.S. citizenship has been arrested. This cousin, also named Muhammad Abu Khdeir, was visited in jail by an American consular official in the middle of August.

“We are concerned that the U.S. consulate general in Jerusalem was not notified of his arrest by the Israeli government,” Marie Harf, a state department spokeswoman, told reporters in a briefing August 20. Harf also said that the Abu Khdeir family appears “to be singled out for arrest by the Israeli authorities.” The Abu Khdeirs say that more than two dozen members of the family have been arrested.

Hana Abu Khdeir, a 43-year-old mother of two in Shuafat, said that the family has been targeted for its outrage over Muhammad Abu Khdeir’s death. The Israeli authorities “want to calm us down because our kid got killed,” she said. “Controlling Abu Khdeir means controlling Shuafat.” 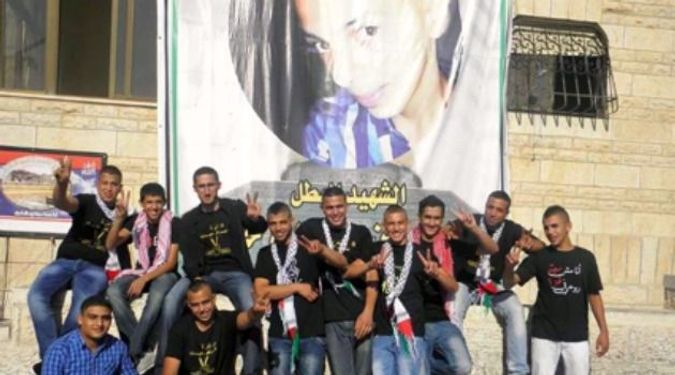 Revenge Victim: Members of the Abu Khdeir family sport shirts in support of Gaza, in front of a poster of Muhammad Abu Khdeir, who was slain by Jewish extremists. Image by Courtesy of Dimah Abu Khdeir

The Abu Khdeirs are one of five main families in Shuafat, a neighborhood in northeast Jerusalem that has become an increasingly desirable place to live among Palestinians because of its proximity to Ramallah. Most of the land in Shuafat — including the remains of the original village — is owned by the Abu Khdeir family, which operates several grocery stores on the main street. Even the muezzin in the Shuafat mosque is an Abu Khdeir.

Just as many Israeli Jews have large extended families in the United States, the Abu Khdeirs are firmly connected to their sprawling American family in the Palestinian diaspora. But unlike Israeli Jews, the Abu Khdeir family lives with the day-to-day reality of the occupation, which limits their political autonomy and their freedom of movement. (Israel annexed East Jerusalem in 1967, but the international community considers it occupied territory.) Now, the incidents that have befallen the Abu Khdeirs this summer — and the family’s response to them — have brought the family increased attention from both the Israeli police and American authorities.

The Abu Khdeir family has been in Shuafat for more than 500 years. Around 1918, Hana Abu Khdeir’s grandfather and great-uncles went from Jerusalem to Chicago for work in the railroad industry, putting down roots in the United States. Today there are around 800 Abu Khdeirs living in Illinois, New York, Maryland, Virginia, Georgia, California, Florida and beyond. Before Tariq, the most famous American family member was stand-up comic Aron Kader, who was brought up as a Mormon in Provo, Utah, and is a distant cousin of Muhammad Abu Khdeir.

After Muhammad Abu Khdeir’s burial in July, Shuafat erupted in protest. Young men clashed with Israeli police and military and destroyed parts of the Shuafat light rail station. “It was like a mini war,” said Dimah Abu Khdeir, a 26-year-old cousin visiting from Chicago. In the following weeks, according to residents, Israeli police arrested dozens of men in the neighborhood. “Most of my clients have been charged with the fact that after the killing or the burial, they came out of the houses in the neighborhood and started to throw stones and fireworks against the soldiers,” said Leah Tsemel, a Jerusalem attorney who is representing 12 Abu Khdeirs.

Among those arrested was 19-year-old Muhammad Abu Khdeir, who holds an American passport. He was born in Baltimore, where his family moved in 1992. Muhammad’s father, Issa, came back to Shuafat in 1999 to take care of his dying father. Issa — who said he served time in an Israeli jail for his involvement in the Palestine Liberation Organization in the 1980s — intended to return to the United States. But when he tried to leave, he said, he learned that Israeli authorities would revoke his Jerusalem residency permanently unless he stayed for another two years. (In 1988, Israel’s Supreme Court ruled that East Jerusalem Palestinians have “permanent residency” in the city, a privilege that can be taken away by the state.) Rather than lose his ties to Jerusalem, he abandoned his pizza takeout business — losing $70,000, he said — and moved the family back to Shuafat for good.

On July 29, Muhammad Abu Khdeir was at work at an Israeli security firm when police knocked on the door of the family home and asked for him. After his father called his cell phone, he returned home and was arrested; he has been held in custody since. According to Tsemel, Muhammad has been charged with participation in the demonstrations and with “acting with fireworks,” charges that he denies. His case is ongoing. Last year, the family said, he was detained for nine months on the charge of throwing rocks, which the family denies.

Tsemel said that the 19-year-old’s U.S. citizenship could possibly help his case. With international attention to the case, the court could be “milder” in its decision. “It will act like someone who is on the stage and the lights on him,” she predicted.

Musa Abu Khdeir, who is his 30-year-old brother and is not a U.S. citizen, was arrested more than two weeks earlier and is also still in custody. According to Issa and his wife, Hend, Israeli police came into the family home in the early hours of July 10 and asked for their son, who was also at work at the time, packaging produce at an Israeli warehouse. The couple said that the Israeli police searched their home, emptying drawers and overturning couch cushions. They confiscated two antique swords, phones and a computer. (The items were returned, except for one sword.) The family phoned Musa and he went directly to a police station. According to Tsemel, he was charged with participation in demonstrations and with throwing a gas canister back at the soldiers, who had thrown it at the protesters. He also denies participation.

On the same night, Issa said he was also arrested and held for five days before he was released. According to Hana, 25 other family members have been arrested and 15 of them are still in detention.

Israeli police spokesman Micky Rosenfeld declined to comment on how many members of the Abu Khdeir family were arrested, processed or released. But he did say that it is “incorrect and inaccurate” to say that the Abu Khdeirs have been singled out.

The Abu Khdeirs make up just a fraction of the Palestinian men who have been arrested in East Jerusalem. According to Rosenfeld, since the three teenage Israelis were murdered in Hebron in June, more than 600 men have been involved in “disturbances against the police,” suspected of attacking police officers, throwing stones and petrol bombs and “being involved in violent demonstrations.” More than 150 have been convicted in the courts; the others have either been released or are in the process of being tried in the courts.

Daniel Seidemann, an Israeli lawyer who runs Terrestrial Jerusalem, a not-for-profit focused on political and social developments in the city, said that the protests stem from East Jerusalemites’ frustration at being cut off from the West Bank by Israel’s security barrier and from Israel’s repression of political activity in their neighborhoods. “All of a sudden they are looking and seeing what Israelis receive. They see how frustrating and humiliating everyday life is. This has brought an increase in violence at a lower level,” he said. Add to that Jewish settlement construction and the Muhammad Abu Khdeir murder, and the predominant mood in East Jerusalem is, “Nobody gives a damn about us.”

A spokesperson for the Jerusalem municipality contested this characterization, and said that the city is working with local leadership to bridge gaps in East Jerusalem. In Shuafat, a new school has opened with 10 classrooms.

Meanwhile, many Abu Khdeirs say they feel unsafe in Shuafat since Muhammad’s murder, and they worry that Musa won’t be released in time for his wedding, in late October. On Eid al-Fitr, the holiday marking the end of the Ramadan fast, the family wore T-shirts saying that they would not be celebrating this year because they have a shahid, or a martyr in the family — Muhammad. They sent the proceeds from the T-shirt sale to benefit civilians in Gaza.

The American cousins, for their part, say they are struck by the turmoil in the neighborhood, the likes of which they have never experienced in the United States. Sarah Awad, a 14-year-old from Springfield, Virginia, whose mother is an Abu Khdeir, has been in Shuafat for more than a month. When she learned that Tariq, a close cousin of hers, was beaten by an Israeli police officer, she was “petrified.”

She said of the Israeli police, “Aren’t they supposed to be the people who protect us?”

Naomi Zeveloff is the Forward’s Middle East correspondent. She can be reached at Zeveloff@forward.com or on Twitter, @naomizeveloff