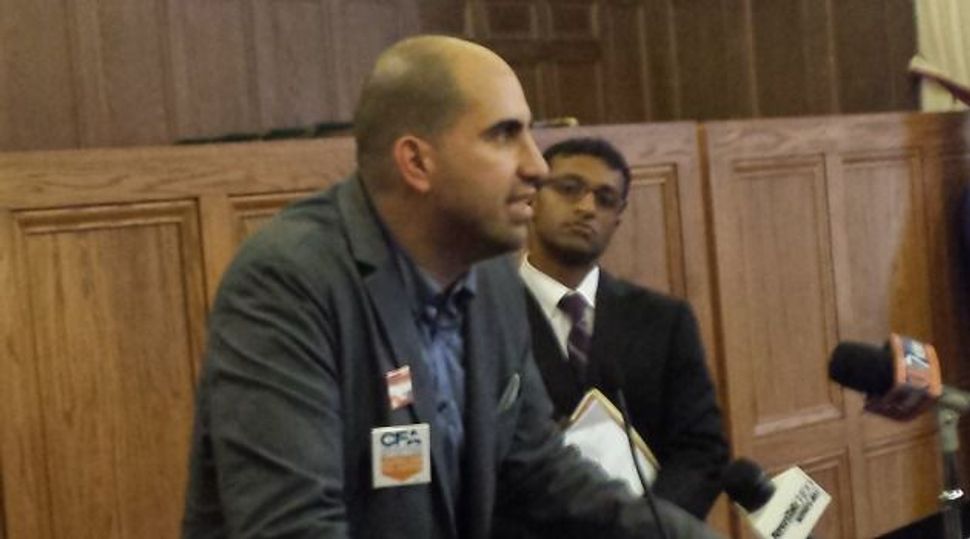 The controversial professor, whose harsh and at times vulgar postings on Israel cost him his university position, has a message to pro-Israel students who may feel intimidated by his views.

“I’ve never, ever punished a student for expressing a particular point of view or for adhering to a particular ideology and I never will,” Steven G. Salaita, who was denied a job at the University of Illinois Urbana- Champaign, told the Forward in an interview Tuesday. “The ability of my students to learn and to grow intellectually in a safe environment is paramount to my teaching and I will never have it any other way.”

Salaita’s statement came in response to claims made by Jewish students and activists, as well as campus officials, who said they feared that his hiring would make the classroom unwelcoming to those voicing views sympathetic to Israel and Zionism.

“It’s about feeling safe on campus,” said Noah Feingold, a junior majoring in environmental sustainability. “This is a professor who tweeted that if you support Israel, you’re an awful person.”

Salaita has become an academic cause célèbre after UIUC chancellor Phyllis Wise abruptly revoked his job offer to a tenured position in the wake of his controversial posts on Twitter. He spoke to the Forward by phone from Illinois after holding a press conference to demand that he be reinstated.

In the interview, Salaita sought to clarify some of his statements, but did not offer an apology. He argued that in no case should these tweets be used as grounds for not hiring him.

“I regret that [the tweets] were misunderstood and pulled out of a much larger history of tweeting and general political commentary that indicates quite strongly and clearly that I’m deeply opposed to all forms of bigotry and racism including anti-Semitism,” Salaita said.

The tweets at the center of the debate were posted in July at the height of the Gaza war.

“Zionists, take responsibility: if your dream of an ethnocratic Israel is worth the murder of children, just f–king own it already,” stated one tweet. Another suggested that Israeli Prime Minister Benjamin Netanyahu might appear on TV wearing a necklace made of teeth of Palestinian children. In a third he wrote: “Israel is rounding up people and murdering them at point-blank range. The word ‘genocide’ is more germane the more news we hear.”

Salaita defended the tweets, saying he posted them “at moments of dismay” and he argued that “in that sense the tweets serve as a useful record of a particular moment in time.” Salaita added that he’d like to get the opportunity to discuss the tweets in context “and to sort of clarify their meaning.”

UIUC offered Salaita a position as an associate professor of Indian-American history last October. He resigned his tenured position at Virginia Tech and moved to Illinois, preparing to begin work on August 16. But shortly after the anti-Israel tweets surfaced, Wise decided to rescind the job offer — not because of his views on Israel or the conflict in the Middle East, she claimed. “What we cannot and will not tolerate at the University of Illinois,” she wrote, “are personal and disrespectful words or actions that demean and abuse either viewpoints themselves or those who express them.”

Her action plunged UIUC into crisis. Faculty members, students and academic organizations slammed Wise for her decision, seen as an infringement on academic freedom. Five departments voted no confidence in the chancellor, a handful of scholars cancelled planned lectures at UIUC and several academic groups issued statements condemning the decision to “un-hire” Salaita.

The university sought to reach a financial settlement with the professor in the hope that it would bring the issue to rest, but at a press conference on campus Tuesday, Salaita made clear he is not giving up.

“I reiterate the demand that the University recognize the importance of respecting the faculty’s hiring decision and reinstate me,” Salaita told reporters and a crowd of dozens of supporters that greeted him in the pouring rain.

Salaita also spoke out against the involvement of wealthy donors in the debate, arguing that their pressure has led to the decision to rescind his job offer. “This risks creating a Palestinian exception to the First Amendment and to academic freedom,” Salaita said. “The ability of wealthy donors and the politically powerful to create exceptions to bedrock principles should be worrying to all scholars and teachers.”

Abraham Foxman, national director of the Anti-Defamation League, said that “donors give money and they expect certain things. There’s nothing wrong with them voicing their opinion.” Foxman said Salaita’s tweets “border on anti-Semitism.” The university said that the decision to rescind Salaita’s appointment was not a result of donor pressure.