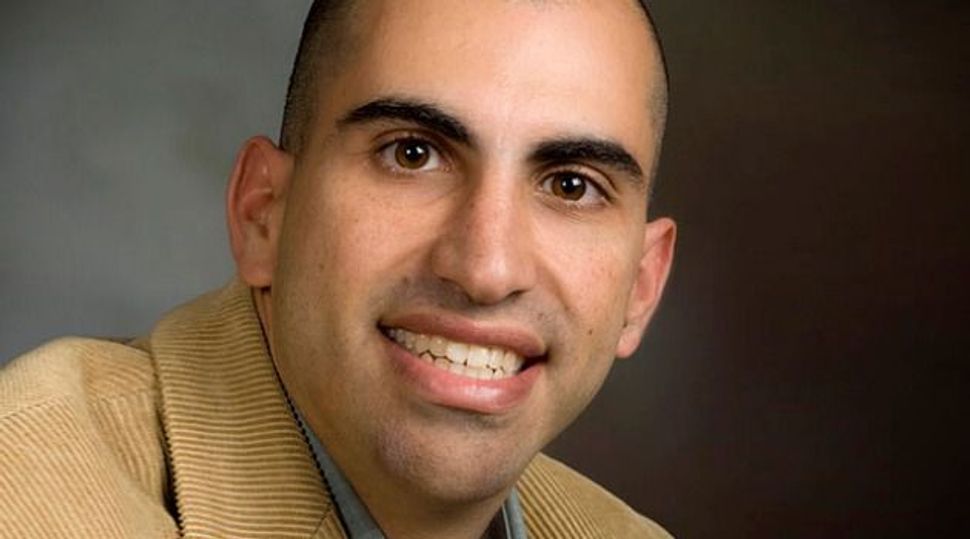 As both sides dig in their heels, an end to the crisis that has been rattling the University of Illinois at Urbana-Champaign over the hiring and subsequent de-hiring of a Palestinian American professor seems further away than ever.

Steven G. Salaita, whose job offer was rescinded after he posted vitriolic anti-Israel tweets during the recent Gaza war, made clear not long ago that he wants his position reinstated. At a September 9 press conference he dismissed reported efforts the university has made to reach a financial settlement instead. Meanwhile, at a meeting on September 10, the UIUC trustees soundly defeated a proposal to reconsider their withdrawal of the tenured position Salaita had been due to take up this semester

With the debate over the controversy brewing in university corridors, academic publications and in online discussions, pressure on the UIUC administration to reinstate Salaita has been growing. Five departments have voted no confidence in Chancellor Phyllis Wise, a handful of scholars have canceled planned lectures and events at UIUC, and several large academic organizations have issued statements condemning the decision not to hire Salaita.

It is a university’s nightmare scenario, involving almost every possible mess an academic institution could encounter: choosing between free speech and the need to maintain civil discourse; balancing academic faculty hiring prerogatives with donor pressure; defining the role of social media in academic settings; distinguishing between what’s personal and what’s fair game for professional review and treading the fine line of tenure and the protection it provides.

For Jewish students seeking to defend Israel and other pro-Israel activists, the Salaita debate also means finding the right balance between fighting anti-Israel sentiments on campus and framing the case as one that affects all students, not just supporters of the Jewish state.

“This is, as we say in my profession, a ‘teaching moment.’ We must all strive together to make the most of it,” Salaita said in a September 9 press conference.

But the teaching moment has yet to arrive. Meanwhile, it is a moment of mud slinging and of mounting pressure on both sides of the divide. Initially, Salaita’s critics led the discussion, weighing in heavily against his hiring. Now it is the university that is on the defensive, facing increasing criticism from faculty and from academics outside the university protesting Salaita’s “unhiring.”

Salaita’s relations with UIUC began in October 2013, when the popular scholar of Native American history was first offered a tenured position in the school’s American Indian studies program. Viewing the opportunity as a promotion from his current position at Virginia Tech, Salaita accepted, resigned his tenured post and negotiated the terms with the program’s administrators. The dean of the College of Liberal Arts & Sciences, of which the program is a part, also approved the hire. Salaita was scheduled to start work on August 16.

But then a series of tweets he published during the Gaza war surfaced. The tweets were not just critical of Israel, but also harsh and at times vulgar. Some critics denounced them as anti-Semitic — a charge Salaita vigorously denied.

“Zionists, take responsibility: If your dream of an ethnocratic Israel is worth the murder of children, just f–cking own it already,” he tweeted. And, “If you’re defending #Israel right now, you’re an awful human being.”

Some others were: “If [Israeli Prime Minister Benjamin] Netanyahu appeared on TV with a necklace made from the teeth of Palestinian children, would anybody be surprised?” And “Zionist uplift in America: Every little Jewish boy and girl in America can grow up to be the leader of a murderous colonial regime.”

In a September 9 interview with the Forward, Salaita expressed regret that his tweets had been “misunderstood and kind of been pulled out of a much larger history of tweeting and general political commentary.” But he did not offer an apology. His longer record of expression, he said, “indicates quite strongly and clearly that I’m deeply opposed to all forms of bigotry and racism. including anti-Semitism.

“I was tweeting from moments of dismay from what is happening in Gaza, and in that sense the tweets serve as a useful record of a particular moment in time,” Salaita explained.

Abraham Foxman, national director of the Anti-Defamation League, said that Salita’s tweets “border on anti-Semitism.” But on campus, many Jewish students sought to distance the debate from the question of anti-Semitism and to detach it from the context of Israel.

“I would like to see this as more than a Jewish topic,” said Erez Cohen, executive director of UIUC’s Hillel, which serves 3,500 Jewish students on campus. He explained that it wouldn’t be any different if a professor used such extreme words on any other issue. This, Cohen said, would create an unsafe atmosphere in the classroom, where “students are not going to be allowed to voice their thoughts.”

Noah Feingold, a junior majoring in environmental sustainability, highlighted the unwelcoming feeling Salaita’s tweets could create among students who are supportive of Israel. “I think it’s more of an issue of civil discourse,” Feingold said. “It’s not about Judaism or about Israel, it’s about feeling safe on campus.”

Salaita dismissed any claim that Jewish students would find reason to be intimidated in his classroom, or that they would not be free to express their pro-Israel views there. “Based on my teaching record, they wouldn’t have any reason to feel that way,” he told the Forward. “I never, ever punished a student for expressing a particular point of view or for adhering to a particular ideology, and I never will.”

Salaita’s supporters noted that in the years he had taught at Virginia Tech, a school with a smaller Jewish student body, no complaints were registered from Jewish or pro-Israel students.

A profile of Salaita, published September 7 in the Champaign-Urbana News Gazette, praised him for showing compassion when helping students overcome the 2007 shooting on the Virginia Tech campus.

Meanwhile, one large issue that has become part of the debate is the role of donors, some of whom are Jewish, in setting the university’s course and influencing its academic decisions.

In the days and weeks prior to Wise’s de-hiring decision, donors, students, parents and alumni, flooded her inbox after Salaita’s tweets surfaced. The university’s own fundraising development department warned Wise of the issue’s potential impact. Many of the emails were made public in response to requests from the local Illinois media.

“I as well as many other Jewish students on campus at the University of Illinois are [sic] very concerned about the hatred and anti-Israel and anti-Semitic rhetoric of Professor Salaita,” one student wrote. An alumnus added, “I am disappointed.” A mother wrote that she was “horrified” by the news of Salaita’s hire, and a donor wrote in with an unveiled threat: “Having been a multiple 6 figure donor to Illinois over the years, I know our support is ending as we vehemently disagree with the approach this individual espouses.” While names of the email authors were redacted, one, mistakenly left in, revealed that the writer was Steve Miller, a board member of the Chicago federation. Miller refused to comment on the issue.

The emails show that Wise went to great lengths to respond to alumni and donors in writing and in person. But when her decision to stop Salaita’s hire erupted into controversy, she strongly rejected claims that it was donor pressure that led to her decision.

“I think it is absolutely critical that we raise more money because the state is gradually decreasing the amount of money [we receive], but that was not any factor in my decision,” Wise argued in a recent meeting with students on the issue.

Salaita, reading a written statement at the opening of his press conference, was unconvinced. The influence of wealthy donors in the case, he said, “risks creating a Palestinian exception to the First Amendment and to academic freedom.”

The university maintains that the decision not to go ahead with his hiring was never about Salaita’s views on Israel, but rather about the way he expressed them. Salaita’s tweets, UIUC argued, were uncivil and were a form of “disrespectful and demeaning speech that promotes malice.”

Civility, however desired, has not always been viewed as a key requirement for public or academic discourse. The Supreme Court has ruled in 2011 that “debate on public issues should be robust, uninhibited and wide-open” and is protected even if it inflicts “great pain.”

At his press conference Salaita argued that “universities are meant to be cauldrons of critical thinking. They are meant to foster creative inquiry and, when at their best, challenge political, economic or social orthodoxy.”

If the case ever reaches the courts, a scenario that now seems more likely, it could produce not only a final decision on Salaita’s hiring, but also some groundbreaking rulings regarding the status of social media.

Some of Salaita’s supporters claim he should be judged not by his 140 character tweets, reflecting no more than momentary thoughts crammed into shorthand format, but by his academic writing and classroom discussions. Foxman argued that the opposite is true. Tweets, he said, are a public statement made for all to see and hear. “It’s not like saying something at a cocktail party; it’s saying to the whole world how bigoted I am,” he said.

Salaita said he would like to have a dialogue about his tweets “and to discuss their context with people and to sort of clarify their meaning.”

Another academic principle that could be defined by the Salaita case is the limit of tenure. “Tenure,” Salaita said, ”is supposed to be an ironclad guarantee that university officials respect these ideals [free speech and academic freedom] and do not succumb to financial pressure or political expediency by silencing controversial or unpopular views.”

But does it also provide protection to any form of uncivil discourse? The sides disagree on this issue. They also hold diverging views on the definition of Salaita’s job offer. Was he promised a job, or did the proposal remain tentative until approved by the board of trustees?

Facing internal and external unrest, and wishing to put the affair to rest, UIUC officials sought to reach a financial compensation agreement with Salaita, but to no avail.

Salaita made clear that his only goal is to have his job reinstated. Otherwise, he will take legal action.