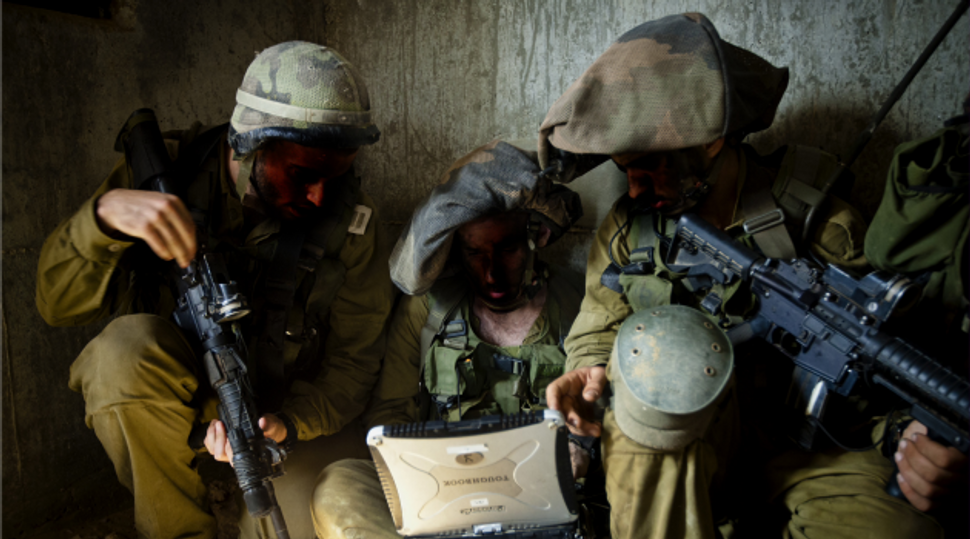 Mutiny in the Ranks: Soldiers of unit 8200 training in the field in 2012. Image by moshe shai/flash90

At a recent high-tech conference at Tel Aviv University, all eyes were on Prime Minister Benjamin Netanyahu and Defense Minister Moshe Yaalon as they took their turns in the spotlight to stress how important it was for Israel to remain at the frontlines of science and technology. But less conspicuously, two middle-aged men were sitting next to each other in the first row reserved for VIPs, listening carefully to the speakers at “Cyber Innovation: The Next Generation.”

Gen. Keith Alexander, a former director of America’s National Security Agency, and Gen. Nadav Tsafrir, the former commander of Israel’s military intelligence Unit 8200, chatted with each other avidly, and from their smiles and body language it was clear they have known each other well and were happy to meet again.

Their familiarity is not surprising. The agencies that each man headed work together closely and are crucial components of their respective intelligence communities. Their work involves intercepting communications of all sorts — phone calls, emails, fax messages, breaking into computers, bugging all forums of digital media and deciphering coded messages, ostensibly for the security of each of their nations.

But on September 12, the Israeli agency joined the NSA in another, much less desired way: like the American spy unit, which is still reeling from the revelations brought to light by its former employee Edward Snowden, Unit 8200 was exposed to a painful public unveiling.

To be sure, the cases differed in crucial ways. In the NSA’s case, a single employee, citing his conscience and his understanding of the Constitution, turned over untold numbers of the agency’s most highly classified cyber files to two journalists, who continue to comb through them, laying bare some of the government’s most guarded secrets on how the NSA snoops into the lives of millions, including many of America’s own citizens.

In Unit 8200’s case, no such wholesale exposure occurred. But simply put, one of the Israeli military’s most elite enterprises suffered a mutiny among its rank and file.

Forty-three of its reservists, including a few midlevel officers (the highest ranking is a major), sent an unprecedented letter to Netanyahu, Army Chief of Staff Benny Gantz and the current commander of the unit, who just recently replaced Tsafrir. Israeli censorship forbids disclosing his name.

In their letter, the mutineers stated that they would not carry out their assigned duties because doing so involves, among other things, listening in on the phone calls of Palestinians in the Israeli-occupied West Bank, including many who are uninvolved in violence, to gather information on their health, infidelities, sexual orientations, financial problems, sex habits and other private matters. As the mutineers noted, those nuggets of intelligence are then used to pressure and blackmail the targets, to force them to act as agents and collaborators for the Shin Bet, Israel’s domestic security service.

The forty-three letter signers also complain that information gleaned from Sigint, or signals intelligence, that they provide sometimes results in the killing of innocent Palestinians during military strikes based on that information.

Their protest shocked Israeli society and generated condemnation from across the Jewish political spectrum, including the mainstream dovish opposition.

“I’m not saying that there are no mistakes. It is certainly possible that there were,” Israeli Labor Party leader Isaac Herzog wrote on his official Facebook page. “But there are ways to complain and to ensure that such claims are examined and discussed.” Herzog is himself a former major in Unit 8200.

But even angrier were thousands of reservists and veterans of the intelligence unit.

“It’s wrong to be a refusenik in a country like Israel, struggling to maintain its democratic values in a very hostile and rough neighborhood,” Tsafrir told me.

Another former commander, Gen. Hanan Gefen, was much harsher. “If I was still the unit’s commander, I would terminate [the protesters’] service, court-martial them and ask for severe punishment,” he told me. In their protest letter, Gefen complained, “they used confidential information, which they are privy to during their service, to promote their political agenda.”

It’s not the first time that young Israelis have refused to carry out military duties by arguing that in doing so they become tools to consolidate Israel’s occupation of the West Bank. In the past, there were even air force pilots who refused to participate in airstrikes against terrorist targets because in some instances, innocent Palestinians, including women and children, were killed. So why was the controversy so heated this time?

The critics cited several reasons. Some charged that the petitioners were hypocrites. Any intelligence community, whether the CIA in partnership with NSA, or Britain’s MI6 spy agency together with its own Sigint agency, is in the business of exploiting human weakness. Blackmail, they argue, is simply, and commonly, one way to “persuade” someone in the enemy camp to become your spy.

Others claim that while the 43 refuseniks protested against the use of the controversial measures against Palestinians, they are not bothered when the same methods are applied against other enemies of Israel, such as Iran, Syria and the Hezbollah militia in Lebanon. If exploitation and manipulation are immoral, why is it so only when applied to Palestinians, these critics asked.

For the 43 dissidents, the distinction is clear: The moral problems of spying on a heavily armed sovereign country or foreign militia that seeks their country’s liquidation, they believe, are much different from spying on a civilian population that their own country occupies, controls and dominates.

“We refuse to take part in actions against Palestinians and refuse to continue serving as a tool for deepening military rule in the occupied (Palestinian) territories,” the dissidents wrote in their letter. “Intelligence allows ongoing control over millions of people…and invasion into most aspects of life. All of this does not allow for normal living, fuels more violence and puts off any end to the conflict.”

But beyond all this, what probably really touched the rough Israeli nerve is that Unit 8200 and its personnel are seen as the crème de la crème of Israeli society. It has epitomized the spirit of necessity as preached by Israel’s first prime minister, David Ben-Gurion: that to survive in the rough and hostile Middle East, the Jewish state needs to maintain its technological and scientific edge over its enemies at any and all costs.

Unit 8200 was founded on the basis of this ethos during the 1948 war that established Israel as an independent country. It has since grown into the biggest and most important organ of Israeli intelligence, even more than the Mossad, Israel’s external spy agency.

In its drive for technological excellence, the unit has managed to attract and impress the NSA. One of the documents leaked by Snowden via journalist Glenn Greenwald laid bare a secret agreement of cooperation between the NSA and Unit 8200, which was further enhanced under the respective leaderships of Alexander and Tsafrir.

It’s an agreement that has raised alarm among some American critics because, as revealed in documents brought to light by Snowden, the agreement’s terms include America’s transfer to Israel of raw, unredacted phone, email and other communications of private U.S. citizens. The American officials are nevertheless unambiguous about the counterterrorism benefits that result from this cooperation

For Israel, the significance of Unit 8200 goes far beyond the military. The notion of “Start-up Nation,” as some describe Israel’s innovation in high-tech, is also rooted in this unit.

Many Israeli high-tech entrepreneurs — some of them now relocated to Silicon Valley — did their military service in the unit, where they got their top-rate hi-tech training. The founders of Checkpoint, the second largest Israeli company traded on the Nasdaq and valued at around $15 billion, served as sergeants in the unit. Nir Zuk, the founder of Palo Alto Networks, with a market value of $6.6 billion, is another Unit 8200 alum.

This trend is so widespread that some Israelis have argued that veterans of the unit who make fortunes based on the experience and education they got in the unit should pay royalties to the state.

In this sense Unit 8200 is providing valued experience and apprenticeship to Israel’s best technological minds. This makes it a safe bet that despite the current storm, after the dust settles down Unit 8200 will continue with its traditional duties as Israel’s intelligence shield and a hotbed of technology.

Yossi Melman is co-author of Spies Against Armageddon: Inside Israel’s Secret Wars. He blogs at www.israelspy.com. Contact him at feedback@forward.com or on Twitter, @yossi_melman