In Golan Heights, Harvesting Apples Against Backdrop of Syrian War 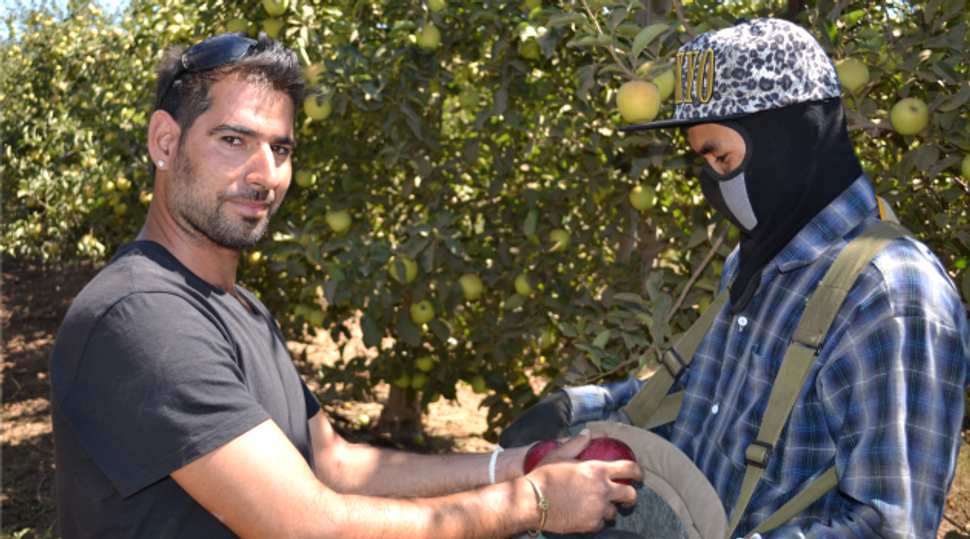 Rosh Hashanah is just around the corner, and in the Golan Heights, Israeli-run apple farms are in peak production mode, overflowing with the Starking, Red Delicious, Granny Smith, Gala and Pink Lady varietals that will grace tables set for the Jewish new year across the land.

But unlike years past, this year’s apple crop is being harvested against the backdrop of the encroaching Syrian civil war.

In late August, as Israel had just finished waging a war of its own against Hamas in Gaza, Syrian opposition fighters, including the Al Qaeda-affiliated al-Nusra Front, took control of the crossing between Israel and Syria near the Syrian town of Kuneitra. Since then, daily life in the Golan Heights has been punctuated by the sounds of rockets and mortars as the Syrian army trades fire with rebel forces.

The war has affected the lives of Jewish and Druze farmers in the territory, which Israel captured from Syria during the 1967 Six Day War. After returning a sliver of land to Syria following the 1973 Yom Kippur War, Israel effectively annexed the remaining territory in 1981. But the international community still considers it occupied. Now the Syrian civil war has crept up to the contested border, further complicating an already thorny set of issues between Jews and Druze in the Golan.

Kibbutz Merom Golan was the first Israeli farming settlement established in the Golan Heights after the 1967 War. Normally a popular High Holidays tourist destination, the kibbutz has seen a downturn in business since the Gaza war and the takeover at Kuneitra. Today, those who visit Merom Golan come to gawk at the clashes on the Syrian border, visible from an overlook at the kibbutz’s hilltop cafe, called Coffee Anan (a play on the name of the former U.N. secretary general Kofi Annan, and the Hebrew word for “cloud”).

Despite the war, the production of kiwis, cherries, nectarines and plums, and, of course, apples, has continued apace at Merom Golan — with a few hindrances. Standing on the roof of an abandoned pre-1967 Syrian military outpost just outside the kibbutz, Gabi Coneal, Merom Golan’s gray-haired agricultural manager, pointed to the kibbutz’s vineyards below, which appeared black in patches from smoke and errant mortar shelling from Syria. A few loud booms emanated from the east.

Compared to the past two weeks, Coneal said, “today is a very, very, very quiet day.” When Kuneitra was first captured, Coneal said, the Israel Defense Forces halted apple picking at Merom Golan for two days out of concern for workers in the fields. Now that the harvest has resumed, Coneal said he is looking to the future of the region. He called Israel the “frontier of the western countries” when it comes to defending the world against ISIS, the Sunni jihadist group that has taken over large swaths of Syria and Iraq. Though he wants the people of Syria to have a better life, he also hopes that Syrian President Bashar al-Assad remains in power.

“It’s something that I would have never said a few months ago, but I want the Syrian army on my border,” he said. “We know with whom we can deal.”

At nearby Kibbutz Or Tal — where one farm manager said the Druze laborers were aware of ISIS a year and a half ago — the Syrian war was also audible. Typically, “it’s like heaven between the trees,” said another manager, Ofir Blaw, as he walked through orchards covered in gauzy material, meant to protect the Golden Delicious varietal from developing sunspots. Over the past two weeks, however, Or Tal’s workers have labored to the sounds of missiles, gunshots and tank firing. An errant rocket was also found in a field. “Nobody knows who is against who, exactly: Assad, the rebels, ISIS and Jabhat al-Nusra,” Blaw said. “We know there are groups that aren’t good for us.”

Blaw manages the largest section of the kibbutz, about 700 dunums, or 175 acres, of apple, peach and cherry trees. He oversees 160 workers, the vast majority of whom are Druze or Arab. Ten of the workers hail from Thailand, and another 20 are Jewish Israelis, incentivized to work on the farm by a state stipend for post-army youth. “It’s exciting to hear our language in the fields,” he said. “It’s very patriotic.”

Blaw said that it was clear to him that the Golan Heights belongs to Israel. “You see a lot of countries become countries through occupation,” he said.

According to Blaw, the kibbutz, built in 1978, produces the “best apples in the country.” Or Tal delivers its apple crop to an Israeli company based in the Golan called Bereshit, or Genesis, which packs, sorts and markets the fruit throughout the country. In line with kosher standards, one percent of the apples are set aside as a religious offering. These are later trashed, said Blaw.

Though the Golan Heights is known as Israel’s apple basket — “like Washington State is the apple state,” Coneal said — the fruit was actually brought there by the Druze from Lebanon in the 1940s. In the 1967 war, between 80,000 and 130,000 Druze and Circassians either fled or were forced out of the Golan Heights by the Israeli army. Today, there are 20,000 Druze in four villages in the Golan, many of whom have family members in Syria. Twenty thousand Israeli Jews at more than 30 settlements also now populate the territory.

The Druze today produce about a third of all the apples grown in Israel, but their apple industry couldn’t be more different from Israel’s. 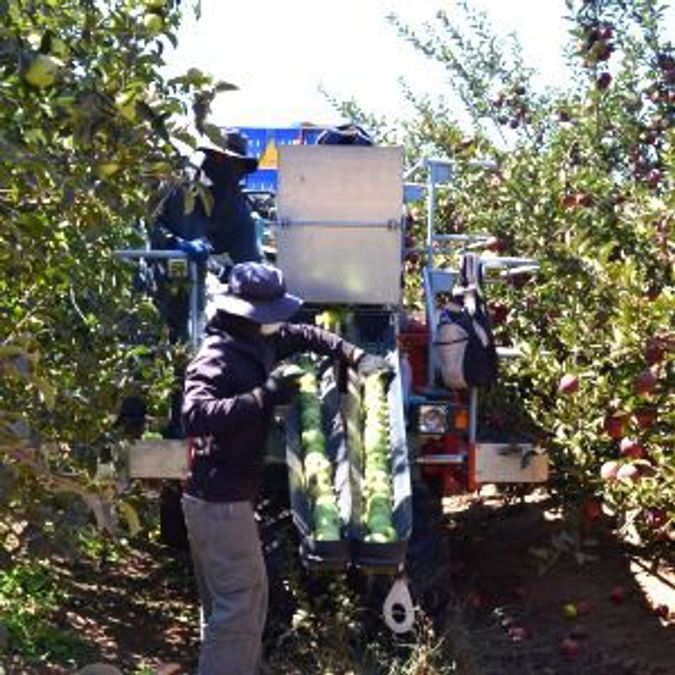 Over the past several generations, Druze farmers in the Golan have parceled out their land to their children, creating thousands of tiny orchards that are organized into cooperatives. A large Druze orchard might be just five acres, compared with the 325 acres operated by Kibbutz Or Tal. In contrast to the well-watered kibbutzim, say Druze farmers, their orchards are relatively parched. A 2013 report by Al-Marsad, a Golan human rights organization, claimed that the Israeli state water company apportions four times as many cubic meters of water per dunum to the kibbutzim as it does to Druze farms. The report based its findings on testimony from Druze farmers, including one who leased land from an Israeli farming settlement with a high quota for water consumption. The report contrasted that case to a Druze farming collective, which had a much lower quota. When asked about the disparity, Dafna Yurista, spokeswoman for the Israeli Ministry of Agriculture and Rural Development said that water apportionment is based on several different environmental factors, and had nothing to do with the ethnicity or religion of farmers.

While Israeli farms use sophisticated pesticides — Kibbutz Or Tal releases sterile fruit flies over the fields to mate with and kill off the existing fly population — Druze farms can’t afford similar treatments. The results are not only lower yields at the Druze farms, but also very different apples. While the kibbutzim grow half a dozen varietals, the Druze cultivate just Starking, Golden Delicious and Granny Smith. Their apples are also smaller, duller in color and not as sweet, in part because they are grown at a higher elevation than the kibbutz fruits. But some Druze claim the harsh conditions make for a more appetizing fruit.

“Ours have a better taste than theirs,” said Asaad Safadi, a manager at Al Shark, a company that stores, packs and markets apples in Majdal Shams, the largest Druze village in the Golan Heights.

In 2004, Druze farmers, unable to make a profit on their fruit in Israel, appealed to the Syrian government to sell apples inside Syria. According to Safadi, the Syrian government saw the proposal as a way to support farmers in what it still considered to be Syrian territory. The Israeli government agreed, on the basis that selling Druze apples inside Syria instead of in Israel would help support prices in the domestic market by preventing oversupply.

As a result, the Golan Druze have sold their fruit since 2005 across the contentious border separating two countries that remain in a state of war. It’s the only commerce that takes place between them but for a similar arrangement that allows Golan Druze to attend Syrian universities.

The Druze deliver boxes of apples to a neutral representative of the International Committee of the Red Cross, who shuttles the boxes less than 2 miles to the Syrians. Though the Druze harvest their apples in the fall, the exchange doesn’t happen until the early spring, after Syria has exhausted its domestic apple supply. According to Safadi, the Druze earn about three times what they would make in the Israeli market. Even so, many Druze who own apple orchards also work at Israeli kibbutzim in order to supplement their incomes.

Since the takeover of the Kuneitra crossing, the Golan farmers are apprehensive about the future of the Druze apple sales in Syria — the Golan Druze because of their livelihood, and the Israelis because of the competition the Druze apples would give them for the Israeli market if they were sold domestically. “Now, with the new situation at the checkpoint, I don’t know if there is someone to talk to,” Safadi said. Some Druze farmers are exploring foreign alternatives to the Syrian market, such as Russia, he said.

Meanwhile, many Golan Druze say that the Syrian civil war, inching ever closer, does not change their desire for the territory to be returned to Syria one day. Unlike their Druze brethren in Israel proper, mostly in the Galilee, the vast majority of Golan Druze reject Israeli rule and retain Syrian citizenship. The Druze in Israel, in contrast, are historically loyal to the state, and its male members enter into mandatory military service at age 18.

Though some Golan Druze have sought to become Israeli citizens since the outbreak of the Syrian war, others say they are Syrian through and through — and vocal supporters of Bashar al-Assad to boot.

“Occupation doesn’t change our citizen identity,” said Jad Al Kareem Naser, a 67-year-old apple farmer in Buqata, the second largest Druze village in the Golan. He intends to sell his apples to Syria come spring. The “human tragedy” of the Golan Druze, he said, is that they were separated from their Syrian families after the 1967 war. Kareem Naser has a sister and a cousin in Syria, as well as several male relatives in the Syrian army. “We hope to return to our leader, Bashar al- Assad,” he said.

Another Druze from Buqata, Ali Alkiesh, who manages quality control at Kibbutz Merom Golan, also said that the Syrian civil war has not changed his thinking about where he belongs, even though a relative of his was killed in the war by a car bomb. He still hopes for a peaceful transfer of the territory at some point in the future. For now, though, Alkiesh spends his days with the Israeli kibbutzniks, tending to the Rosh Hashanah apple crop.

“Here, sometimes it’s a paradox,” he said. “But because we live and cooperate, it’s ok.”

Naomi Zeveloff is the Forward’s Middle East correspondent. Reach her on Twitter, @NaomiZeveloff, or on email at zeveloff@forward.com

In Golan Heights, Harvesting Apples Against Backdrop of Syrian War