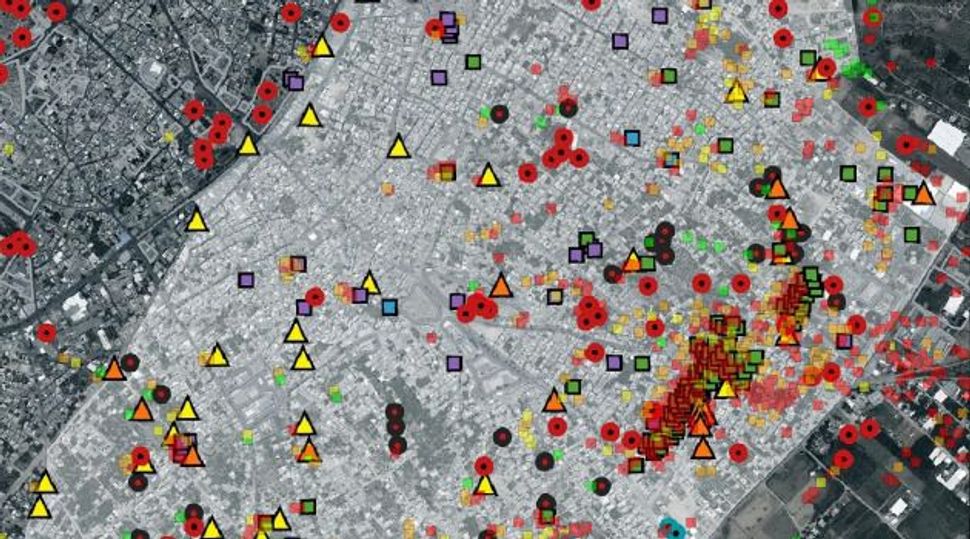 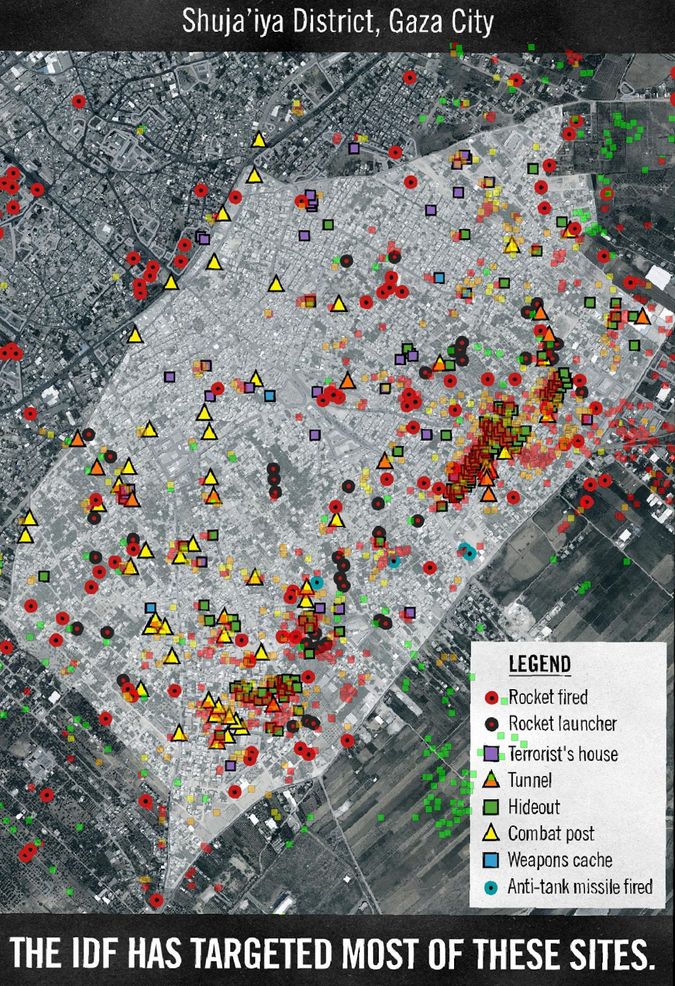 In their latest effort to rebut war crimes allegations, Israel’s defenders are seizing on a surprising tool: a collection of maps assembled by the United Nations as a guide for reconstructing the homes, institutions and, to the extent possible, lives of surviving victims destroyed by the Gaza campaign.

The maps and aerial photographs provide a detailed analysis of the destruction inflicted by Israel on Gaza during the 50-day operation known as Protective Edge. They were issued in late August by the U.N. Office for the Coordination of Humanitarian Affairs, but were not analyzed in the general media until now.

According to Dan Smith, an Israeli geographical information analyst based in Jerusalem, the atlas — produced by an agency that is usually critical of Israel —“validates Israel’s version that it attacked only Hamas targets in Gaza and that the damage corresponds with the IDF targets.”

The maps may or may not be helpful to those defending Israel’s moral conduct during the summer. But the real relevance of Smith’s analysis may be if Israel faces formal legal charges of war crimes.

That legal case relies on principles of international law that make the indiscriminate or disproportionate use of violence a war crime. And judgments on those points, in turn, depend on the ability of a combatant to show that the sites it bombed were valid military targets and that the force it exercised was proportionate to the threat they posed. A combatant must also show that it sought to minimize harm to civilians while seeking to damage or destroy those military targets.

Smith and others who have worked with him to interpret the OCHA maps noticed, among other things, that they included special markings for hospitals and power plants, and showed that Israel had not hit these.

Furthermore, according to Smith’s analysis, 72% of all damaged buildings were within 2 miles of the Israeli border. This, he believes, indicates that Israeli forces carefully chose their targets, striking mainly points adjacent to the border, where tunnels could have been dug to infiltrate Israel. His analysis also showed clusters of damaged buildings corresponding with the areas in which Israel conducted ground operations, mostly in an attempt to locate and destroy Hamas tunnels.

Perhaps most important, Smith’s analysis compared OCHA’s findings with a map that was published by the Israel Defense Forces during the war. The IDF map purports to show “terror sites” in the Shuja’iya neighborhood — one of the hardest-hit areas in Gaza. Smith’s analysis found an “uncanny correlation” between these putative Hamas sites on the IDF map and the buildings that Israel in fact eventually hit according to OCHA’s maps.

This, Smith said, demonstrates that Israel was hitting the sites it believed in good faith to be valid military targets on the basis of its best intelligence, not just bombing recklessly with no regard for civilians.

“While it is indeed upsetting that many uninvolved have been killed,” declared the right-leaning pro-Israel blog site Israellycool, for which Smith writes, “the lopsided portrayal of the ‘IDF attacks on Gaza’ is disingenuous.” The attacks, the blog concludes, “are in no way ‘random’ or ‘indiscriminate.’”

Critics, however, look at OCHA’s estimate of 2,131 Palestinians killed during the war — among them 1,473 civilians, or 70% of the total, including 501 children — as proof that Israel’s use of force was disproportionate, even given the possible presence of military targets. Israel suffered 68 deaths during the war, including four civilians, one of them a 4-year-old child. Some 500,000 Palestinians have also lost their homes because of the Israeli attacks.

“The question is not where the damage was done,” said Sarit Michaeli, a spokeswoman for B’Tselem, an Israeli organization that monitors human rights in the occupied territories, but were the attacks legal?

For Michaeli, it was obvious that the most severely hit areas would be along the border. But the primary test for judging the attacks’ legality is whether structures hit by the IDF were, indeed, legitimate military targets and whether Israel took adequate measures to minimize harm to civilians.

According to international law, Michaeli explained, a “legitimate military target” is one that makes an effective contribution to your opponent’s military effort. Hitting it must provide a distinct military advantage to your side.

What the IDF terms “terror sites” includes targets clearly in this category, such as rocket launchers and tunnels. But it also includes the family homes of militants, where IDF hits during the war frequently killed spouses and children, and other non-military locations where Hamas members, including noncombatants, gathered.

The Gaza Crisis Atlas compiled by OCHA, which is in charge of humanitarian relief in the West Bank and Gaza, contains 110 pages of detailed maps and photos of the Gaza landscape at the end of Protective Edge. The atlas was compiled using satellite imagery and by comparing the findings to previous images of the situation on the ground that were taken prior to Israel’s military campaign. It divides Gaza into 108 neighborhoods and details the damage done to each area, indicating with colored dots the exact impact, where it took place and its severity.

The report is the most comprehensive account of Gaza’s situation in the wake of the war. OCHA is one of the few agencies viewed as credible by both sides, thanks to its reputation as the leading professional agency documenting the situation in the West Bank and Gaza.

Smith’s analysis of the OCHA maps and of the legal implications of comparing them to the IDF map made its way quickly through social media and was picked up by supporters of Israel throughout the world. One media watchdog organization monitoring the British Broadcasting Corporation’s coverage of Israel used the report to make the case against what it sees as anti-Israel bias by the BBC.

The competing narratives over the conduct of the military operation matter not only in shaping Israel’s postwar public image. In coming months they will take front and center as the international community moves to investigate the claims of war crimes and indiscriminate attacks raised against Israel. In these investigations, the OCHA report could serve as a valuable piece of evidence.

Israel’s conduct during the Gaza war will be investigated by an inquiry commission set up by the U.N. Human Rights Council and could, later on, also reach prosecution in the International Criminal Court.

With the investigation now kicking off, Israel has launched a public diplomacy effort to counter the critics’ claims of war crimes and to point at Hamas as the side that threw out the rules of war during the fighting this summer. The militant group, Israeli officials say, launched rockets indiscriminately at Israeli cities and civilian centers from sites in Gaza that Hamas fighters deliberately located amid densely populated civilian areas.

Officially, Israel did not make any comment on the OCHA report and has not used the maps as a tool in the public debate. An Israeli official involved in dealing with postwar implications of the Gaza campaign said it was not clear how useful the report would be in public diplomacy because of the massive destruction it details. The official, however, did not rule out the possibility that Israel will use the findings if it decides to present its case to the Human Rights Council.

The OCHA atlas and the analysis of its findings do not provide a persuasive answer to two incidents that have provoked some of the most intense condemnation against Israel. One is the shelling on the 15th day of the operation, that killed four Palestinian children as they played on a beach within the sight of many journalists, far from the Israeli border. The location was seemingly far, too, from any Hamas military target. Israel announced in September that it had launched a criminal investigation into this incident.

The other episode involves the mass shelling of Rafah, a town on Gaza’s border with Egypt, on August 1. The intensive and sustained bombardment followed the capture of an Israeli officer by Hamas. The officer was later pronounced dead based on signs found at the scene. An estimated 190 Palestinians were killed in the Rafah attack.

Both episodes are likely be subject to UNHRC’s investigation.

OCHA’s maps clearly show the heavy damage to Rafah. But they support neither the Israeli claim that the attacks were necessary to aid ground troops conducting a search for the captured soldier while under fire, nor the Palestinian claim that it was part of a massive shelling that sought to kill the captors with no heed of the many noncombatants present.

But, as OCHA notes, the atlas was not intended for rendering judgments in such cases or on the broader question of Israel’s use of force during the Gaza war. It is, rather, “a planning tool intended to assist aid and development agencies in assessing and responding to humanitarian and reconstruction needs emanating from the conflict in the Gaza Strip,” said Hayat Abu-Saleh, the agency’s communication and information analyst.

Still, as with any report dealing with the Israeli-Palestinian conflict, this document, too, is now part of the political debate.