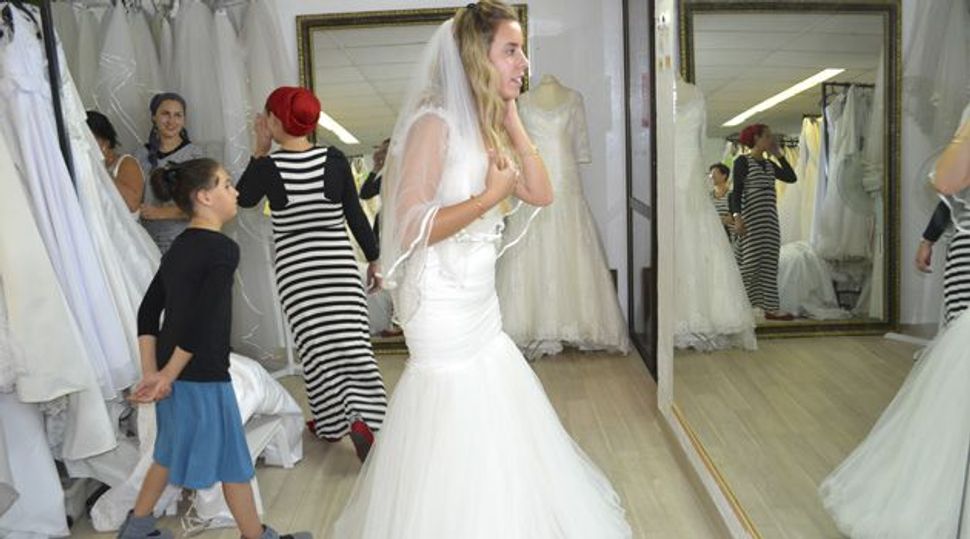 Wedding Wonder: Gal Eden tries on a wedding dress at a Jerusalem charity catering to brides-to-be. Image by naomi zeveloff

Ally Betech would have never predicted that her trip to the chuppah would include a detour down a Jerusalem alleyway and into the fluorescent-lit basement of a bomb shelter. But that is where the Modern Orthodox 24-year-old discovered the wedding dress of her dreams: an embroidered ivory gown that covered her upper arms and collarbone — for just $300.

That Jerusalem bomb shelter is home to Chasdei Yaela Bridal Gown, the largest wedding dress g’mach, or religious charity, of its kind in Jerusalem. (G’mach is short for gimilut chesed, the Hebrew term for “acts of kindness.”) The salon was opened 10 years ago by sisters Naomi Tuch and Racheli Nicholas after an aunt in Atlanta shipped them 20 wedding gowns she bought at a yard sale. Today the pair receives donated wedding dresses from all over the world and rents them for just a few hundred dollars, a fraction of the price of a new dress in Israel. Betech said that visiting the salon saved her family thousands of dollars and also allowed her to refuse the services of a dressmaker, whom she said didn’t understand her particular modesty requirements. “Everyone said it was amazing, a beautiful dress,” Betech said. “I didn’t want to lie. I found myself saying, ‘It was only 1,000 shekels!’”

Chasdei Yaela is a business, but it’s also a way for Tuch and Nicholas to engage in hachnasat kallah, literally “bringing in the bride,” one of the highest forms of charity in Jewish tradition. In fact, Chasdei Yaela and g’machim like it are just one component in Jerusalem’s sprawling apparatus to propel needy Jewish brides toward their wedding day. In addition to bridal salons, there are charities that donate thousands of dollars in cash or home goods to newlyweds. Individual Jews also chip in, collecting money or donating time or services, all in the name of helping betrothed women.

Brides are a focal point for charity in Israel, and not just because weddings are so costly; they also inhabit an elevated status in Orthodox Jewish society. On her wedding day, a bride is said to enter a heightened spiritual state with the ability to bless those around her.

Being a bride is the “most important job in the world,” said Judy Raizal Brodt, a kallah teacher in Jerusalem who prepares women for marriage. Jewish brides birth Jewish babies, thus ensuring the continuation of the Jewish people, an incentive for the community to rally around them, she said. After the wedding, it is up to a Jewish woman “to make sure that her children and husband continue to learn Torah,” Raizal Brodt said. “So in order for her to be in that role, she has to be a Jewish bride.”

The tradition of hachnasat kallah dates back to ancient times, according to Joseph Isaac Lifshitz, a professor of Jewish philosophy at Jerusalem’s Shalem College. Charity organizations for Jewish brides existed in Poland 300 years ago. The g’machim in Israel, on the other hand, are a relatively recent invention. As the ultra-Orthodox community in Jerusalem has grown larger and poorer over the past several decades, and as the cost of living has risen, the community has rallied around its vulnerable members.

In addition to the Haredim and other Orthodox groups, Israel’s baal and baalat teshuva or male and female returnees to Judaism, use the g’machim. In many instances, these newly observant Jews came to Israel alone and don’t have the financial support of their secular families abroad when planning their Israeli weddings.

In Israel, the mission of helping Jewish brides sometimes has an ideological twist. One of the most popular g’machim in Jerusalem, for instance, is run by Christian Friends of Israel-Jerusalem, a Christian Zionist organization that believes the establishment of modern-day Israel is part of Christian biblical prophecy and opposes a Palestinian state. Known for its tastefully appointed showroom and large selection of accessories, the Christian Friends of Israel Bridal Salon serves Israeli-born Jews as well as new immigrants, and also provides the latter with wedding bands.

“We believe it’s God’s plan to bring the Jewish people back to Israel, and we are here to bless and to help,” said Patricia Cuervo, a Mexican volunteer at the salon. She cited a phrase from the Old Testament’s Book of Jeremiah, which prophesizes “the voice of the bridegroom and the voice of the bride” ringing in the streets of Jerusalem. Outfitting Jewish brides is “part of the restoration of Israel,” she said.

Elena Yesilevich, a 26-year-old bride from Givat Haim, near Tel Aviv, rented two dresses at the salon for her wedding in November — a poufy one for the chuppah and a slim one for the party. The refundable deposit she put down is around a fifth of what she would have paid for a dress from a boutique on Tel Aviv’s trendy Dizengoff Street.

She said that she liked Christian Friends’ mission of assisting Jews in Israel to fulfill biblical prophecy. “I don’t think it’s a problem,” she said. “I think it’s very important for Jews to be in Israel and Jerusalem.”

Another group, called Gush Katif Kallot Project, provides financial support and home goods for brides who grew up in Gush Katif, the Jewish settlement bloc in Gaza that was evacuated by Israeli government order in 2005. Started by a group of American immigrants, the project has donated to more than 1,000 couples. The organization gets its tax-deductible status in Israel and the United States by registering through Yad Eliezer, a large Israeli charity supported by a Brooklyn-based organization called American Friends of Yad Eliezer, which also has an adopt-a-wedding program for needy couples.

“The brides and grooms that we are showering were the teenagers and pre-teens during the ‘expulsion.’ I’m sorry that is a loaded term, but that is how we feel,” said Gush Katif Kallot Project’s Lisa Goldenhersh, who was an anti-disengagement activist. “We felt like measure for measure, their homes were destroyed, so we want to try to help them build homes. What better way to build homes then to help a chatan [groom] and kallah.”

The Gush Katif Kallot Project coordinates with a g’mach in Har Nof, a large Orthodox neighborhood in West Jerusalem made up of mostly Anglo immigrants. On a recent Sunday, Davir and Lidor Tsfira, a recently married couple from Ashkelon, met Goldenhersh outside the g’mach. Goldenhersh pulled plastic bags full of jewelry from her purse and told Lidor to pick a piece. She chose a gold-colored watch. Then the couple was allowed inside the g’mach to pick up their bounty: $1,000 worth of kitchenware and bedding. The only criterion for receiving the donation, which also includes a check for several hundred dollars, is prior residence in the settlement. Davir said he learned about the charity from a friend. He grew up in Gush Katif and left at the age of 18. He did not know how much money his family received from the government in compensation, but he said that the settlers were given “very little.” (In fact, the Israeli government gave each Gush Katif family several hundred thousand dollars, compensating them based on various metrics.)

The Har Nof g’mach, called Yad Gittel, is also open to other brides, whose needs are assessed based on what they paid for their dresses and venues. “That gives us an idea of how needy she is,” owner Sonia Cohen Turgeman said. “If she paid a lot of money for her wedding gown, she can come buy things. But if she gets married in an expensive hall, be my guest but she is not a needy kallah.”

At Chasdei Yaela, Tuch and Nicholas don’t investigate the financial situation of their customers. Some brides, they say, come to them scrambling for a new gown after they’ve already ordered an inexpensive one online, only to realize it’s the wrong dress for the occasion. “They come here a few days before their wedding, freaked out. Thank God we have so many,” Nicholas said. “Then they donate the junky Chinese dress.”

The sisters have seen religious brides and secular brides, pregnant brides and even twin brides marrying twin grooms. For truly desperate brides, like one marrying her fiancé in prison, the sisters open up the “free room,” full of less-desirable dresses as well as gowns whose donors ask that they be rented without charge.

On a recent Monday, Hadara Alexander, a 32-year-old from Tel Aviv, arrived at Chasdei Yaela with her mother, Yardena Alexander, and her future mother-in-law, Yardena Shimon. After chatting with the trio for a moment, Nicholas and Tuch got to work, selecting long, sleeveless gowns for Alexander from the hundreds of white and cream dresses hung throughout the g’mach.

Alexander wasn’t ready to commit. But she knew she’d rather rent than buy. “It’s expensive to pay for a wedding dress,” she said, adding that the family was planning to spend almost $20,000 on the wedding. “I can save the money for a house or a honeymoon or something.”

She tried the gowns on, scrutinizing herself in the mirror as the two mothers took photos with their iPhones. Alexander’s mother was partial to one with a mermaidlike bodice, but the bride insisted it was too fancy.

“It’s usually easier if you don’t come with your mom,” Nicholas whispered.

Naomi Zeveloff is the Forward’s Middle East correspondent. Reach her at zeveloff@forward.com or on Twitter, @naomizeveloff