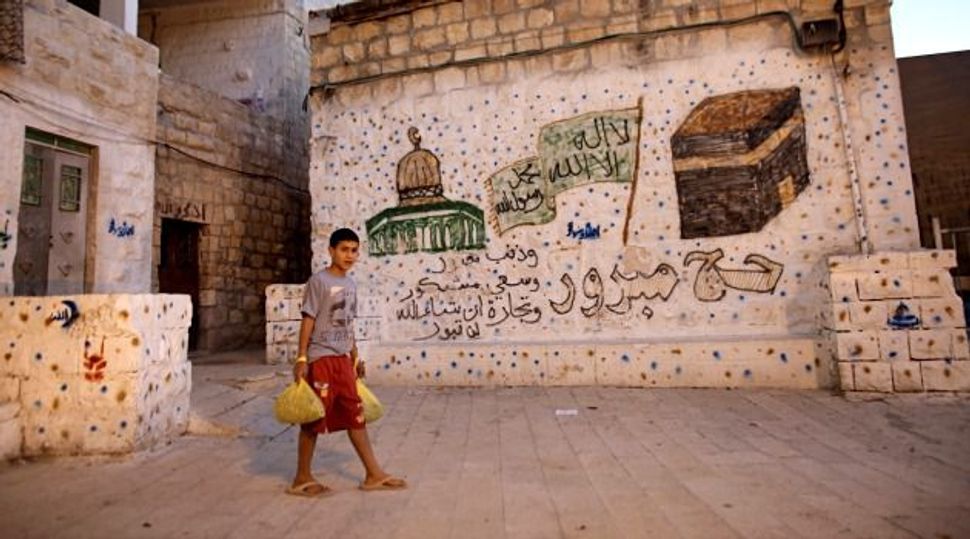 Property Dispute: A Palestinian boy walks past a building in East Jerusalem that was recently purchased by Israeli settlers. Image by Getty Images

When Marc Ginsberg heard recently that the settler group Ateret Cohanim had taken possession of two properties in East Jerusalem and evicted its Palestinian tenants, the former Clinton administration official saw it as one more sign of a crucial flaw in… U.S. tax policy.

As it turns out, American donors receive tax breaks to fund these Israeli settlers.

In the view of Ginsberg — a self-described Zionist who served as America’s first-ever Jewish ambassador to an Arab country — Ateret Cohanim’s action was another sign that the U.S. government should take action to stop this flow of funds.

But Ginsberg’s call to block tax-exempt donations to Israeli Jewish settlements in the occupied West Bank has received a lukewarm response, even from dovish Jewish groups.

In an October 15 piece in The Huffington Post, Ginsberg argued that the Obama administration could block many such donations by simply enforcing existing IRS regulations.

In his piece, Ginsberg, who was an aide to Senator Edward Kennedy and a Middle East policy adviser to President Carter, urged the administration to “give a green light to its agency officials to begin turning the screws to these American subsidizers of Israel’s illegal settlement operations.”

But J Street, the dovish lobbying group, was noncommittal when asked to comment on Ginsberg’s proposal.

The group supports “a thorough review of what concrete steps” the administration can take “to give meaning to its opposition to Israeli actions that undercut the prospects for a two-state solution,” said Jessica Rosenblum, the director of communications. But J Street does not currently advocate for yanking tax exemptions for groups that back West Bank settlements as part of its agenda, she said.

Americans for Peace Now, which supports a two-state solution and is a harsh critic of Israeli settlement activity, expressed its long-standing view that going after tax exempt groups is ineffective.

APN spokesman Ori Nir, said that “it is the government of Israel that decides to build and, and it is the Israeli taxpayer who foots the bill for this destructive policy. The pressure to halt settlement activity should therefore be focused on the government of Israel.” Nir added that shining a light on private American funding, while part of the pressure, “should not divert efforts from trying to curb Israeli government policies.”

The issue of tax breaks from the United States for Israeli settlement activity is not new, but in the past it was raised mostly by activists on the left margins, at times in connection with calls to boycott Israel or to cut foreign aid. Ginsberg, who served as President Clinton’s envoy to Morocco from 1994 to 1998, described himself as “as Zionist as they come.” He hails from the liberal mainstream and strongly opposes the campaign to boycott, divest from and sanction Israel, or BDS, as the movement is known.

Currently, the former envoy serves as CEO of OneVoice, a group that supports a two-state solution to Israel’s occupation of the West Bank. He believes that ending tax exemptions that support West Bank settlements should be part of the mainstream peace camp agenda.

“I’m sure that given the environment, people will say, ‘Hold it, we can’t support this; it’s just one step down a slippery slope,’” Ginsberg told the Forward. But in his Huffington Post piece he noted that Israel itself ended a decade ago tax breaks devoted exclusively to settlement building. “So, here we have American nonprofits funding what Israeli law prevents Israel’s government from doing itself!!!” he wrote.

Ginsberg cited in particular charities that raise money for paramilitary purposes, land purchases and the promotion of political causes as groups in violation of IRS regulations. Those regulations, which exempt charities from taxation and grant tax deductions to those who donate to them, define charities as groups devoted to “relief of the poor and distressed or underprivileged; advancement of religion; advancement of education or science; erection or maintenance of public…works; the lessening of the burdens of government [or] promotion of social welfare.”

IRS rules also state that such groups are eligible for tax exempt charitable status “only if all members of the community are eligible for direct benefits.” Many of the charities Ginsberg targets restrict the benefits they offer to Israeli Jews.

In his Huffington Post piece Ginsberg cited one group called Amitz Rescue and Security, which he noted, “has raised money through two Brooklyn nonprofits” to train and equip guard units for settlements. “Its website encourages donors to ‘send a tax-deductible check’ for night-vision binoculars, bulletproof vehicles and guard dogs,” he wrote

The IRS did not respond to a request for comment on its enforcement of charities law.

Rabbi Jill Jacobs, executive director of T’ruah, an organization of rabbis who support human rights issues in Israel, the occupied territories and in America, sees tax-deductible contributions to charities that support the settlements as a problem of donor education rather than of government enforcement. She cited the success of T’ruah’s 2011 campaign to stop Jewish National Fund from evicting a Palestinian family in East Jerusalem.

“People told me they took down their JNF box and that they understand they need to be more conscientious with their money,” Jacobs said. “It’s important to teach American Jews that if we want to be serious about peace, we need to put our money where our mouth is.”

Jacobs recently published a column in The Washington Post arguing that some of the most provocative settlement activities are carried out thanks to tax-deductible contributions that Jews give to American charities.

A New York Times investigative report from 2010 found that more than $200 million in tax-exempt money was directed over the past decade to West Bank settlements. Most charities fit the criteria set by the IRS, but millions of dollars were funneled to other causes.

A broader question relates to the use of American tax-exempt funds for any purpose in the West Bank, since this effectively means that the U.S. Treasury is subsidizing, through these tax breaks, development of settlements that successive administrations have identified as an obstacle to peace. Nevertheless, experts argue that it is not clear whether the mere fact that a charity supports causes that are opposed to administration policy is enough to constitute a violation of the tax-exempt status.

This lack of clarity has contributed to the reluctance of dovish American Jewish groups to adopt Ginsberg’s call to stop tax breaks for charities giving money to the settlements. Some fear that tying tax exemption to specific policy issues could backfire when the administration changes and priorities shift, eventually turning tax exempt status into a political tool. Others oppose taking on the issue because they fear it will be seen in the context of the anti-Israel boycott movement and of attempts to cut American aid to Israel.

Ginsberg argues that going after tax-exempt and tax-deductible contributions to Israel’s West Bank settlements can at least curb their rapid growth. As head of OneVoice, Ginsberg, who lived in Israel as a child and is fluent in both Hebrew and Arabic, frequently meets with groups of young Palestinians who support the idea of peace with Israel. According to Ginsberg, they invariably raise the issue of Jewish settlements and how their expansion is making travel and movement in the West Bank unbearable.

“I’m trying to find a way to make it easier for young Palestinians to support a two-state solution,” he said. “These are people who are concerned about their day-to-day lives.”