Federations Gather To Network, Organize Fret and — Of Course! — Shmooze 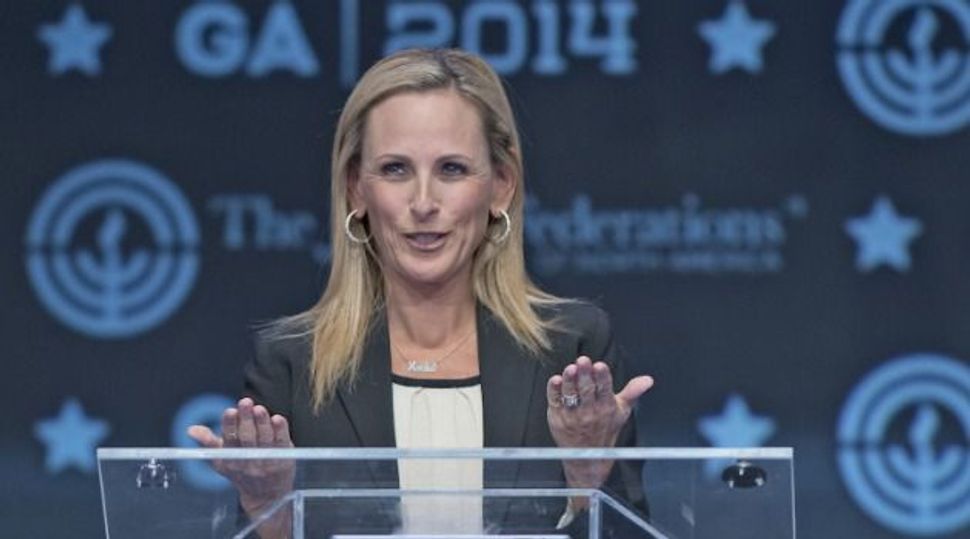 (JTA) — There was the vice president of the United States, two Supreme Court justices and an Academy Award-winning actress with a compelling Jewish story.

The Israeli prime minister appeared via satellite from Jerusalem.

Part pep rally, part training and part family reunion, this week’s annual General Assembly of the Jewish Federations of North America drew some 3,000 people to a conference center outside Washington to cheer federations’ philanthropic work, listen to presentations ranging from European anti-Semitism to crowdfunding, and to schmooze.

As usual, much of the talk at the General Assembly was how to bolster North America’s 153 Jewish federations.

“We can go beyond exchanging ideas to actually exchanging services,” Jewish Federations CEO Jerry Silverman said in a speech at the closing plenary. “JFNA expanded the resources of our consulting and community development department, but what if we also leverage and share the resident expertise in this room and across our federations?”

The federations face an uphill battle at a time when studies show younger American Jews are less affiliated than previous generations with Jewish institutional life and less likely to give to Jewish causes — let alone clearinghouses like Jewish federations.

Though federation annual campaigns are up by about 7 percent compared with this time last year, the number of federation donors has declined by about one-third since 2000, according to the sociologist Steven M. Cohen of Hebrew Union College-Jewish Institute of Religion. Meanwhile, last year’s Pew Research Center survey of U.S. Jews found that 43 percent of non-Orthodox Jews ages 30-49 donate to Jewish causes — in contrast to their counterparts ages 50–69, some 60 percent of whom give Jewishly.

At the conference, the answer to these trends was twofold. One, organizers showcased dozens of federation programs that are piloting new models for programming and outreach. Billed by organizers as “fedovations” — a mashup of the words “federation” and “innovation” — they included case studies in reaching younger donors, providing services to the elderly, planning profitable events, and finding ways to engage and excite unaffiliated community members. Jewish Federations plans to share these success stories in a federation-wide online database to be deployed in the coming weeks.

The second answer was for federation leaders — and some of the plenary speakers from outside federation, including the actress Marlee Matlin — to drive home the message of the importance of collective action in the Jewish world.

“We do have the intellectual and financial potential to effectuate substantive change, but only if we work together,” Jewish Federations board chairman Michael Siegal said in a plenary address Monday. “Federations must lead this charge and convene the necessary organizations and thought leaders because, simply, we have the reach that others do not.”

Barry Shrage, the president of Boston’s federation, called Combined Jewish Philanthropies, said that while many federations are doing terrific things, the challenge for the federation network as a whole is to identify priorities and then chart a course to address them collectively.

He also dismissed concern about shrinking donor bases, saying the number of high-end donors is growing – they contribute the bulk of federation dollars – and that federations should not measure their successes by the checkbook.

“The most important thing is not to count how much money we’re raising,” Shrage said. “It’s to count how many good things we’re doing.”

Vice President Joe Biden affirmed the Obama administration’s “ironclad” commitment to Israel’s security and talked about his experience taking each of his kids to the site of the Dachau concentration camp when they were 15 to teach them about the “incredible resilience and indomitable nature of the human spirit.”

Biden also called Israeli Prime Minister Benjamin Netanyahu a “really great friend” — in contrast to the recent characterization of Netanyahu as “a chickenshit” by an anonymous Obama administration official in an interview with journalist Jeffrey Goldberg, who also spoke at the G.A.

Seeking out Ron Dermer, Israel’s ambassador to the United States, in the audience, Biden said, “Ron, you’d better damn well report to Bibi that we’re still buddies. You got it, right?”

Netanyahu, speaking to the assembly on Tuesday by video link, focused on Iran.

“Iran is not part of the solution, it’s a huge part of the problem,” Netanyahu said, referring to reports that the United States may be coordinating with Iran in their shared battle to crush the ISIS jihadist group in Iraq and Syria. “The Islamic state of Iran is not a partner of America, it is an enemy of America and it should be treated as an enemy.”

Netanyahu said such treatment should extend to nuclear talks now underway between the major powers and Iran “by keeping tough sanctions on the regime, by making clear that the international community is determined to do whatever it takes to prevent Iran from breaking out or sneaking out to get the bomb.”

He said a deal that would allow Iran a limited uranium enrichment capacity would be a “disaster of historic proportions.”

In another plenary, NPR correspondent Nina Totenberg got U.S. Supreme Court Justice Stephen Breyer to discuss the Jewish values that drive his work (tzedakah) and Justice Elena Kagan, who grew up Jewish on the Upper West Side, to reveal that she has become a duck hunter since joining the nation’s highest court.

Rabbi Jonathan Sacks, Britain’s former chief rabbi, gave a rousing plenary address about the importance of Jews’ commitment to each other despite their differences.

“I don’t need you to agree with each other; I need you to care about one another,” he said.

A late-night session featuring Goldberg and the editors of two Israeli papers, Aluf Benn of Haaretz and Steve Linde of The Jerusalem Post, was packed. Goldberg related that his conversations with Netanyahu and officials in his government left him with the impression that the Israelis plan to wait until the next U.S. president takes office before trying to rebuild ties with the White House.

The conference’s theme was “the world is our backyard,” and it included a sprawling indoor space designed like a backyard replete with patio furniture, artificial turf panels and giant dandelions. The corners featured small stages where presenters – the list included author Peter Beinart; Philip Gordon, the White House coordinator for the Middle East, North Africa and the Gulf region; and Matt Nosanchuk and Noam Neusner, the current White House Jewish liaison and a predecessor in the post – held court during mealtimes. But many of the sessions were not listed in the conference booklet and had poor turnout.

Deborah Covington, vice president for planning and allocations at the Chicago Jewish federation, Jewish United Fund, said she came to the G.A. to network with peers and hear about federation work outside of what she regularly encounters. On that count, she said, the G.A. was a success.

“The breakout sessions felt relevant to me,” Covington said. “I thought it was a particularly good conference this year.”

Federations Gather To Network, Organize Fret and — Of Course! — Shmooze