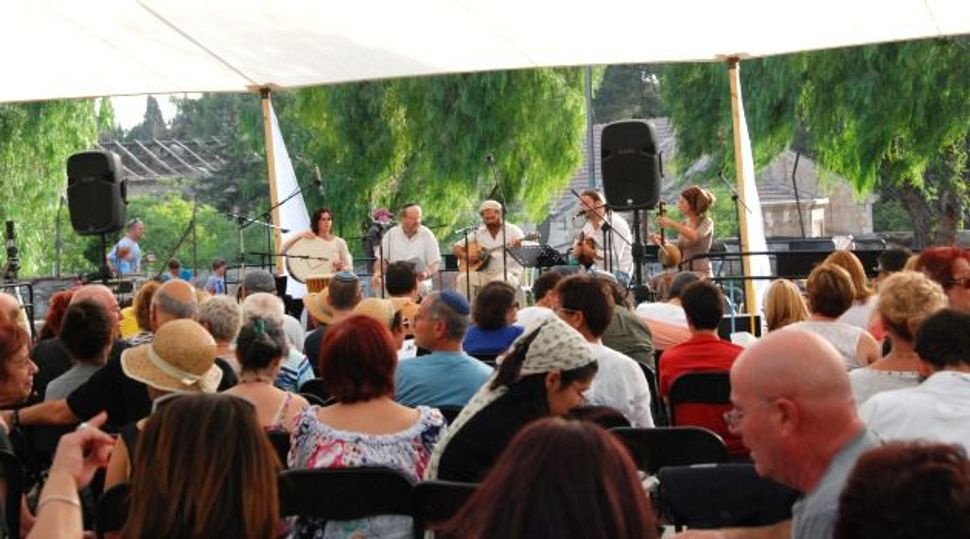 The First Station looks like a typical outdoor mall, with shops and cafes inside a renovated Ottoman-era train hub. But the year-old center, with its porous design, non-kosher eateries, and shops open for business on the Jewish Sabbath, is a subtle rebuke to two forces that have shaped modern West Jerusalem: ultra-Orthodoxy and Palestinian suicide bombing.

Now, with the return of terrorist violence to the area, it’s a symbol of what could be lost for the city’s secular Jewish residents should Jerusalem go up in flames.

Over the past six years, West Jerusalem, the city’s Jewish sector, has undergone a cultural renaissance. It’s a rejuvenation that city leaders have pushed hard for, independent of the lack of progress on a negotiated settlement with the Palestinians. Yet as portions of the city have gotten a secular makeover, predominantly Palestinian East Jerusalem — which Israel annexed after 1967, but which the international community says is illegally occupied — has only grown poorer since the end of the second intifada in 2005, when much of the fear that hovered over the city receded. The eastern sector of the supposedly unified city, where some 370,000 Palestinians comprise more than one-third of the city’s population, remains cut off from commerce with the West Bank by Israel’s security barrier and increasingly dotted by Jewish settlements.

Virtually all of the Palestinian violence over the past three weeks has been committed by East Jerusalemites. And on November 18, the attack on a synagogue in the Har Nof neighborhood that claimed five victims’ lives reached deep into West Jerusalem, leaving the city’s secular champions wondering: What will become of their efforts should Jerusalem erupt again?

“People are scared that everything we worked on won’t last,” said Jerusalem deputy mayor Rachel Azaria, one of the leaders of the movement for a pluralistic Jerusalem. “We worked so hard to create this vibrant community. I don’t think the community will disappear, but I think the vibrant colors will have some black over them.”

The movement for a pluralistic Jerusalem was born after the second intifada, which lasted from 2000 to 2005. During that tense period, Azaria said, secular Jews were so consumed with basic survival that they did not focus on the increasing Haredization of their city. Once the dust cleared, she said, many looked around and realized that there was no place for them in the Holy City, so they moved to Tel Aviv or overseas.

In the ensuing years, secular Jews who remained began a grassroots movement for inclusivity in West Jerusalem. Their campaign was made possible by the relative political calm in the city. Without worrying about the next bus bombing, said Azaria, Jerusalemites were freed up to think creatively about the future of their city. It was also easier to gather in person — especially in city parks — now that it was no longer necessary to hire security. “The fact that there was no terror had a major effect on the city,” she said. “I think when there are terror attacks, the press is full of terror attacks and there is no room for anything else. It is hard to be creative when you are worried.”

In 2008, Azaria founded the Yerushalmim party uniting secular, traditional and Orthodox residents on a social justice platform that also fought against ultra-Orthodox pressure to prohibit images of women in advertisements in public spaces. Also in 2008, secular candidate Nir Barkat beat Haredi Meir Porush for Jerusalem mayor, bringing the pluralistic movement into the halls of city government. Since then, the movement has counted several other significant wins such as changing the rules so that community councils, the equivalent of Jewish Community Centers in the United States, can stay open on the Sabbath.

Jerusalem’s secular life has been further revitalized through the construction of places like the First Station, which was built by entrepreneur Avi Murdoch. “He was born and raised in Jerusalem and as a secular Jew in the city it was very important for him to create a space that would be open and operate on Shabbat,” said Ariella Friedman, the center’s manager of tourism. Even Machane Yehuda, the iconic Jerusalem shuk, or market, that was the site of two terror attacks before and during the second intifada, is now a secular stronghold, with a few restaurants open on the Sabbath.

The movement is also reflected in real estate figures. Between 2010 and 2013, 39% of West Jerusalem housing was built in secular or observant neighborhoods, as opposed to 14% in Haredi neighborhoods, according to the Jerusalem Institute.

Yet West Jerusalem’s secular reawakening took place against the backdrop of increased frustration and despair in East Jerusalem. With access to the West Bank hampered by the Israeli security wall and other restrictions, East Jerusalemites lost a vital commercial base. East Jerusalem Palestinians are residents but not Israeli citizens and are unable to vote in national elections. Municipal neglect is evident everywhere in East Jerusalem’s Arab neighborhoods. And the Palestinians themselves cleave to a longstanding communal policy of boycotting Israeli institutions to underline their rejection of Israeli rule, but which also excludes them from a greater say in the city’s policies.

All this has contributed to the deterioration of the social fabric in East Jerusalem. Recent Israeli Jewish challenges to the sensitive status quo on the Holy Esplanade revered by Jews, Muslims and Christians; the murder of 16-year-old Muhammad Abu Khdeir allegedly at the hands of Jewish extremists and this summer’s Gaza war have only helped fuel the ongoing East Jerusalem clashes of the past several months. Since October 22, Palestinians have lashed out with three deadly attacks on Israeli civilians in the Holy City.

Israelis have been “sipping cappuccinos on the edge of a volcano,” said Daniel Seidemann, an American-Israeli lawyer who runs Terrestrial Jerusalem, a nonprofit group focused on sensitive political developments in the city. Seidemann, who is in close touch with the mood in East Jerusalem, made his comment in an interview with the Forward in August.

Itay Mautner, the artistic director of the Jerusalem Season of Culture, a summer events series launched five years ago, said he always knew that the city could erupt again. “It was too good to be true in many ways,” he said. “We know what Jerusalem is about. We know that it can burst into flames at any second.”

He said that he recently had a conversation with the program’s general manager about the future of the program in light of a possible third intifada. “I guess there is really no other option for us [but to continue],” he said. “I mean we can’t say, ‘Look, it might get worse, let’s pack our stuff and leave and go, this is a lost cause. We can’t allow ourselves to think like that.’”

Amid the more serious attacks last week, there was an incident at the First Station when a group of Palestinian youngsters allegedly threw a flash grenade outside the center. But according to Friedman, the patrons didn’t notice — they were so consumed by the concert happening inside the station’s main tent. It wasn’t until the Jerusalem police arrived that the patrons learned what happened.

“It created a scare,” she said. “That was what they meant for it to do.”

This article was updated to reflect the fact that the First Station building was built during the Ottoman period, not the British Mandate.