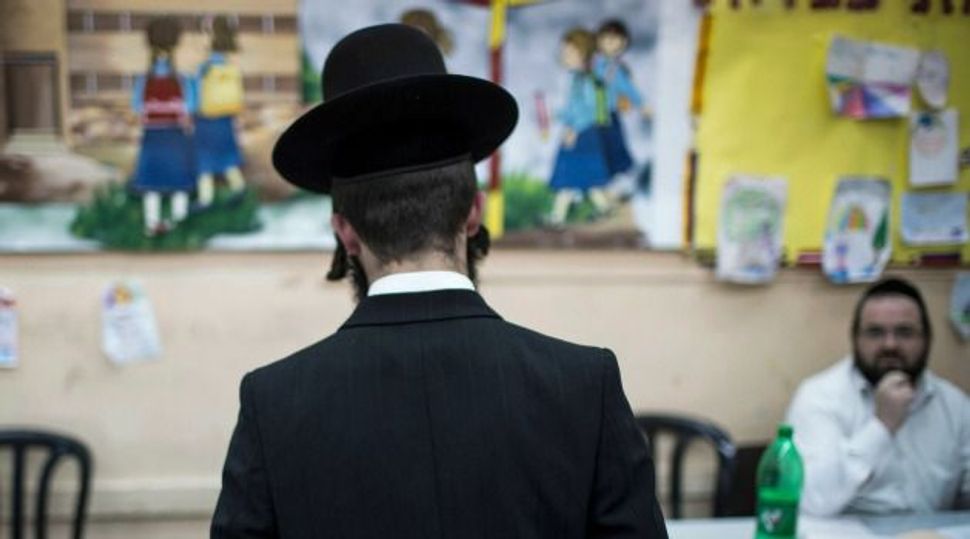 Man’s World: Ultra-Orthodox political parties are dominated by men. A group of Haredi women wants to change that. Image by getty images

(Haaretz) — The backlash against ultra-Orthodox women who are daring to demand a public voice in government didn’t come as a big surprise, but it did come swiftly and harshly.

Last week a formal campaign called “No Female Candidate, No Female Vote” was launched to pressure ultra-Orthodox political parties Shas and the United Torah Judaism party to stop excluding women from their party tickets. Their argument: In an era in which ultra-Orthodox Jewish women are already in the public realm, working as journalists, attorneys, doctors or activists, forbidding them to stand for political office makes no sense. These women, who are more often than not both the primary breadwinners in their households and the primary caretakers of the family, deserve direct representation in the Knesset.

An open letter from this group of Haredi women to the Knesset representatives of the ultra-Orthodox parties was circulated on social media, making waves over the weekend. The letter stated that they would refuse to vote for any party that did not include a female candidate — any female candidate — high enough on their tickets to have a realistic chance of winning a spot in the Knesset. The movement put out its message through a Facebook group and a crowdfunding site, and the effort received extensive media coverage.

In response, Rabbi Mordechai Blau, a senior member of the United Torah Judaism party, issued a statement Sunday threatening excommunication to any women who dare buck Haredi political leadership — and by extension, the religious authority of the rabbis who guide them.

“All women who go near a political party that is not under the leadership of the Torah sages” would find her children banned from Haredi schools and her employer boycotted by the community, said Blau.

You could practically hear the “Godfather” theme playing in the background when he warned: “Anyone who dares do this will be taken care of and will pay for it dearly.”

The statement puts Haredi women seeking government representation between a rock and a hard place. On one hand, the Haredi parties insist on remaining female-free; on the other, if they seek an alternative political home, they risk social and economic ostracism in their tight-knit communities.

Blau’s wasn’t the only hostile public reaction. In a television interview on Channel 10 show “London and Kirschenbaum,” Rabbi Benny Rabinowitz, an editor at the Haredi publication Yated Ne’eman, looked like he would rather be anywhere else when he faced off against a representative of the group, Esty Rieder-Indorsky. Insisting on switching seats on the panel because he couldn’t sit between two women, Rabinowitz argued that the current Knesset representatives of ultra-Orthodox parties already represented the community’s women as well as those women could represent themselves.

Indicating Rieder-Indorsky, Rabinowitz said: “There is no real Haredi woman who thinks like she does … A Haredi woman follows the will of the Torah and halakha [Jewish religious law]. And the sages of Israel say the will of Torah and the will of halakha says women can’t do this.”

Rabbi Chaim Amsellem, a politician who represents the more progressive edge of ultra-Orthodox spectrum, did speak out in support of the women. “It is time that Haredi women were represented in Haredi parties,” Amsellem said in a statement. Even if those parties object to putting women on their own tickets, they “shouldn’t be prevented from running on other tickets, and shouldn’t be boycotted or ostracized,” he said. Calling Blau’s remarks “stupid” and unrepresentative of the views of the Haredi public, Amsellem vowed to do what he could to “advance the entrance of Haredi women into the Knesset so they will have appropriate representation.”

While the women’s campaign has been trumpeted in the media as a new phenomenon, the truth is that it’s more of a renewed push with a sharper edge. It is part of an ongoing effort that has so far drawn lots of publicity but few concrete victories. Neither the numbers on the Facebook group — 3,600 over its two years of its existence — nor the sum raised on the crowdfunding site are particularly impressive.

In the legal and regulatory realm, attempts in court to deny the Haredi parties public funding on the ground that their exclusion of women violates the principles of equality and freedom of expression have fallen flat. Appeals to the Central Elections Committee demanding that Shas and UTJ be disqualified for running in the elections because of this were also unsuccessful.

There has also been little success in the electoral realm. A similar campaign to push the ultra-Orthodox parties into putting women on their slates took place in 2012 during the run-up to the previous elections. At the time, Amsellem stood up, as he has now, to vocally support the right of Haredi women to play a greater role in public life. More importantly, he included several women on the ticket of his own party, Am Shalem. But he was roundly defeated at the polling stations, failing to wrest a substantive percentage of the Haredi vote away from their traditional strongholds.

Similarly, in the 2013 municipal elections, women also ran into rough waters, when a pioneering “party of mothers” failed to cross the electoral threshold in the local race in the Haredi settlement of Elad. In Jerusalem’s Mea She’arim neighborhood, Haredi resident Rachel Ibenboim was pressured into surrendering her spot on the Habayit Hayehudi slate after her family was threatened with ostracism from their community.

Still, there is reason to hope. There is no indication that previous setbacks mean that the Haredi women fighting for a voice will give up. Ibenboim is one of the faces of this new push to represent Haredi women in the Knesset, as are the women who ran for office in Elad. The entrance of women into the Haredi political arena may simply be a matter of time.

Whether that time is now, though, is still an open question.