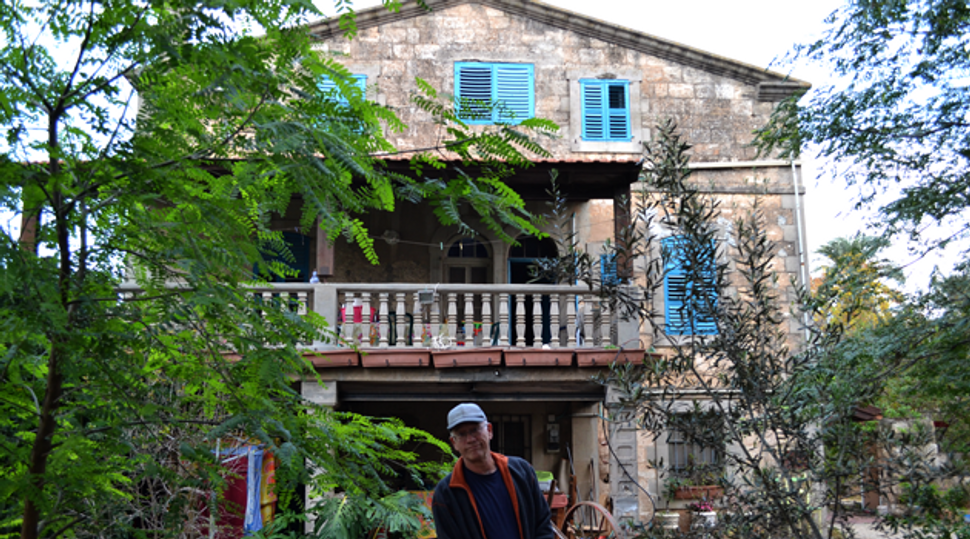 Digging into the Past: Archeologist Aviram Oshiri came to Bethlehem of the Galilee in 1992 to conduct a salvage excavation. Image by Naomi Zeveloff

Bethlehem of the Galilee is a sleepy town known for its rose nursery, its spice emporium and its early 20th-century German Templar homes built by evangelical Christians.

Unlike the Palestinian city, where Christmas celebrations have been underway for weeks, this Bethlehem projects a decided lack of Christmas spirit. Even as tourists flock to the Church of the Nativity in the West Bank, the entrance to Bethlehem of the Galilee is marked by a handwritten sign advertising a Hanukkah celebration.

But this moshav — or Israeli agricultural community — could have been the true birthplace of Jesus as related in the Gospels. According to one version of the tale told there, a pregnant Mary and her husband Joseph traveled from Nazareth to Bethlehem to register in a census in Joseph’s hometown. Yet the debate over Jesus’ birthplace is also incipient in the New Testament itself, said Aviram Oshri, an archaeologist with the Israeli Antiquities Authority.

In the Book of John in the Christian bible, a group of skeptics wonder about Jesus’ true origins in the Galilee, given that the messiah predicted in the older Hebrew Scriptures was supposed to come from the same place as King David, in the Bethlehem close to Jerusalem.

Oshri — who stressed that he speaks for himself and not the Antiquities Authority — is the foremost proponent of the idea that Jesus was born in the Galilee. He first began looking into the question in 1992, when he was sent to the town to conduct a salvage excavation ahead of construction of a new neighborhood in the area. Oshri said he had heard from the local community about the myth that Bethlehem of the Galilee was the true Bethlehem. Today he has “no doubt” that Jesus was born there. “As I dig deeper and deeper, I am more convinced,” he said.

On that initial dig and several others, Oshri learned that the town became a major site of Christian worship during the Byzantine era, as evidenced by the remains of a large church. Just as the Church of the Nativity in the West Bank was built on top of a cave where Jesus was supposedly born, this Byzantine house of worship had a cave, too. There was also a large, elaborate mosaic on the church floor, which is now part of an exhibit at Ben Gurion Airport. Oshri found other indications of Christianity on the site, such as the remains of a monastery where there was an oil press, candles with crosses and pig bones. What’s more, Oshri said, it’s clear that Bethlehem of the Galilee was a Jewish town at the time when Jesus — a Jew — was born. The proof, he said, is in another archaeologist’s discovery of a Roman-era stone workshop on the site that made implements for Jewish ritual.

Oshri compared his findings in Bethlehem of the Galilee to the city of Bethlehem in the West Bank. While there is no doubt that that the West Bank Bethlehem has long been an important site for Christian worship, he strongly believes that the area was uninhabited during the era when Jesus lived. Oshri bases his view on the fact that Roman engineers used the area for a water channel. He hypothesizes that the Church of the Nativity, which dates back to the Fourth Century C.E., was built in the Bethlehem near Jerusalem because it was already a Christian stronghold, as opposed to the Galilee, which was then heavily Jewish.

Building the church in the Bethlehem near Jerusalem would also have served to bolster the Christian claim that Jesus and David shared a birthplace, he said, thus bringing Jesus’ story in line with the Bible’s messianic prophecies.

Today, save for a rusty white sign that reads “This is a historical site, please preserve it,” there is nothing to indicate that Bethlehem of the Galilee is of potential biblical significance. Yet in recent years, the town has become a popular tourist site for Israelis for an entirely different — though no less controversial — reason: Bethlehem of the Galilee was once home to Nazis in Mandatory Palestine, then under British control.

The Templars, who sought to bring about the predicted return of Jesus in the Holy Land, set up their first German Colony in pre-state Palestine in Haifa in the mid-nineteenth century. They went on to build several other settlements, including the one in Bethlehem of the Galilee in 1906.

According to Kobi Fleischmann, who runs a small Templar museum in town, the outpost was built in what was then a small Palestinian village. The local Palestinians — there were just 132 of them — worked for the 100-odd German colonists, building the stately stone Templar homes that still stand today. When the Nazis came to power in Germany in 1933, the German Templars’ political allegiances followed suit. They even hosted Hitler youth parades, complete with swastika-bearing flags. After World War II broke out, the British shut down the Templar colonies and deported many of their inhabitants to Australia.

With the recent renovation of another former Templar settlement, the Sarona colony in Tel Aviv, Israel’s German Templar outposts, including Bethlehem of the Galilee, have enjoyed renewed interest among local tourists. But according to Fleischmann, some of the town’s residents have objected to his tourist outreach. Part of the reason, no doubt, is that many of the town’s 200 residents are descendants of Holocaust survivors who moved in after Jewish forces captured the village during the 1948 war that established Israel as a state. Today, an austere Holocaust memorial sits mere yards from the stone Templar water tank, the town’s defining architectural feature.

“They don’t like my tour over here,” said Fleischmann. On two occasions, he said, a lawyer contacted him on behalf of one woman in town who asked him not to display a Nazi-era pennant on his tour. But he sees the Nazi past as simply part of history. “I am telling the story of the Templars.”

Fleischmann saw the possible Jesus link as an opportunity for tourism, too. On a tour through Bethlehem of the Galilee, he pointed out several ancient artifacts — some from the Byzantine era church, such as a square stone plate — that were now being used as lawn decorations in front of private homes. He said that he wanted to collect the artifacts in the town square and create an exhibit about Bethlehem of the Galilee’s biblical roots. But Oshri said that this was impossible; under Israeli law any historical object claimed by a private individual before 1978 cannot be retaken by the state.

Oshri’s last excavation in Bethlehem of the Galilee was in 2003. Since then, he has tried fundraising in Israel to continue his research into the site, but he said he has few takers. At one point he put together a web site with his claims, but took it down because it yielded no donations. While his work has been published in the New York-based popular magazine Archaeology, he hasn’t had any luck peddling his findings in Israeli archaeology journals. “I have no idea why,” he said. Yaron Golani, the moshav’s new manager, on the other hand, is enthusiastic about the theory. He sees tourist potential in the story. “Even if it’s not true, why aren’t we saying that he was born here?” Golani recalled telling Fleischmann. “Let’s find some stones and make it happen.”

But the moshav’s families haven’t jumped at the idea, even though Christian tour groups enrich municipal and private coffers in nearby Nazareth. Golani said that the town is already beleaguered with Israeli tourists who come to learn about the Nazis. Meanwhile, he is consumed with other, more prosaic tasks, like garbage collection. “With my priority of daily work, Jesus is not very high,” he said.