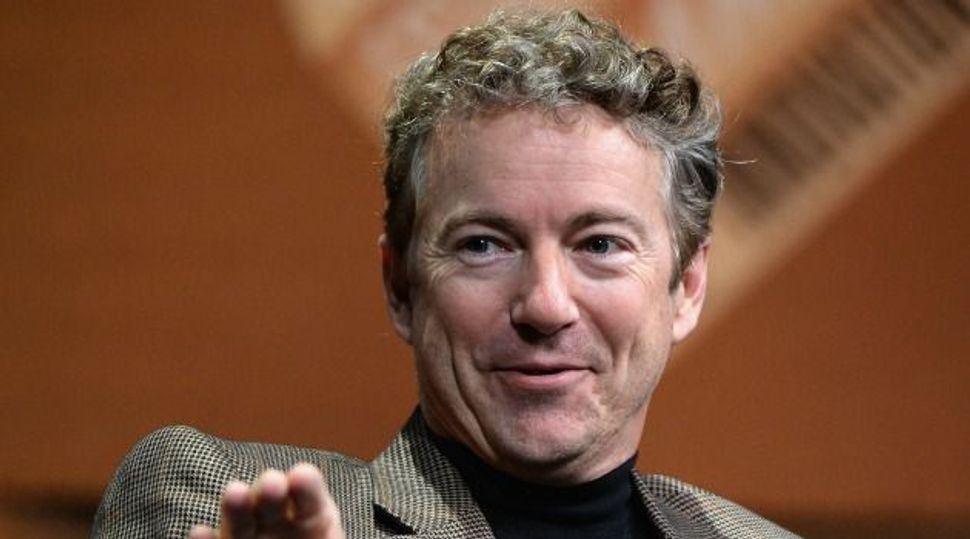 Pariah to Pareve Rand Paul is making slow but steady progress in his longshot bid to win some Jewish support. Image by getty images

For many candidates, that might not mean much. But for Paul, the O.U.’s January 6 statement, lauding his sponsorship of a bill to defund the Palestinian Authority, marked something new. Long shunned by the organized Jewish community as hostile to Israel, Paul is attaining a degree of acceptability, if not yet embrace, in at least some quarters of American Jewry.

It has been a steep learning curve for the up-and-coming libertarian. On top of his own longtime views against foreign aid to any country, the Kentucky Republican labors, justly or not, under an additional burden in the eyes of some Jews as the son of a former congressman who has been associated with anti-Semitic conspiracy theories. Yet within less than two years, the Kentucky senator has gone from pariah to pareve in the eyes of many Jewish GOP supporters. And the O.U.’s statement meant something more: a first-time nod from an avowedly nonpartisan national Jewish group. The group stressed, however, that its statement was limited only to Paul’s legislative initiative and should not be viewed as an endorsement.

Paul’s quest for a kosher stamp of approval has been long and thorough, and is still far from complete. Among other things, he has walked back, time and again, his call for eliminating aid to Israel. He has become a leading pro-Israel voice in the Senate. And last year he took a family trip to Israel and donned a yarmulke when paying visits to traditionally observant Jewish donors.

“It’s clear that he is working very hard to find points of common ground with Jewish Republicans and Jewish libertarians,” said Marshall Breger, a founding member of the Republican Jewish Coalition who served in the administrations of presidents Reagan and George H.W. Bush.

Still, even among conservative Republicans, Paul is not quite there.

“I do not believe that Rand Paul has really changed his positions,” said Ned Siegel, an RJC board member and Republican donor who served as ambassador to the Bahamas during the George W. Bush presidency. Siegel, a supporter of Florida governor Jeb Bush who is now exploring a possible 2016 run, said Paul’s newly adjusted views on Israel reflect political expediency. “The man is running for president and he’s sizing up what needs to be done,” Siegel said. “The Jewish community needs someone who was a loyal supporter of the State of Israel regardless of elections.”

Paul’s route to attracting Republican Jewish support departs markedly from the path almost every other GOP candidate travels. For others, the starting point is an established record of hawkish, security-centered pro-Israel views that will appeal to the Republican Jewish establishment. Paul, lacking these credentials, began instead by reaching out to the Orthodox and the ultra-Orthodox margins of the Jewish community, where activists are often less singularly focused on Israel when engaging with politicians who can help advance their domestic goals. From there, Paul has been seeking to work his way to the mainstream.

In June 2013, this journey took the senator to an ultra-Orthodox yeshiva in Lakewood, New Jersey, where he strolled through the learning hall, taking an interest in the Talmud studies and in the future plans of the students huddled over their books. His host was Dr. Richard “Kasriel” Roberts, a wealthy Orthodox Republican donor. “Rand Paul,” Roberts said as he welcomed Paul, “is real. He’s authentic.” Roberts also paid for Paul’s trip to Israel and accompanied him there.

This was far from Paul’s only foray into this world. In the past two years, Paul has made a point of giving interviews to Orthodox radio shows and of meeting frequently with delegations, donors and activists from the Orthodox community.

Paul comes to the Jewish community carrying an unusual amount of baggage. One of the most visible politicians associated with the Tea Party movement, Paul’s rapid rise gave him little chance to engage with the Jewish community in his home state of Kentucky or with national Jewish groups prior to his consideration of a presidential run.

His father, former Texas congressman Ron Paul, held strong anti-Israel positions and published a newsletter that, amid strong anti-gay and anti-black conspiracy theories, raised the possibility that the first World Trade Center bombing, in 1993, was “a setup by the Israeli Mossad.” Ron Paul later said that he did not write the material that appeared in his newsletter.

Rand Paul — his parents gave him his first name in honor of the Jewish-born atheist libertarian writer Ayn Rand — has no comments of this sort weighing down his own record. But his earlier stands on international affairs, described by some as “neo-isolationism,” called for reducing America’s footprint in the world and for as little intervention as possible in overseas affairs.

Most Jewish Republican donors reject this. Besides their strong support for aid to Israel, many lean toward neoconservatives in their candidate preferences and feel uneasy with a policy of international disengagement.

This uneasiness comes to a head on foreign aid. Paul has been a leading voice in the Senate for eliminating America’s financial support to other nations, calling it a misuse of taxpayer dollars. This position automatically shut him out of access to all pro-Israel circuits, which, as a matter of core principle, support a robust foreign aid policy, with Israel as one of the key beneficiaries.

The Republican Jewish Coalition, a kind of central address for most major Jewish donors to the GOP, would not give him an audience at its official functions. Perhaps more important, its leaders denied him access to Jewish casino billionaire Sheldon Adelson, the biggest donor, Jewish or not, to the Republican Party.

But Paul has proved able to internalize criticism and adjust his views accordingly. Using his position on the Senate Foreign Relations Committee, Paul adopted a strong pro-Israel standpoint, emerging as a vocal backer of the Israeli government. When war erupted between Israel and the Palestinian group Hamas in Gaza last summer, Paul attacked the Obama administration’s calls for Jerusalem to show restraint.

His approach toward foreign aid has become more nuanced. Today, he seeks to cut aid initially to countries that, in his view, oppose American interests or values, such as Egypt, because its government came to power through a military coup, and Pakistan, for its decision to imprison a doctor who helped the U.S. locate Osama Bin Laden. Israel, as he currently explains his view, would actually be better off without Uncle Sam’s $3 billion a year. But he will not be the one pushing for cutting U.S. assistance to the Jewish state.

Paul — a physician, like his father — was a practicing ophthalmologist before his election to the Senate in 2010. He also initially followed in his father’s libertarian footsteps. On his arrival to Washington as part of the Tea Party wave of that year, he focused intensely on fighting tax increases. He also became a leading critic of the executive branch’s overreach, in his view, in the realm of security and privacy. His opposition to many of the National Security Agency’s warrantless surveillance programs, to drone warfare and to the administration’s expansion of military operations without congressional authorization, has put him at odds with leaders of his own party.

Recent efforts by the P.A to bypass the deadlocked peace negotiations with Israel by turning to international bodies, first the United Nations Security Council and then the International Criminal Court, led Paul to move ahead with the most far-reaching legislation to date regarding the Palestinians. Introduced by Paul in the first week of the new Senate’s session, the Defend Israel by Defunding Palestinian Foreign Aid Act of 2015 calls for cutting all American aid to the P.A. until it withdraws its request for ICC membership.

The O.U., the leading group representing Modern Orthodoxy, welcomed Paul’s move in its statement for demonstrating “the importance of supporting our strongest ally in the region.” Diament later told the Forward that his group backs making the P.A. understand that there are “real world consequences” to taking unilateral steps. But this does not necessarily mean the O.U will endorse the bill, he cautioned.

Paul’s move to defund the P.A. also produced a softer tone from the RJC. Focusing specifically on the proposed legislation, the group said in a statement, “Senator Paul is right.” The RJC stressed the need to tie aid to the Palestinians to their adherence to the U.S.-sponsored peace process. But Matthew Brooks, the RJC’s executive director, declined a request to elaborate on the RJC’s broader view of Paul’s positions.

While no announcement has been made, Paul is considered a likely GOP presidential candidate in 2016, and early polls have shown he is a viable contender for the party’s nomination.

In recent months, Paul has held unofficial talks with RJC leaders, laying out his approach toward Israel and taking time to respond to concerns they have raised. But the group clearly remains reluctant to embrace Paul, as do many other Jewish activists.

“His goal is not to be No. 1 among Jewish Republicans,” said one activist who has been involved in some of the conversations with Paul. “His goal is to be acceptable, to pass the threshold.”

Paul’s effort will come to a test next year, at the RJC’s regular pre-election candidates forum. If Paul turns up on the list of candidates invited to present their pitch, an honor denied to his father in the past, it will be a clear sign that the Kentucky senator’s route to rewrite his past has paid off.