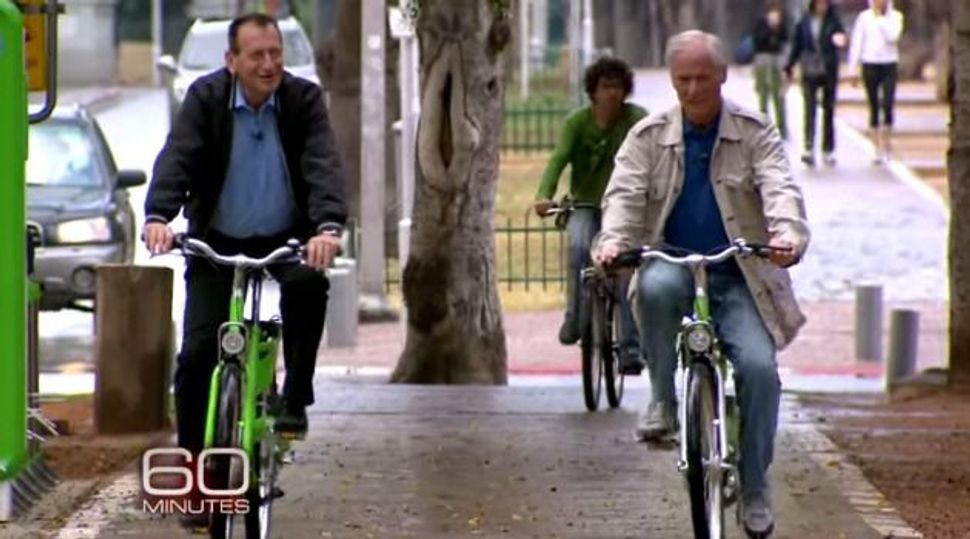 Riding for a Story: Bob Simon rides alongside Mayor Ron Huldai in 2012 for a 60 Minutes story about Tel Aviv. Image by cbs

The tragic death of Bob Simon in a car crash in New York last week has brought much attention to his remarkable career as a foreign and “60 Minutes” correspondent. For a significant part his life — over 20 years — he lived in Israel. It is there where we met, developed and continued a close friendship until his passing.

Our friendship transcended our professional differences: I was an advocate and the director of the Anti-Defamation League office, Bob was a journalist.

He didn’t much disguise his criticism of the occupation and settlement policies by recent governments of Israel, nor his opinion of some American Jewish groups for supporting what he considered Israel’s wrongheaded policies. Despite all that, our friendship endured and grew, reinforced by the many family experiences that we shared together.

Bob enjoyed living in Israel, where he and his wife, Francoise, had a cozy home in Herzliya Pituach and a warm network of friends. In fact, they continued to live there, even after he was named a correspondent for “60 Minutes,” and much of his work was done in New York. To be clear, he came to Israel for professional reasons, not religious or ideological ones. Bob’s attachment was more about the people, the culture, and a way of life. Israel is where he found a comfort level with his own secular Jewish identity, especially in the Tel Aviv area.

He was posted to Israel by CBS in 1977, as Bob’s luck would have it, just before the arrival of Sadat and the Camp David peace process. He regarded that as one of the great stories he was privileged to cover. He was there for the breakthrough agreement with the Palestinians in 1993. But those epic and optimistic events gave way to the intifada, and the seemingly endless Israeli-Palestinian conflict. He hammered away on stories about the occupation. It wasn’t about Bob taking sides, as he was often accused of doing. Rather, it was about consequences of the occupation, the injustices and indignities.

Bob was well acquainted with the refugee camps in Gaza, the settlements in the West Bank, and the Arab neighborhoods of East Jerusalem. These were places few Israelis ever went, unless they were in the IDF or taking their cars to be serviced in the cheaper garages in Jerusalem. (This was well before the eastern part of the city became infused with Jewish population.) He reported on the barrier wall that separated Israel from much of the West Bank, passing through towns and dividing families. He had seen the occupation up close and didn’t like what he saw.

Since he covered the rest of the Middle East, and had done so since 1973, Bob could and did appreciate what Israel had achieved, despite the challenges. He reported on the corruption and repression of Arab regimes. He saw how the Arabs used the Palestinians as pawns to deflect attention from internal failures. He was well aware of the enemies surrounding Israel. Still, he felt — like so many Israelis — that the occupation was morally wrong and strategically untenable.

No one could capture the nuances of Israel for the foreign viewer as well as Bob. One memorable story was about the Israeli game matkot, a version of paddleball played on the beach, where the idea is to volley the ball as hard and loud as you can. He saw it as a metaphor for the Israel-Middle East situation. “Noisy, no rules, no winners, and it never ends,” said Bob, with that touch of irony for which he was well known.

Last year, for “60 Minutes,” he did a masterful piece on Tel Aviv, capturing the paradoxes of the cultural entertainment oasis in the midst of the Middle East cauldron. 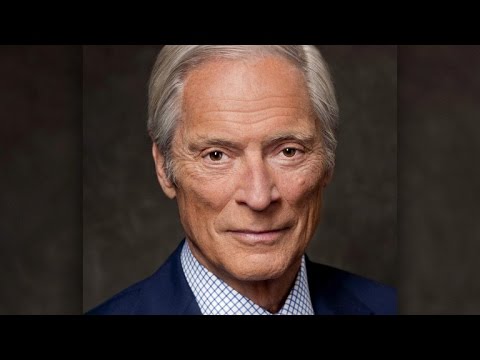 He was something of a celebrity in Israel, as his reports were often carried by Channel 1, for many years the only broadcaster. He was frequently invited to TV studios to comment on international issues.

In Israel, he was known as “Bub,” mainly because Israeli diction doesn’t have the long “a.” Often, when we would go to a restaurant, people would come by to say, “Hello Bub,” and freely voice their opinion (as Israelis do) about a broadcast, or media attitude toward Israel. Bob was always gracious.

Bob didn’t bask in his celebrity. Not that he was unaware of his fame, or its benefits. But he was not interested in talking about himself. The many journalism awards, including 28 Emmys, were not on display at his home.

What you would find at his home were books. He loved reading, mainly fiction. Among them, Israeli writers David Grossman, Amos Oz and Yehuda Amichai. His favorite author was Philip Roth. Bob had read all of Roth’s novels, which were chronologically arranged on the bookshelves of his home office. The writer clearly struck a chord with the Jewish kid from the Bronx.

Ironically, Israel, a country continuously in conflict, was a retreat for Bob. It is where he returned after being released from an Iraqi prison in 1991 and it is where he would recharge from covering one faraway and demanding story, before flying out to do another.

The one Israeli leader he truly appreciated — and in a way resembled, each with a quiet, self-effacing manner — was Yitzhak Rabin. Bob and Francoise often played tennis with the Rabins. And though Bob was a competitive player who hated to lose, he was generous with baseline calls. Rabin, who also didn’t like to lose (I was also an occasional tennis partner), was in a better, more talkative mood if he won, as Bob once said with an easy smile.

Rabin’s assassination was turning point for Bob, as it was for so many others. Both personal and professional. Religious zealotry on the part of a Jew had led to the murder of the one leader who Bob thought could steer Israel out of the endless conflict.

Bob was not at all religious or observant in the least. Being Jewish for Bob was part ethnic, but mostly cultural. Born in the Bronx, raised in Long Island, educated at Brandeis, and with more familiarity of Israel than most American Jews, Bob’s connection to Judaism was in his life story. But it was subtle. Except for the jokes. A great storyteller, on camera and off, he loved Jewish jokes, the more Borscht Belt the better. He also did a pretty good imitation of a Yiddish accent.

Bob left Israel to move permanently to New York in 2007. But for over 20 years, he found himself at home in Israel. It was an important chapter of a remarkable life.